This was our first day walking the Cumbrian Way, so we really didn’t know what to expect. It was a super long day and crossed a lot of varied landscapes. It was also the learning day. Learning how to read our map and navigate with book directions. It was learning what a stile was and how to use one. And just in general learning how far we could push ourselves.

Our first day started in Ulverston at the Cumbria Way start pillar and ended in the town of Coniston 15 1/2 miles away. It took us 9 1/2 hours with a bit of time for lunch and breaks. 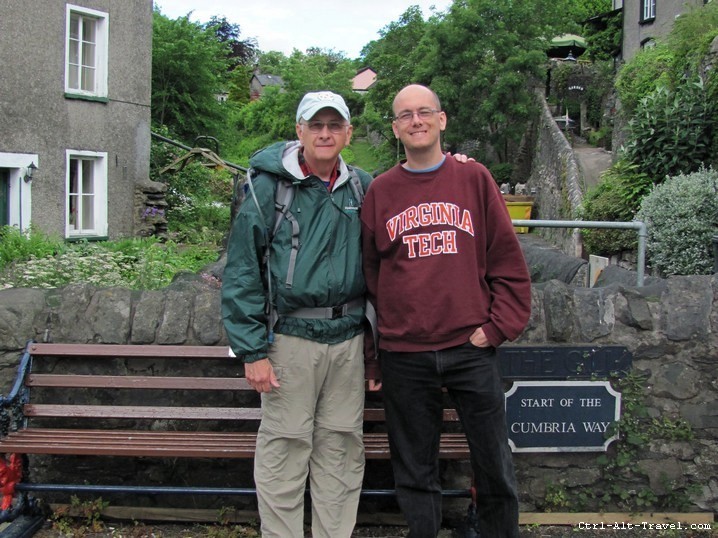 As a part of our booking with the trekking company we got a waterproof map and a book with written directions. At breakfast the morning we left a group of hikers who had just finished the hike gave us another book of directions. It was older (2005), but we found we liked its directions a lot better. Once we understood how to read them and what actually constituted a trail. 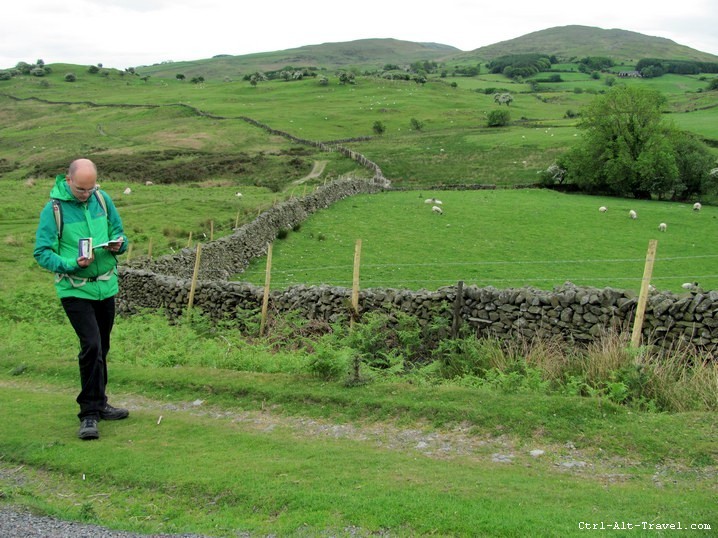 The map was good of judging distances and how far we were until the next break. It also helped put some sense to the book directions. At times the book would say “follow this cart track until it hits a bigger road.” This could mean 100 yards or a mile. 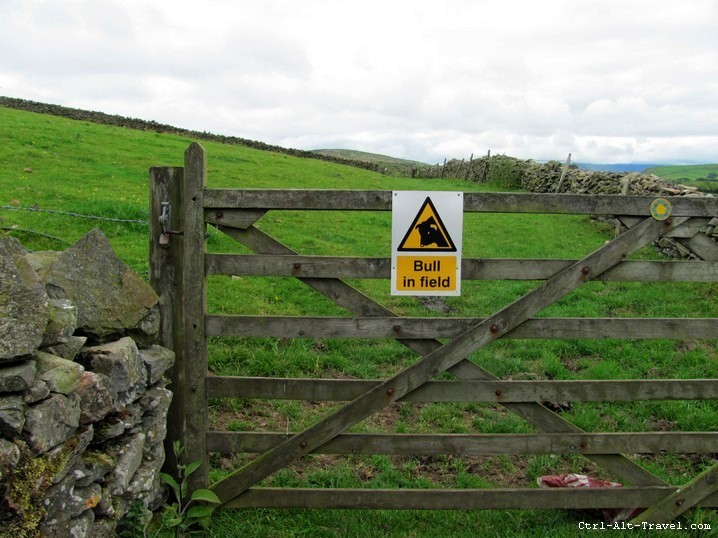 The beginning of the Way goes through several nice forests out of Ulverston and felt like any other local hike, then it let out into a road. This is where we got lost for the first time, not 10 minutes from the start. See I expected a trail with markers and such. I saw the gate that the book mentioned, but it looked closed and locked to me. Of course we wouldn’t be tramping through open fields and other people’s farms, right? Of course I was wrong.

We walked the wrong way for a bit before turning around and seeing a pair of blue backpacks bouncing along the way over a field. We figured out where they went and learned that yes indeed you are going through gates on the Way. Public footpaths apparently go across private lands. And “path in the field” essentially can be just a line of tramped down grass. This was not exactly the trail I had in my mind, but it made sense now that I have seen the entire trail. It did add to the Hobbit-like feel that I had been going for when I first envisioned the trip.

It was beautiful though, walking through the lush English countryside. Sheep baaing and such. A thousand shades of green cover rolling hills. 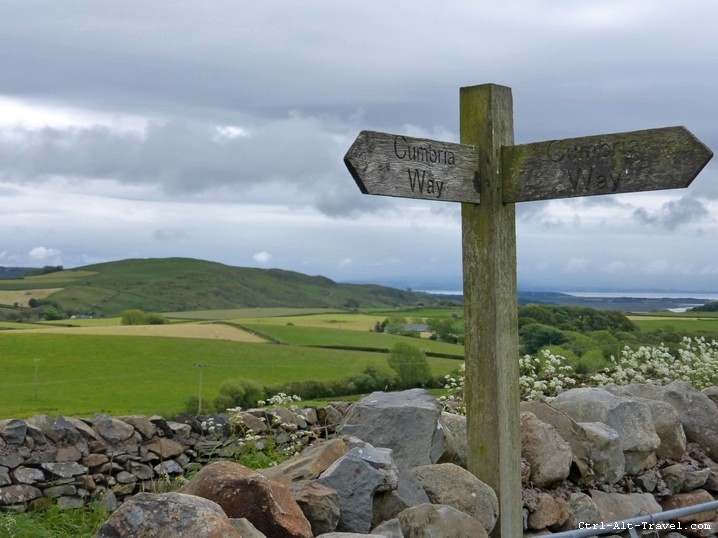 Each day of the walk had its own challenge. Day one had several. First was the sheer length of the day. We had no idea what it would be like and 15.5 miles is a long way to walk. Dad had been practicing ahead of the trip with 8-9miles, on a smooth paved track. This terrain took us a lot longer.

The terrain itself was the second challenge. Green fields are nice from a distance, but are muddy and several we walked through were churned up by cows, so wasn’t level walking. This probably seems like the complaining of a city boy, but it isn’t meant that way. Challenges are meant to be overcome and this was one of our challenges. The other part of fields that slows you down are the stiles. These are rather clever sets of steps built into the stone walls that let humans over but keep animals in their pen. They too just add a bit of time to the trip. 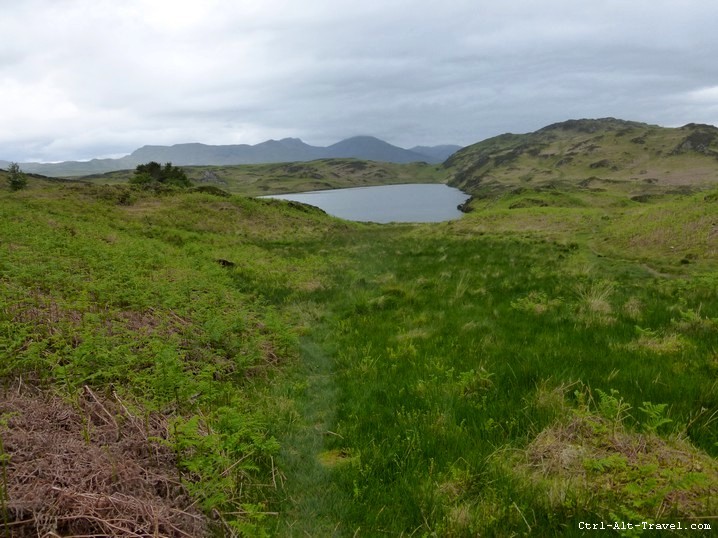 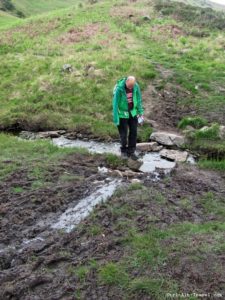 Cumbria is also known as the lake district, so I thought I would point out the lakes we walked by. Beacon Tarn was the first lake we hit on the entire way. We saw it by mid afternoon and spent a bit of time going around it. Our chosen way was the “low path” because we had just climbed over a bunch of hills, so the rocky “high path” wasn’t so appealing.

The low path though goes through boggy land, so it was probably equal from a time persepective. I guess I should not have been surprised with the amount of boglands we went through on the Way, but I was. With so much rain in the region, it has to go somewhere I suppose. And yet with so much grass, the soil actually holds onto a lot of it in the form of muck.

After the Tarn, which is a type of glacier built lake, came the mosslands. This is where I learned the value of the map as the trial disappeared nearly entirely through the mossy ground. We picked our way across the rocky bits and of course we made it though.

Geek Alert: I’m a 90’s geek, and as such I played a lot of Magic the Gathering as a teenager. It was at this point of the trip that I realized that we actually were walking through all 5 of the land types in the game. Fields, forests and mountains were pretty easy to see, and now I was slogging through a swamp. Maybe it was a bit of a stretch at this point, but we were in England which is an island. Although later we did actually see islands in Derwent Water, so I felt better about it. I wonder if Richard Garfield ever did this walk. 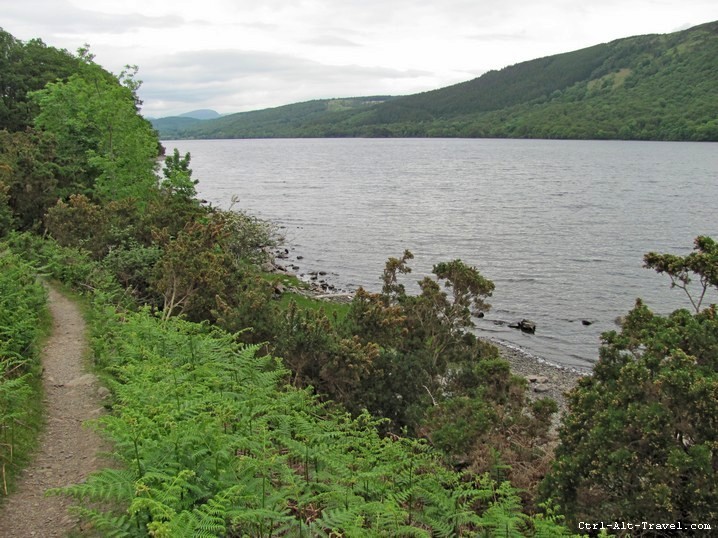 After the mosslands, the trail dips through some hills and a forest, crosses a road and merges with the local hiking paths around Coniston Water. This is a very large lake that we walked by for several hours. There is a boat launch that does rounds, but we only saw the docks, never the boat. At this point of the day, we were totally exhausted and just wanted to get to our bed.

We had also not seen many people on the first part of the trail, but at this point we started to see more. There are camping grounds and parking lots around the water. There were people out running or walking their dogs. I felt like screaming, “Hey I just walked here from way over the hills, did you guys just drive?” I of course didn’t say a thing.

After a longer walk than we expected, we stumbled into Coniston to find our guest house. Since we got there a lot later than we expected, the lady who had the key for the door had already left. A friendly guest pointed out a sign with a phone number, which I called. A few minutes later we slogged our nicely delivered bags and our tired bodies up to the room and then out to the Black Bull Pub.  We were so exhausted at that point that it was nearly a blur. I remember we had a pair of slightly overcooked burgers and I had a nice dark beer. Then we collapsed into bed in hopes of a good night sleep. The bed wasn’t bad, but the sun coming up at 4am was a bit counterproductive.

Learnings of the Day

Photo Credit: The pictures with people in them and the one of Coniston Water were taken by my dad. Thanks.