Kissing Gates and Styles of Stiles

Dry Stone Walls separate sheep from more sheep as they criss cross the Cumbrian landscape. Wooden fences and wire fences cut across fields. The land is divided and quartered, but there are always ways over (for humans.) This was one of the most fascinating parts of walking the Cumbria Way to me. We were on what seemed like private land from all the fences, but definitely on a public footpath, so we had right to go through. So much of day 1 involved climbing over walls and through gates. Our navigation book taught us a few new terms, the Stile and the Kissing Gate. These things are all about figuring out what humans can do that animals cannot. 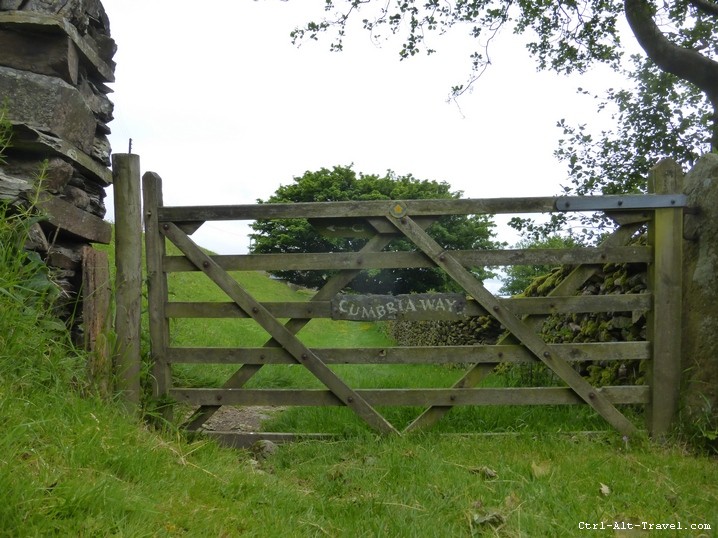 There were definitely plenty of “normal” gates on the Way. Big swinging gates large enough to let a car drive through. Smaller latched gates for human passage. They ranged from fancy systems of springs and shiny metal latches to humbled orange rope used to keep the livestock from leaving. I liked the closing systems the best. Some were set up with springs. Others were weighted rocks that seemed much more elegant for their simplicity. 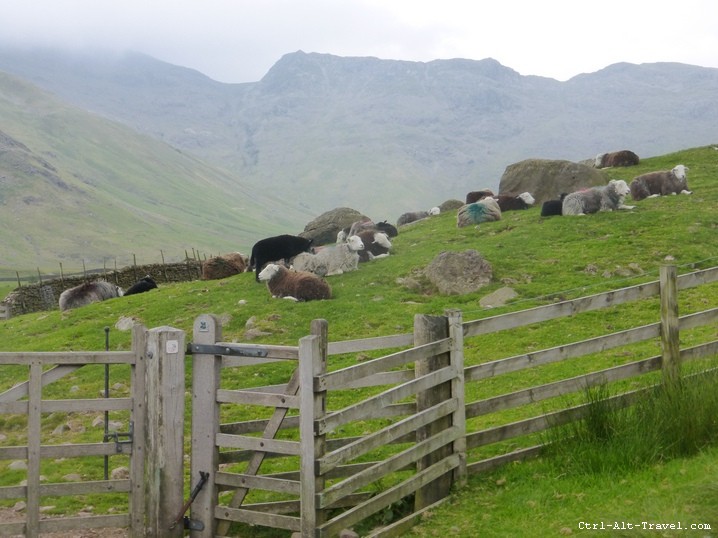 Then we come to the idea of a kissing gate. The whole point of gates and stiles seem to be in keeping livestock in and allowing humans to go through. In comparison to a normal gate, a kissing gate has no latch. It is a swinging gate inside of a U shaped piece of fence. The gate can swing and “kiss” either side, but never fully open. The idea being that the U is too small for a sheep and they cannot pull gates, only push. Almost like “child safe” top for a pill bottle, but in gate form.

As a human you push the gate away from you, to enter the U. Then pull the gate across, hopefully not scraping your own belly as some of the Us are small, then leaving. There was usually a spring to keep the gate on a specific side if not forced.

Dry stone walls are very common in the region. So what do you do when you have a really long stone wall that has been there forever and you don’t want to put a gate in it? Well you build steps into the wall, of course. These were the coolest contraption of the trip for me and really mostly because there were no moving parts. Pretty much in the building of the wall at a certain point, the builder included several longer stones as steps. The stones go all the way through so make steps on either side. 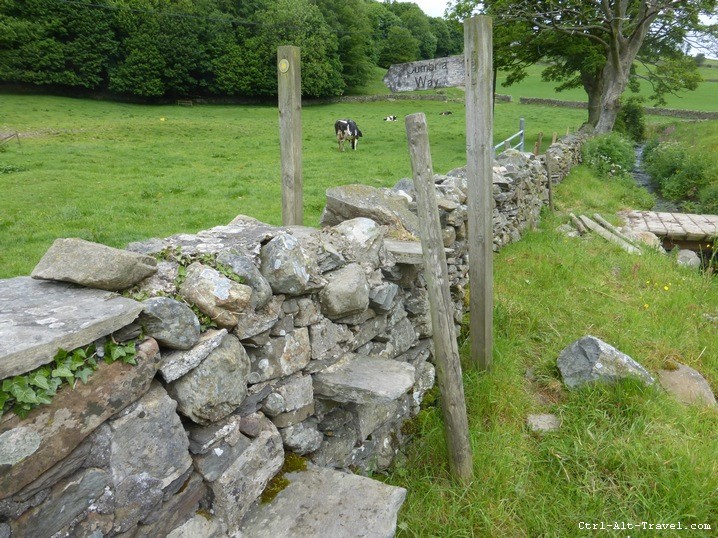 This is where the variation kicks in.  A lot of the wall stiles we came across has wooden poles planted next to them. In this style of stile, you hold onto the pole and climb over the top of the wall. Usually there are only three steps to use, so short people beware. 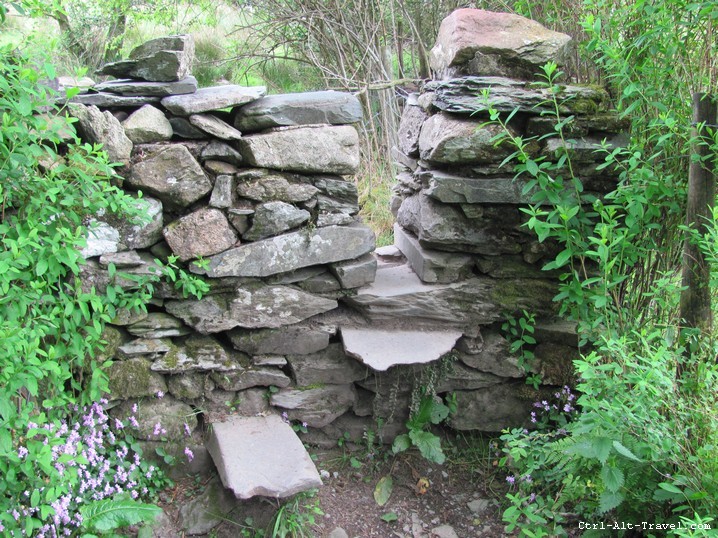 Secondly, there were wall stiles that did not have poles, but actually a gap in the wall itself. So you weren’t climbing up over them, but up halfway and through a hole, so you could hold onto the top of the wall. Even still, these holes were narrow.

I’m perhaps taking liberty with the last term of “Ladder Stile”. I definitely did see ladders built into walls, but not like these. I just like the term, so I’ll use it for the stile constructions that were made out of wood to cross a wooden fence instead of built into a stone wall. The construct was nearly the same as above with the poles, but were a set of wooden steps instead of stones. The really interesting part about them were the “doggy doors” set in a lot of them. 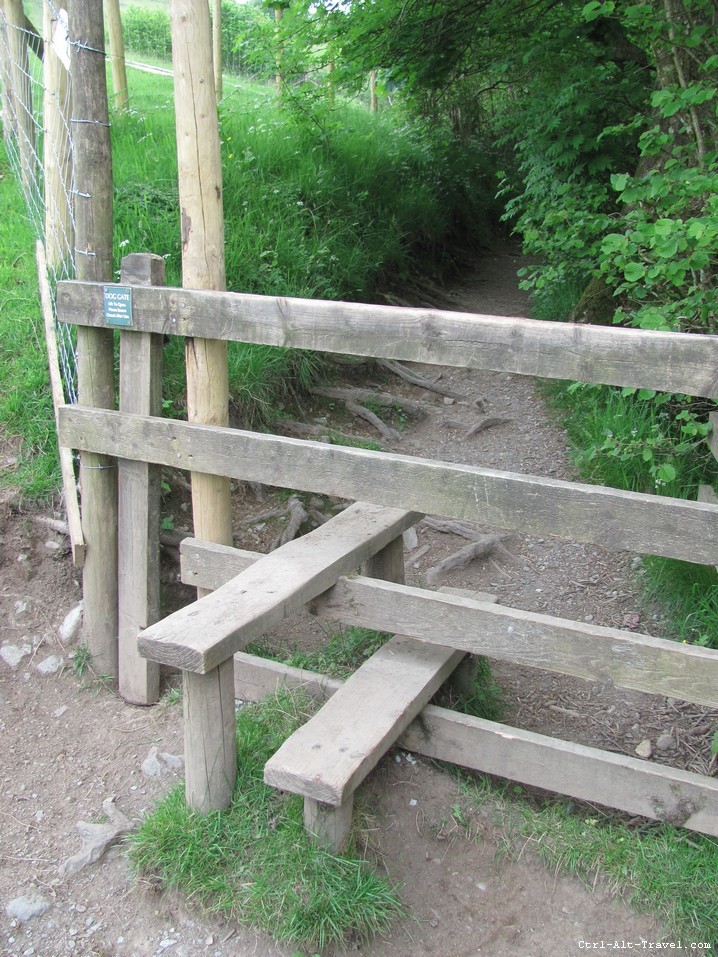 Since we were on public footpaths and the English love their dogs, it make sense that the paths would be used to walk dogs. Stiles and such were explicitly built to be used by two legged things (humans) to exclude four legged things (sheep). So what is a dog to do? Obviously if you have a tiny dog, you could carry it over, but at some size your own need for balance and the need to hold onto the pooch gets compromised. So there are doggy doors. A small hole next to the steps with a piece of wood that can be pulled up. I have no clue what you do if your dog is bigger than that hole, but I’m sure they manage somehow.

More on Stiles and Kissing Gates at Wikipedia.