One of the great joys of travel is exploring local food as you go. My dad and I walked a portion of the Cumbrian Way this June and encountered a lot of great food. England isn’t particularly well known for its food, but I think that is a shame. We found a number of great things. 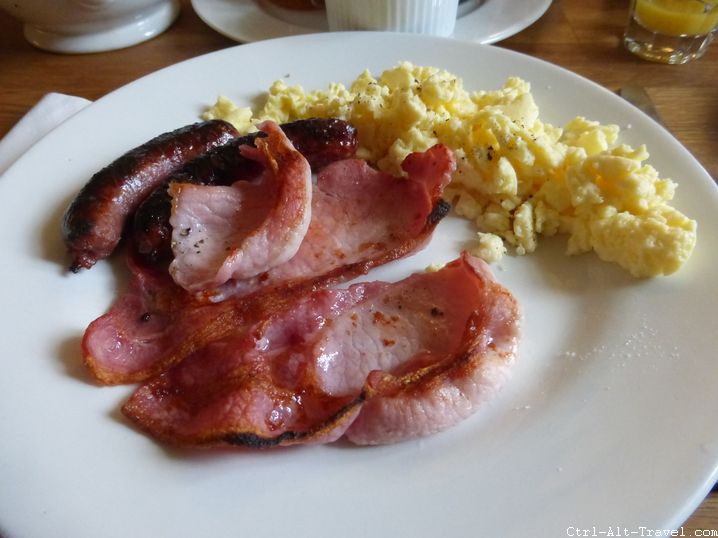 When you walk 8-15 miles a day, a good breakfast is paramount. This picture doesn’t even do it justice. I just wasn’t up for toast that day. A traditional “full english” is a heaping plate of food. Eggs (usually poached), beans, bacon, sausage, toast, tomatoes, and blackpudding. Add a few cups of tea and you are ready to go. That is the traditional spread, but each guesthouse we were in had a different subset of this, but eggs, bacon, toast and sausage were everywhere. Most of it in the rural areas that we were walking seemed like it was local sourced as well.

So a quick word on the bacon. If you are an American, when I say bacon you are probably thinking of long strips of red and white streaked bacon that is fried in a pan. English bacon is different. It is thicker and the fat is around the edges. More what we might call Canadian Bacon. Still lovely though.

Cumbria is also home to Cumbrian Sausage. I had it at breakfast most mornings and saw it listed with onions for dinner at pubs. It was pretty tasty too. The sausages are thick and spiced. Read more here: https://en.wikipedia.org/wiki/Cumberland_sausage 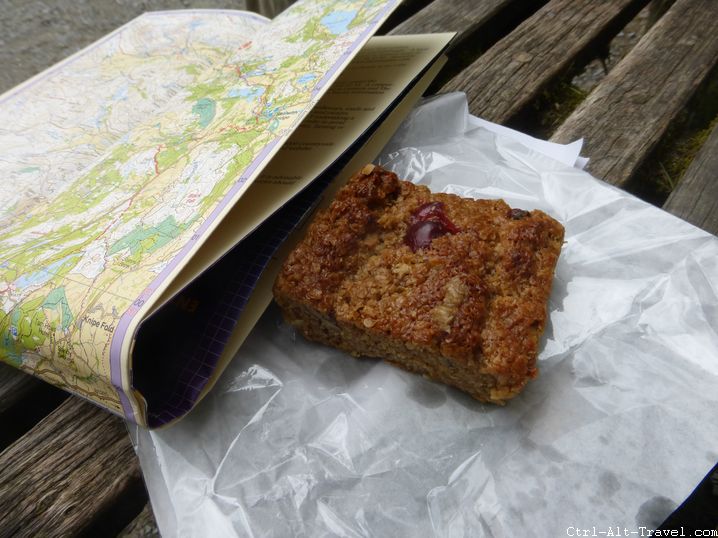 So again an American vs British term battle. The word Flapjack to me is a slang term for a thick fluffy pancake. Flapjacks in Britain are something different. They are more like a very sweet granola bar with oats, but I saw a range of flavors and sizes. These ranged from a box of packaged flapjacks from Tesco to a wonderful Cherry and Walnut Flapjack from our hotel cafe in Coniston. Definitely a nice mix of sweet and fiber for quick energy on the trail. 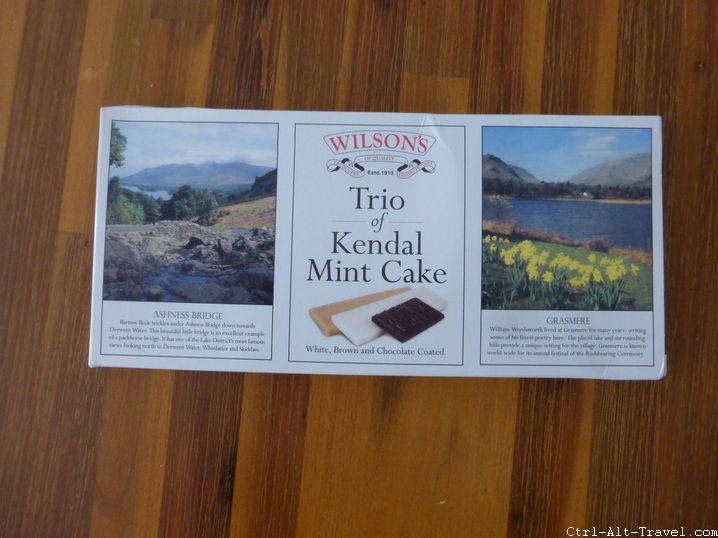 We spent a few days in Keswick, which is in the center of the hills and a pretty major tourist town. Before coming to town, I was told by a guy in Berlin to look out for Mintcake. It is apparently native to nearby Kendal, but Keswick definitely had it for sale in a ton of places.

Mintcake is super sweet and comes in a few different types: white, brown and chocolate covered.I found a lot of it in bar form and a few bags of little drops. The chocolate covered is similar to a York peppermint patty, but a lot firmer. The white and brown have no outer covered and to me are even more firm. Texture wise it is solid enough to handle without sticky fingers, but soft enough to bite through. Again a great form of energy for hikers and climbers, but probably just adding to my waist as I snack on it at home from my couch. 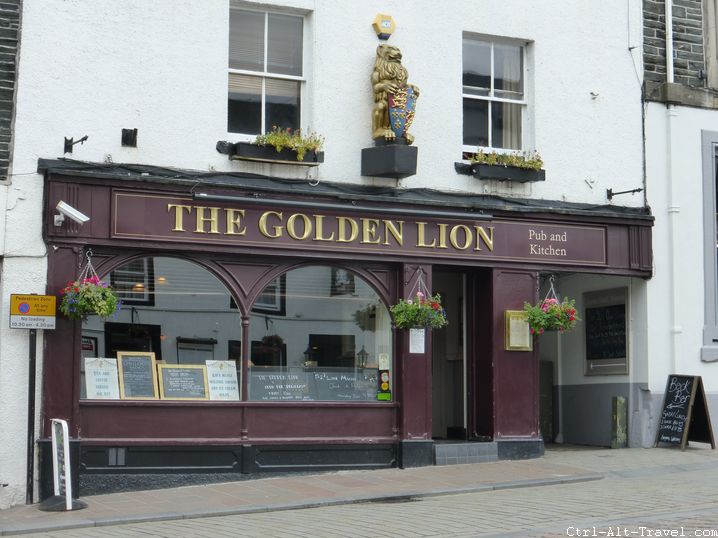 When talking about British Food you cannot skip the ubiquitous Pub. In every town we walked through there was a pub. This was our main dinner meal almost every night. Pub food is usually pretty standard and not high falutin, but usually hearty and tasty. Burgers and Fish and Chips were a common sight on menus, but so was Chili con Carne and poached salmon.

I definitely enjoyed the pub atmosphere. You find a table in the bustling room, note the number on it, then go to the bar to order. They then bring your food to the table (assuming you remembered your number right.) Beers are given straight from the bar. It was nice to have already paid for the food. 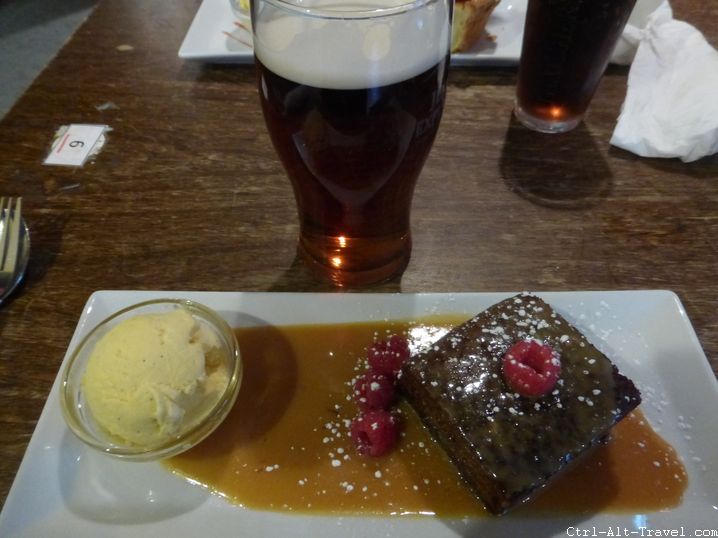 Walking was strenuous enough that I felt ok getting dessert every night on the trail. And dessert was this thing, called Sticky Toffee Pudding. Pudding is the generic term for dessert in Britain it seems. This particular one is a nice slab of sweet cake with a bunch of sweet toffee sauce poured over top and more often than not a scoop of ice cream. 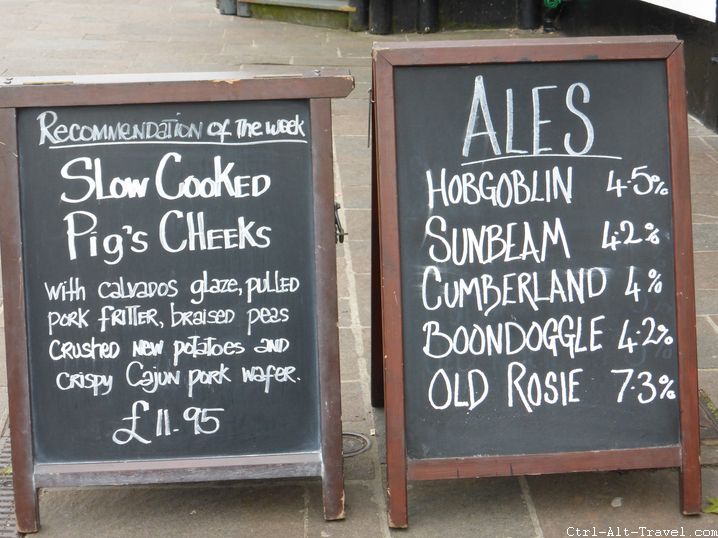 Yay beer. As much as I do like German beer, it can get boring. British ales are interesting and widely varying enough to keep my attention. I also loved that the pubs had little glass containers with a bit of the beer in front of each tap, so I could see at a glance which were the darker ones and which lighter. Overall the alcohol percentages were lower than I am used to from Germany, but there were a few higher ones in the mix as well.