This was our final day and we knew it deep to our bones. We had accomplished the mountain leg the day before and two more days before that. We had already fully acknowledged that dad and I are novice hikers and we were sore. According to my map, this was a less scenic day as well. And finally the day began in rain. It was not a bad walk, but after the rest of the days, we were tired of it. 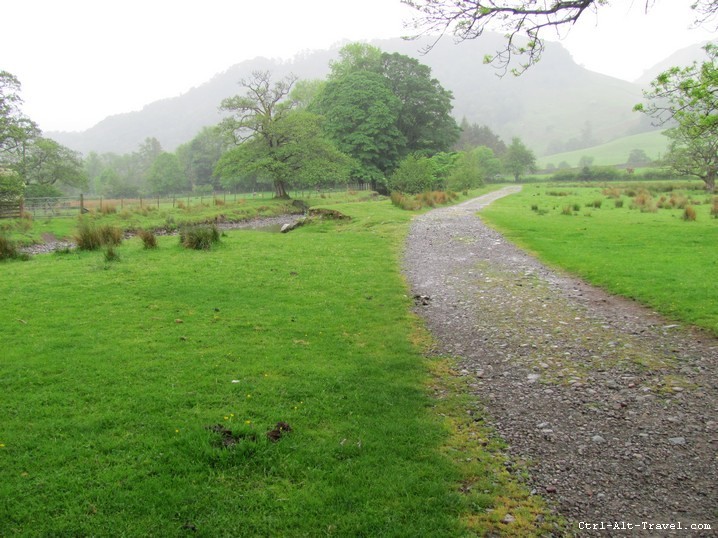 We had known that rain was a possibility on our walk. It was England after all. When we asked a local about the weather, they would more often than not just shrug and say “who knows, maybe sun maybe rain.” The first three days of the hike had been really great weather. For the most part clear and yet not so sunny and warm as to make the hike uncomfortable. This was not the case on the last day. 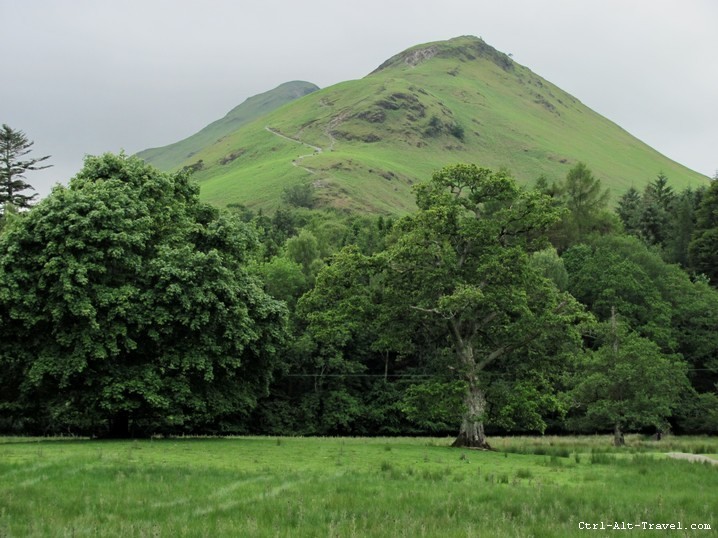 We left Rosthwaith later than we had planned due to a bit of a slow breakfast service and pulled out all our rain gear. It wasn’t a heavy downpour, but far more than the few drops and wet mist we had seen so far. I was happy for the waterproof map and for fact that our path was pretty straightforward. I wished for a waterproof book a few times before noon, but otherwise we did fairly well. We only needed to pull out the book in the drips once. 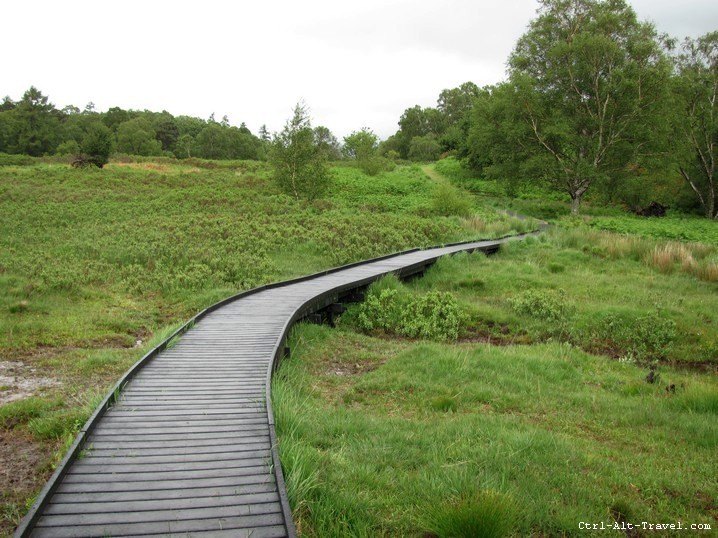 Rosthwaite is in a valley called Borrowdale which tracks north toward Keswick. This is the first half of the day’s walk before the lake. The path is pretty flat in comparison to previous days and we actually made really good time despite the rain. There is a lot less up and down, though a few hills still made their presence known. There is even a few stretches of wooden paths above the bogs around the bottom end of Derwentwater. By the time we made it to a lunch rock, the rain had stopped.

The Derwentwater is a large lake extending south from Keswick. Half of the day is spent walking around this lake. It is pretty big and pretty popular, so the paths are nice and the trails are well labeled. A lot of hikers from Keswick use the boat route around the lake to land at various piers and head up any number of local fells. So this ended being a busy place. 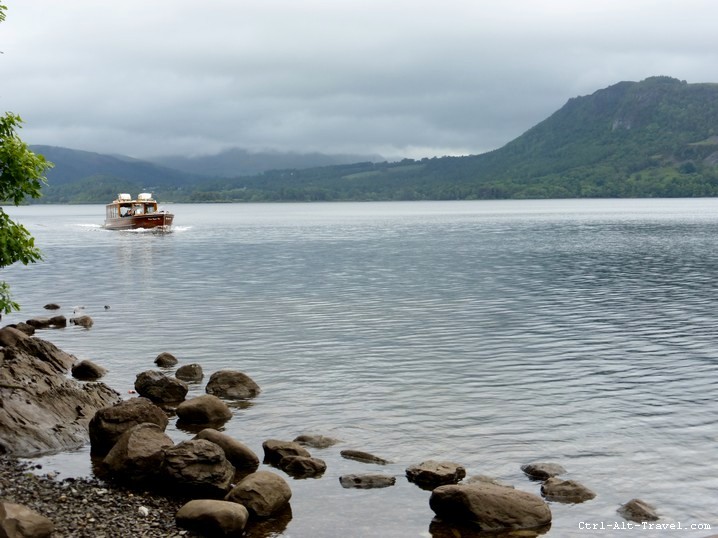 We were so happy to have an easy-ish day of walking and were quite happy to see the buildings of Keswick peaking out around the lake. This time really became dad and I discussing the trip as a whole. We could see the end and although we knew we had more time together in the area, we were happy to not have any more long distance hikes. We talked about how impressed we were that we climbed a mountain and how we probably would have split day one into two. It was a good time to just walk and talk.

Keswick is a pretty decent sized town, with several grocery stores and a bustling downtown. It is also a tourist hub, so hotels, pubs and tourist abound. After spending several days in various stages of wilderness, I was perfectly happy to be in a town again. We had booked several days here since we had heard of several day hikes from town. In the end, we didn’t do any of the big hikes, but did do a pair of small ones to Castle Head and Castlerigg Stone circle.

I really liked our time in Keswick. While I am immensely proud of us on our walk, if I were go to the area again I would base myself in Keswick and do hikes from there. 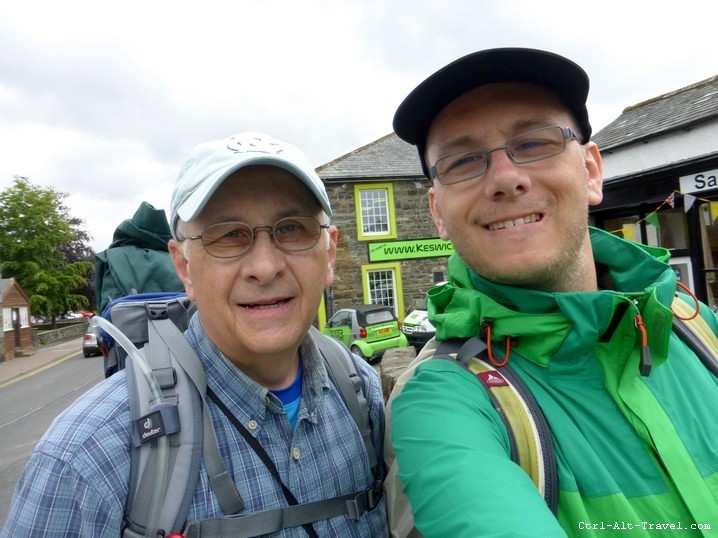 So yes, we only walked 43 miles of the total 72 miles of the entire Cumbria Way. Even still I am super proud of how we did. It was a really wonderful trip despite (or perhaps because of) the challenges we faced. We did a 15 1/2 mile day across sheep fields. We walked so many miles of rocky uneven paths. We crossed over a mountain in a matter of hours. It was four days of father son bonding and camaraderie and it was a good thing.

We also saw tons of sheep, climbed over a ton of walls, through so many gates and ate at a bunch of really great pubs. 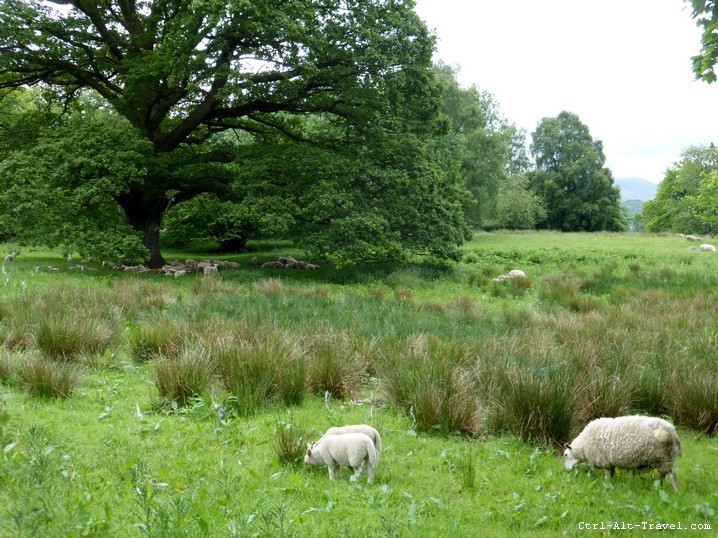 Handsome Sheep What we did around Keswick