Germany is the land of beer. It is perhaps best well known for its beer and for festivals celebrating said beer. It doesn’t help you enjoy it though if you can’t order or don’t know what you are ordering. So here is some German beer vocabulary with translations and explanations. Yes, you could just order “a beer” and be perfectly fine, but isn’t it nicer to understand what you are doing. 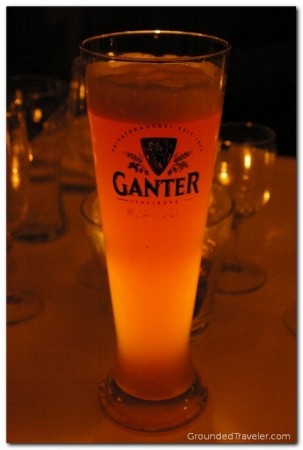 Ein Bier, bitte – “eye-n beer, bit-eh” : A beer, please.
This will most likely get you whatever is on tap and local. Almost every restaurant has an agreement with one brewery or another and will have that brewery’s beer as a standard on tap.

Noch Mal – “noch mal” : another.
Especially when pointing at an empty glass, this will get you another of the same thing you are drinking.

Zahlen, bitte – “zal-en, bit-eh” : pay, please.
When you are ready to pay, this will get you the bill. Definitely know your limit and drink responsibly. Germans have had their entire life to practice drinking and while sometimes get boisterous are better at not over drinking than most English speakers.

Reinheitsgebot – “Rine-hites-ge-boat” : Purity law (for beer)
This is the law from the middle ages that declared that beer in Germany may only be made from water, malted barley, hops and yeast. The Reinheitsgebot is still in force today.

Flasche – “flash-eh” : bottle
So of course the opposite of on tap is in the bottle. 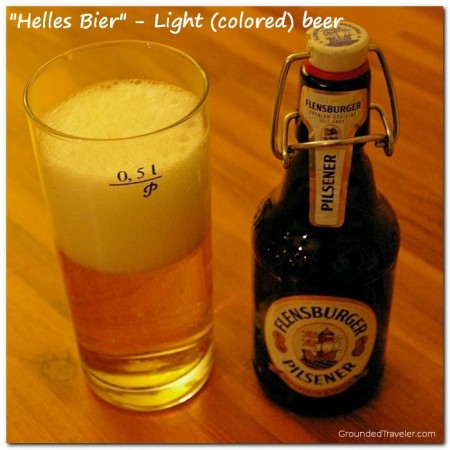 Types of Beers and how to Describe them

While you certainly can order just “a beer,” it is also reasonable to order the type that you are interested in.

Pils – “pills”
A Pils (or sometimes Pilsner) is very common type of beer in Germany. It is pale yellow and usually clear. Ali seems to think it tastes just like any beer in the US. While much of what you might remember from Keggers in college were types of pilsners, do not let that stop you from trying them in Germany. They do them well here. This is the type you are most likely to get when you order “a beer”.

Weissbier or Weizen – “vice-beer” or “vy-tzen” : Wheat beer
Weissbiers are made from wheat instead of barley. They are not often filtered so will appear cloudy with the remaining yeast from fermentation. You can find them ranging from dark to light. Because the yeast often remains in them, they are slightly sweeter and less bitter than Pils.

Helles – “hel-es” : light
This implies a light color. So a beer with a more yellow color. I have yet to find a “lite” beer in Germany. They do make alcohol free, but not reduced calorie.

Dunkeles – “dunk-el-es” : dark
The opposite of light, a darker colored beer. Dark can range from a nut-brown to a near black like Guiness.

Trub / Krystal / Klares – “troob” / “crystahl” / “clar-es” : cloudy / crystal /clear
Beer ferments with yeast that is normally filtered out. If it is not, the beer is call “trub” (cloudy). The local breweries in Freiburg both have beer that is “trub”. My favorite micro brewery, Feierling, only makes cloudy beer, even though it is a Pils that is normally clear.
While Pils are normally filtereed, Weissbier are normally not. However a Krystal-Weizen is a Weissbier that has been filtered.
“Klares” would just describe a beer of any type that is filtered and clear

Radler – “rad-ler”
A Radler is a mix of beer and lemon soda. The British call this a Shandy. It makes the beer a bit sweeter and cuts the alcohol a bit. Nice if you need to slow down a bit near the end of the night or just want a more refreshing beer in the summer.
There is also Saueres Radler “sour-es rad-ler” where fizzy mineral water is used instead of soda. I like that better as I find the sweet of the soda changes the taste of the beer too much. 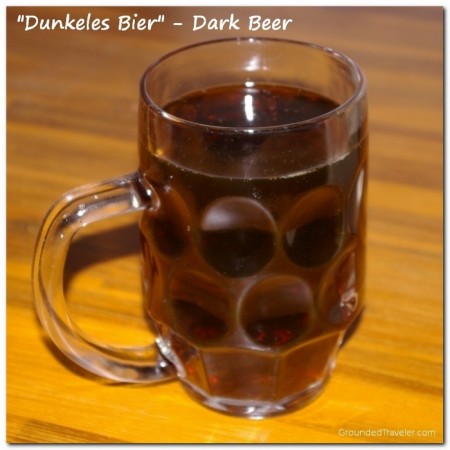 Once you get to ordering your beer, the question you might get is “Welche Grosse?” (which size?)

Klein – “kline” : small
A small beer. In most places that I have been in this is a 0.3 Liter glass, which is a tiny bit less than a soda can.

Gross – “gross” : large
A large beer. This is normally a half liter glass, which is slightly less than a pint. This is kind of the standard “beer” that you probably picture.

Null Drei, Null Vier, Null Funf – “nul dry”,”nul fear”,”nul foonf” : 0.3, 0.4, 0.5
Every glass in German restaurants is measured. There is a little line that the drink is filled to and it is labeled. This is a quantity control thing. Things are measured in liters, so these words are saying how much of a liter is in the glass. 0.3 is about the size of a soda can. 0.5 is a bit smaller than a pint. And 0.4 is obviously in between. Sometimes you hear these instead of just small and large. It should also be listed in menus with these sizes.

Mass – “mass”
A Mass is a one liter mug of beer. Check out pictures of Oktoberfest. Those glasses the women are carrying are one liter Masses. It is extremely common at Oktoberfest and rare everywhere else.

– – –
Beer is definitely something to try in Germany. It is quite cultural and sitting in beer gardens can be a good way to meet locals. Germans are passionate about their beer, especially their favorite (usually local) brewery. This set of German beer vocabulary should be enough to get a start into ordering beer. And even though most Germans do speak some English it is nice to reach out their language, especially for a beer.

Not So Into Museums Inside the Blue Mosque