The center of old Munich is dominated by big things. The most well known is probably the Rathaus with its rows of pointy spires and Glockenspiel, but there are others in the area. One at least that you can climb is St Peter’s Basilica and its tower. Also called Old Peter, the church is nestled between the Viktuellenmarkt and Rathaus Square. I’d been to Munich a few times before I realized you can actually climb the tower. I like looking down on cities from above, so here is a view of Munich from above. 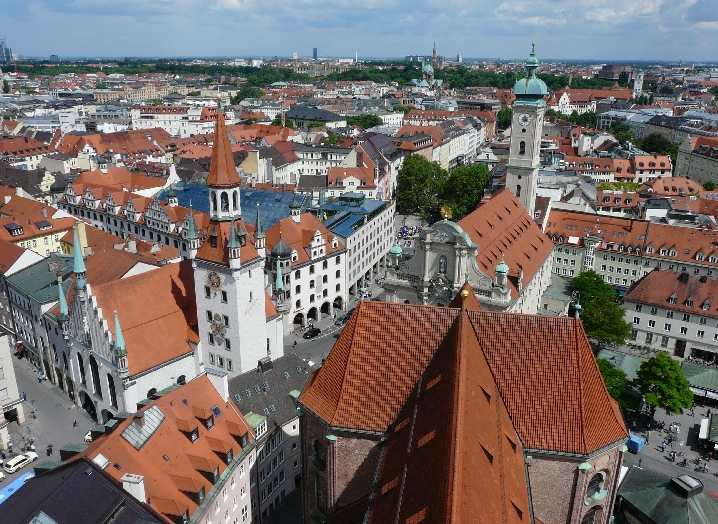 Peter’s church is apparently the oldest church in the area. According to the history sign in the stairs a Romanesque church on the same grounds dates to 1050 even before the founding of Munich as a city. Despite its size and historical interest, church doesn’t have a massive square like some in Europe. Buildings hug the edge of the plaza making it seem like the church is rising from the city. 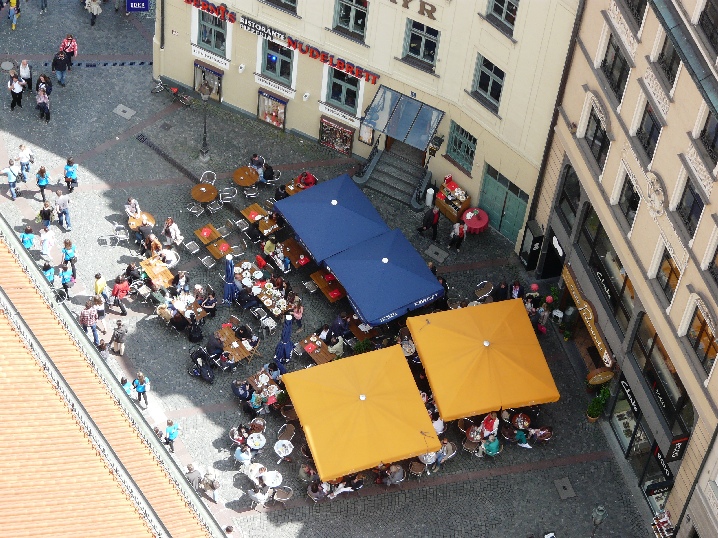 The tower is nearly 300 feet tall, so has a good view of the old town. The entrance is on the outside right under the tower and they only let a certain number of people up at a time. We were pretty lucky with our timing. We didn’t have to wait very long for our turn to climb the tower.

There are 306 steps. In contrast to some cathedrals which have a spiral stone staircase, Old Peter’s tower has a hodge podge of straight staircases that wind around inside of the square tower ever upwards. The are a number of quite narrow gaps, so I would not recommend carrying anything big on your back.

The viewing platform is enclosed with fences and quite tight in places even with the limit of people. Bring your patience.

It costs 1.50Euro to climb and the winter and summer times can be found here. 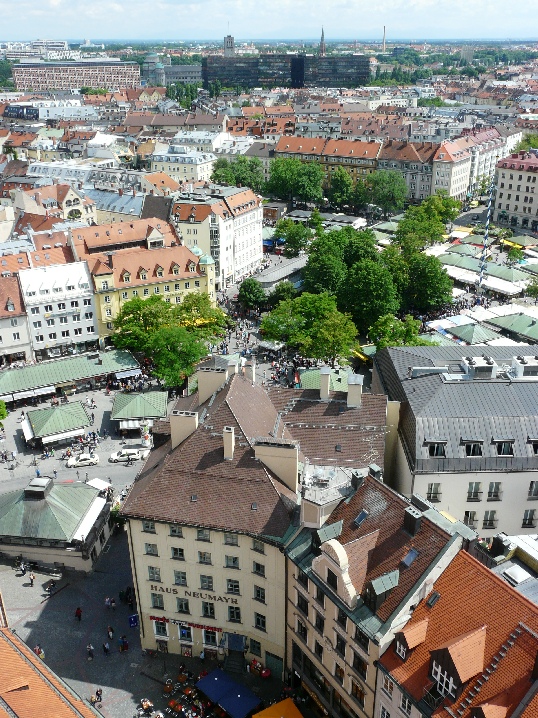 Viktualienmarkt (where we would end up just a few hours later for some nice beers) is just over a ridge of buildings from the church. The green awnings and big blue and white maypole stick out easily.

When you think of Munich architecture, this might be the image that comes to mind. The spiky Rathaus (“City Hall”) sits on the central plaza of town. One of the best parts of climbing the church tower is actually being able to get this view. 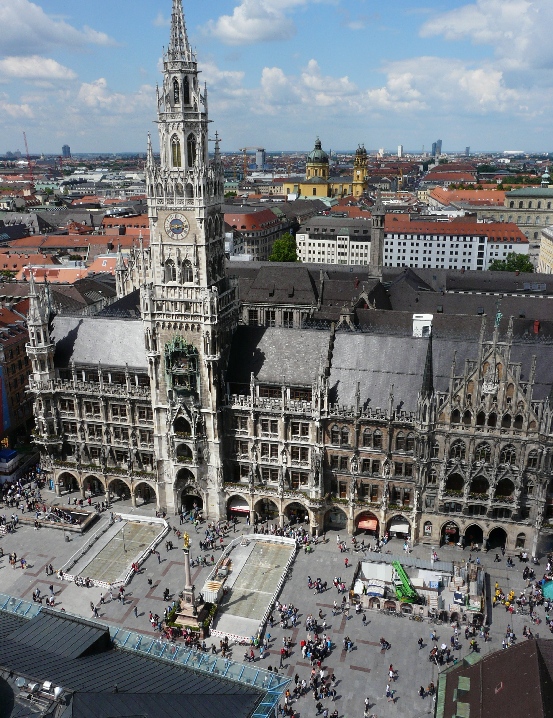 A big of zoom-work with my camera showed off some detail of the building. Here the ornate clock face. Aren’t the X’s funky. 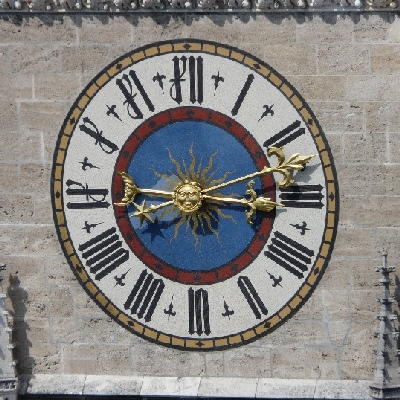 And the famous Glockenspiel. In classic German fashion, Glockenspiel literally translates to “Clock Play” or “Clock-Game”. So this is a close up of Munich’s playful clock. It goes off only a few times a day, but the figures are still interesting to see. 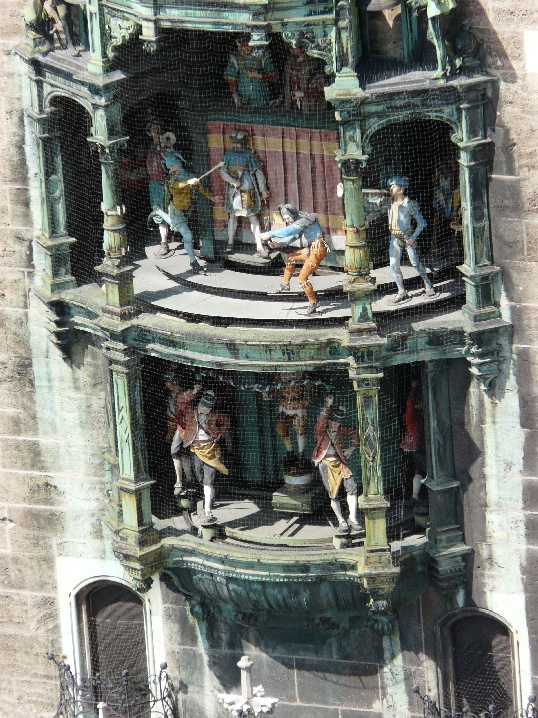 Germans love sunlight. It is often gray and cold in the long winter, so when the sun does actually come out you can’t keep the population inside. We were there on a sunny day in late May and tons of people were out enjoying the sun around a fountain in front of the Rathaus. It is so nice to see spaces in the center of big cities where there are no cars and people feel interested to come out and just be. 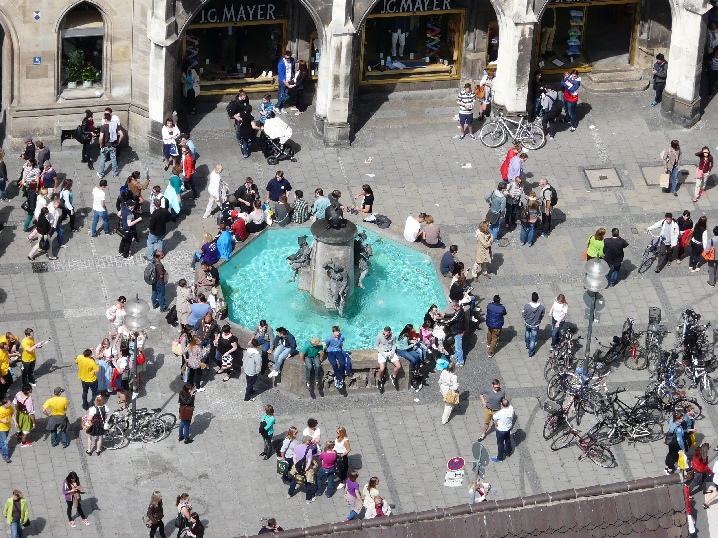 Peterschurch is not the only church in the center of Munich, not by a long shot. Not the biggest either. That honor belongs to the Frauenkirche, here with scaffolding on one of the towers. 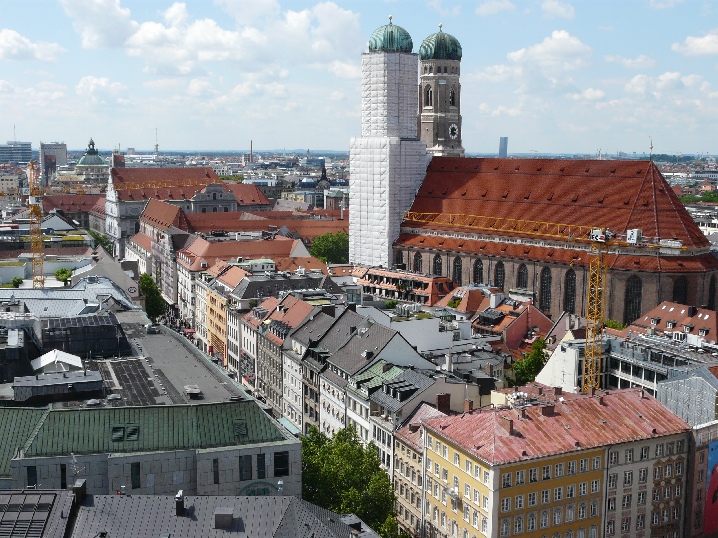 Beer in the Distance

Another bit of zooming after some helpful pointing by a local and I got this shot of the Paulaner brewery. It is quite a ways from the center. Beer is a big part of Bavaria and one of the biggest draws for Munich. It shows when walking around and it is nice to see it from above as well. 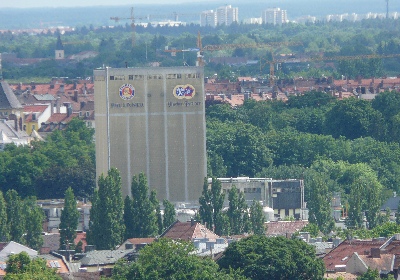 The church has a long history of survival. It has been destroyed and rebuilt several times over the year. Fire is the most common cause, which makes the placement of the no smoking sign below quite appropriate. 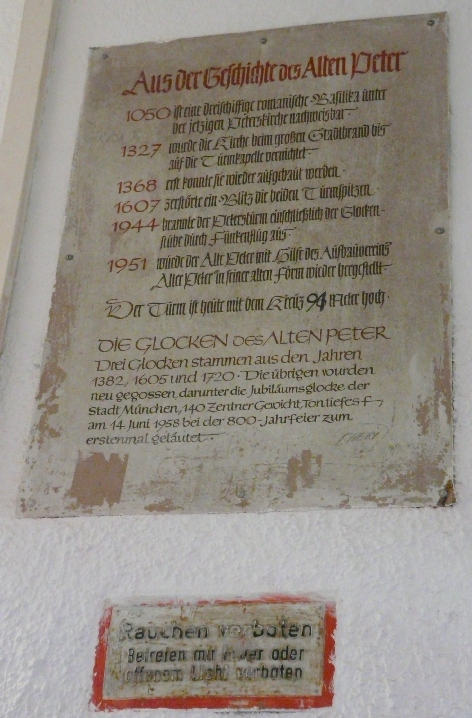 Check out more of the from-above series.