I love German cities, how the touristy bits are often right around from the markets. Oh and I love markets. So when we wandered into the Viktualienmarkt in Munich, I was happy to explore. It is a big place and has a number of sections, though the rough categories fall into meat, fresh foods and beer.

It really is right downtown too. If you have seen the Rathaus, you are only a few steps around the corner to the market. And if it looks somehow too touristy for you to bother, think again. This is a real place with plenty of locals. 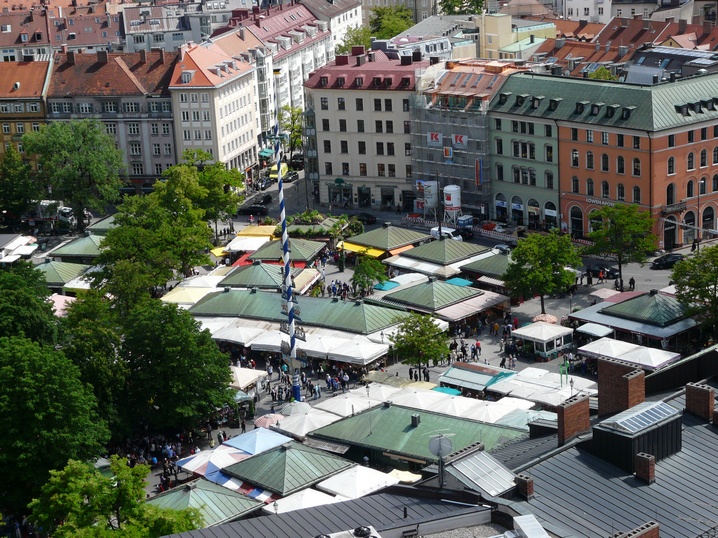 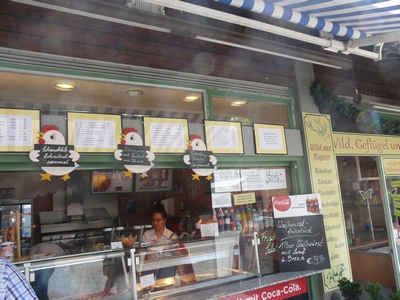 So the first section of the market is a group of buildings that have fresh meat and cheese. The great part is that they most also have street food windows like in Brussels. Wait in line under the brightly colored awning and buy some fresh meat for lunch. We started our day in the market here at a stand that sold only Turkey based meats. Everything from sausage to gyros as turkey. Other stands definitely had pork, beef and even wild game. It isn’t expensive either. Ali and I spent 12 euros for lunch for two with fries and a drink each. 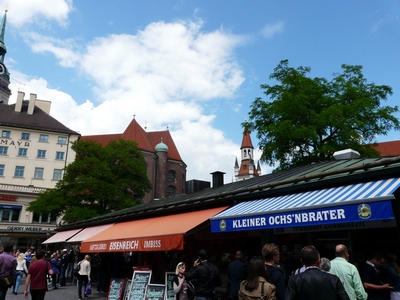 Tables are of the standing variety in most places, except for the one little section in front of a stand claiming to be Munich’s smallest bar. Walking by I started to get the sense that this was not just a place for tourists. We saw a couple of fellows in their full Bavarian garb including foot long sprays of feathers on their hats. These were no tourists.

In addition to all of the street outlets, most places had plenty of fresh meat and cheese offerings for you to do your weekly shopping as well. This was of course the original purpose of the place.

Just avoid the fast-food Nordsee outlet that has crept in the back. There are too many fresh alternatives.

Fresh Foods from Near and Far

The center of the market is the bier garden (we’ll come back to that.) Beyond that are more stands selling all manner of fresh and imported foods. I saw mounds of the white Asparagus that the Germans all go gaga for in season. There were stands for the everyday fruit and vegetables. And then there was a stand for chilis from around the world, another of spices and yet another of Hungarian specialties. Add a place for fresh flowers and an Italian making sandwiches with slices of imported salami and that is the back part of the market.

Although a few of the stalls were closed (I wasn’t sure if it was time of day or time of year), but most were open well into the afternoon. 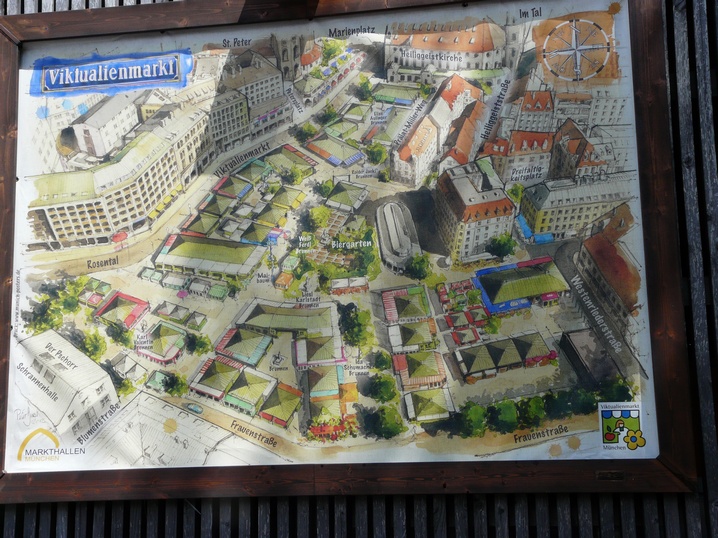 So, back to the beer. The center of the market is anchored by a biergarten. A most unusual one in fact. Now most biergardens are owned by breweries. The original purpose was that trees kept underground storage vats cool. That it was a pleasant place for people as well was a side-effect. The garden in Viktuealienmarkt is owned by the City of Munich. The beer though comes from one of the six “founding” breweries in town and rotates. While we were there, the beer on tap was from the Augustiner Brewery, which I like a lot. It is cheap at 3.50 euros for a half liter. This is about as cheap as beer gets outside of a grocery store. 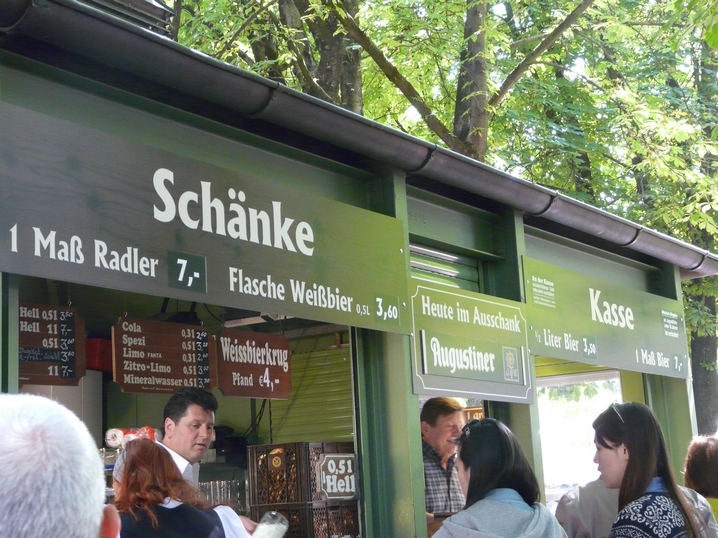 In the center of the beer garden is the green shack that sells the beer. Do not be put off by a long line. I looked back and figured I would be standing for ten minutes or so. Nope, they are like machines. Two guys pull pints and liter Mass of the most popular (the Pils) and there is a guy taking money and giving out the less popular drinks (like the bottles of dark beer). It was a German efficient solution to the problem of getting beer to the thirsty crowds. On the day we were there, there wasn’t even any deposits on the normal glasses. Pick up from a large stack of clean ones and a guy walking around picks up your empties. 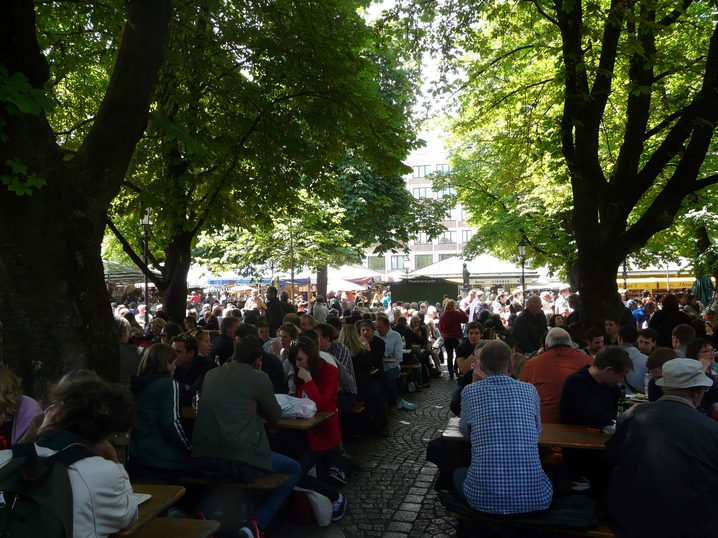 Do be aware that there are two sections to the beer garden. There are the long tables without table clothes. These are self-service tables. You get your own beer. There is a small section of table-clothed tables that were served by waitresses. 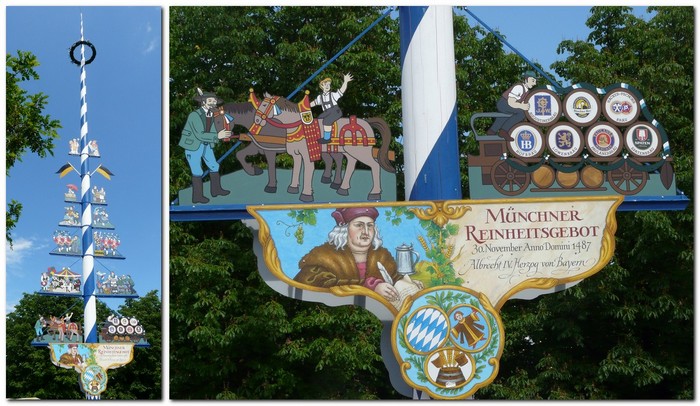 The center of the market is the Maypole which seems to tell the Story of Beer. The bottom cites the Reinheitsgebot date (note that it is 5 years before Columbus left for the New World) and the kegs on the wagon have the symbols of the six breweries that feed the garden.

We sat for the whole afternoon enjoying the sun and the dark beer. Especially on a sunny day, expect it to be crowded, but don’t despair. It is perfectly normal to share tables with others. Just look for a few open spots and ask if they are free.

The Viktualienmarkt is a great place to spend a sunny day in Munich. Yes, there are touristy things to see, but this is part of travel too. If you’re in Munich for a few days, check out Ali’s post on more neat things to do in Munich.

Climbing Freiburg Cathedral : Freiburg from Above Munich From Above : Climbing the Peters Tower