I like looking at cities from above. There is always a high spot to survey the land, either a tower or hill. In Freiburg, although there is castle hill with a wonderful view, there is also the tower of the Cathedral. 265 steps brings you to the top of the single red sandstone tower with a 360 view of the small old town of the Black Forest city. It costs a few euro, which you don’t get asked for until you are already near the top, but well worth a climb. So many of the sights that makes Freiburg unique are visible from up top.

Freiburg was once a walled city and several of the medieval gates still remain. Martinstor is the most iconic of these. The green spikes that adorn its top were added in Victorian times. The alley behind it houses one of Freiburg’s oldest breweries Martinsbraeu and the tower itself is home to a McDonalds. 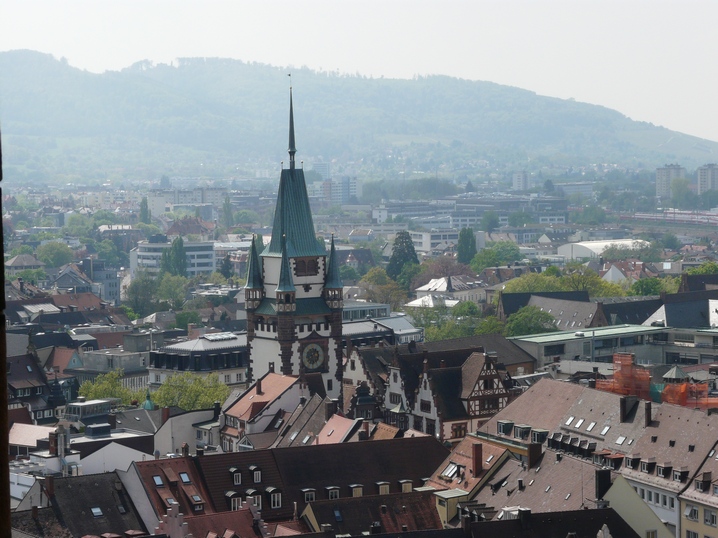 Freiburg is in southern Baden, the region in Germany that borders France. Schwabia (Schwabenland in German) is away over the forest to the west. So the Schwabentor would be the gate you would take to go toward Schwabia and another of the surviving city gates. The stairs to get up to the castle hill (that green part extending to the left) are at this gate. 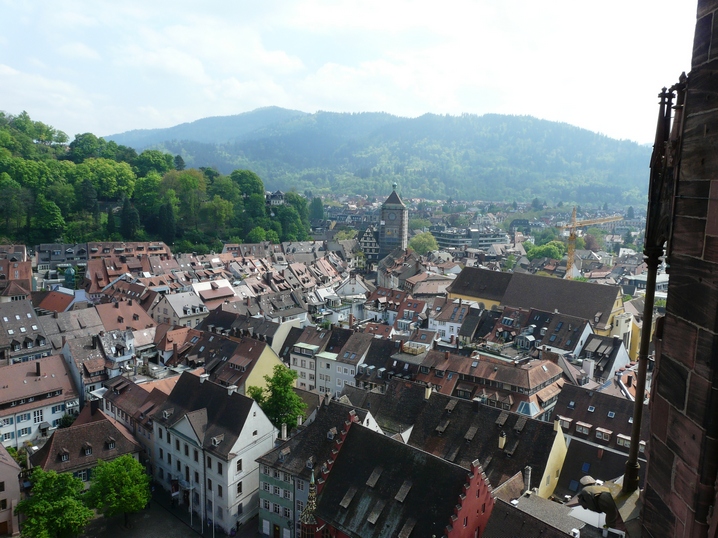 The original purpose of Freiburg was to support the castle which perched on this hill. Every lord needs peasants and workers, and they need places to live. So the town clung to the base of this hill at the end of a pass into the forest. There is no castle remaining on the hill as it was strategic enough to be destroyed on multiple occasions. The name Schlossberg (castle hill) remains though. The hill itself is a spur of the Black Forest jutting right into the center of town. 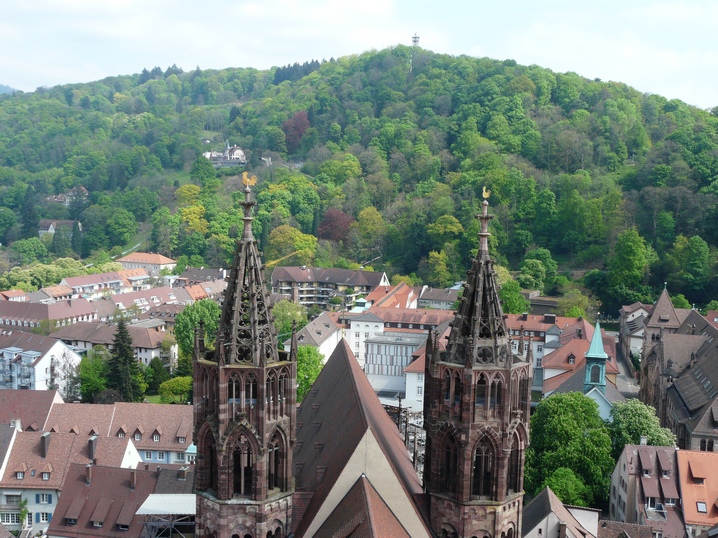 At the bottom of the picture with the green dome is the New City Hall building. Several of the blocky buildings to the left hold the university, which is one of the oldest in Germany and has a renowned forestry department (see on the edge of the Black Forest there are a lot of trees). The tall blue tower is attached to the train station. Freiburg is quite a green place and also a center for solar technology. That building (according to a sign I read once) is covered in solar panels and helps power the station below. It also has a night club on one of the higher floors (no clue if the night club is powered by solar power). 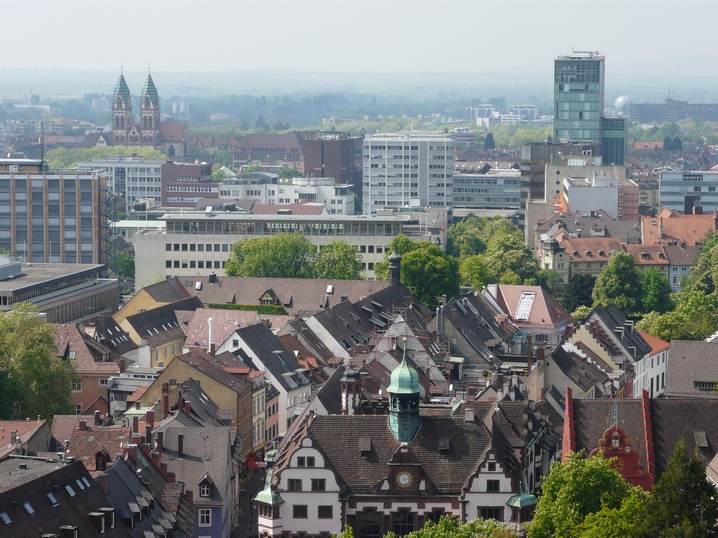 The Bächle are small gutters that run with water. They were once used a fire hydrants in medieval Freiburg, but now serve as intriguing sights and walking hazards in the center of town. 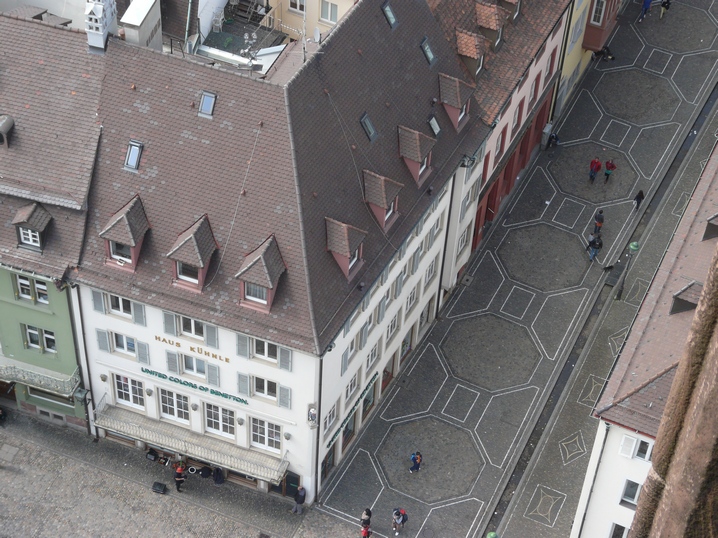 The nicely placed sign is in the area where the money taker sits. You get 209 steps up before you have to pay your 2 euros to get to the view. It is pretty good scheme as I can imagine nearly no one gets that high and just says no. Before anyone cries foul, there is a sign at the bottom telling you the price.

From this platform there are two extra stairways. One to the observation tower platform (where all these other pictures are from) and another to the bell area. Check the times when they are expected to ring. It can be very loud in the enclosed area when multi-ton bells begin to ring.

The Freiburg Cathedral tower is then 116 meters tall and there are 265 steps to the observation platform. 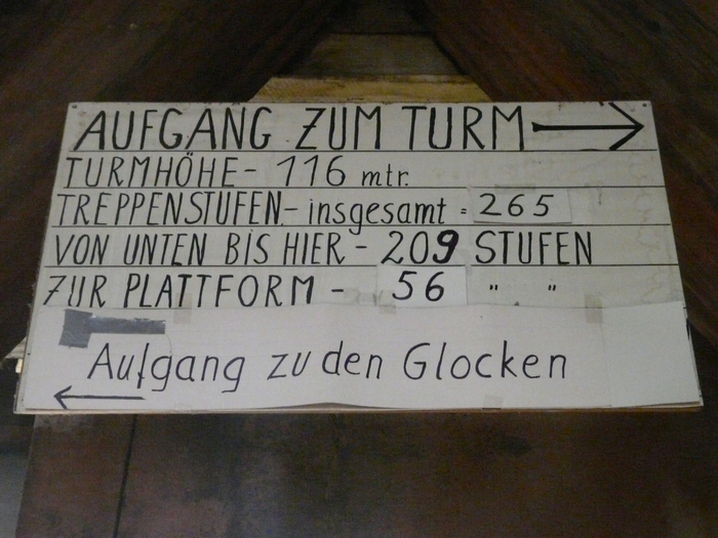 The stairs up to the top wind around in a spiral, but you occasionally get a view to the square below. As I said in the intro, this view from above highlights a lot of the great Freiburg things. Enjoying the sun in a cafe or just strolling is definitely a Freiburg thing. 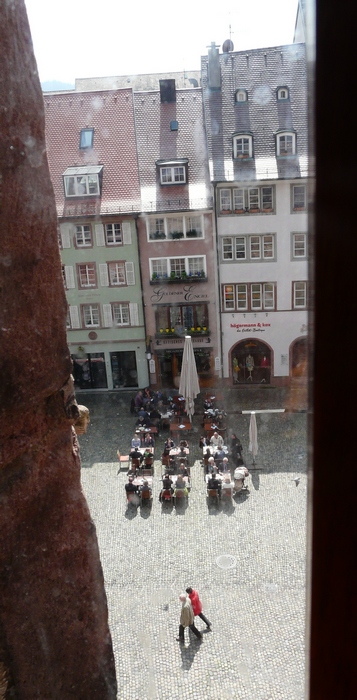 Brain Dump : Groceries in Germany A Day in Munich’s Viktualienmarkt