Food is one of those central things to life. It is pretty low on the hierarchy of needs. We gotta eat. Sometimes though, this oh so basic thing can get really confusing and complicated when it comes to living in another country, even one as modern as Germany.

So here is pretty much everything I can think of about buying groceries in Germany. Grocery stores are more or less the same, but there are a few differences to be aware of. 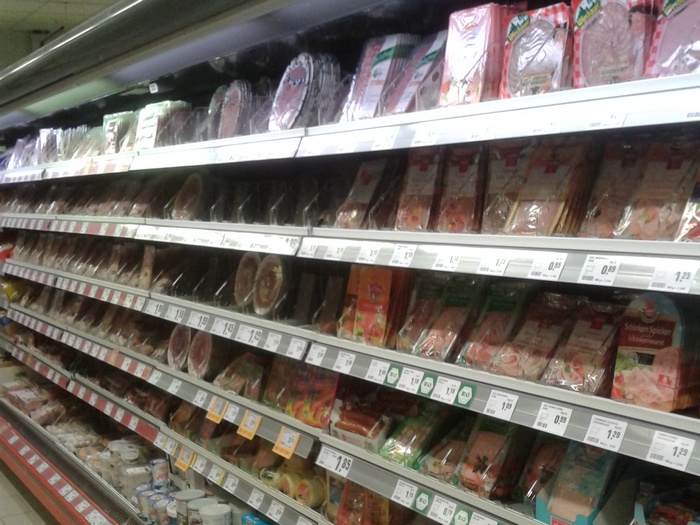 If you come from the US, almost every grocery store here will feel small at first, some ridiculously so. There is just not as much space here as in the US, so things are more compact. The width of the selection is usually pretty much the same, just not the depth. This means pretty much every type of food you can imagine is available, just not 18 types/flavors/sizes like at home.

This is going to vary by region, but I have seen most of these in most regions. If you live somewhere in Germany and know another fairly big chain in your area, let me know and I’ll add it.

Beyond the big chain stores, definitely hunt out other options. Smaller stores definitely exist. Especially in the bigger cities look for the Turkish and other ethnic stores. They often import some really good stuff and have low prices. Ali did all of the produce shopping at the great Turkish place around the corner in Berlin. In Freiburg, we do a monthly trek to the Asian shop for goodies.

Aldi – Cheap of the cheap. Speed of the attendants is more valued than speed.  The selection of the basics is decent, but don’t expect any brand you have heard of. A lot of things are in bulk here. There is also a ever changing section of non-food items. Pretty much anything you could imagine, but usually only for a week at a time. Yet Cheap.

Real – Sort of German Walmart with a large grocery section.

Rewe – Usually the larger stores. Decent enough selection.
Their “generic” brand is called “JA!”. It is a white packaging and has a ton of different selection. I actually quite like the JA! chocolate and at 39cents a bar, you can’t really beat it.

Edeka – Usually smaller stores in more out of the way places. I find that Edeka often has a better selection of beer than Rewe.
Their “generic” is called “Gut und Gunstig” (Good and Affordable.)

Alnatura – More Bio and health-food style store. I don’t shop here at all, so I know very little about it.

Pfand is the German word for deposit. It rears its head in a lot of ways in Germany society, but two in specific for grocery stories.

Carts are common enough in German grocery stores. I find them a bit odd where all four wheels rotate, but it gives you more flexibility in smaller stores. They are however all chained together at the front of a store usually. To get your cart you have to put a euro coin (or similarly shaped object) into the lead one to release it. This “traps” your coin until you return the cart.

I have seen small plastic coins for this purpose, so you don’t get caught without a euro if you need a cart. Baskets are common enough and do not require a pfand that I have seen as an alternative.

Bottles almost all have deposits on them. The prices vary by region I think, but here are our local prices to give you an idea. The hard plastic ones (like a coke bottle) are usually 15cents. A beer bottle is either 8cents or 15cents. Thinner plastic things and cans with he specific marker on them are all 25cents.

As you buy bottles in bakeries and such you will pay Pfand. That price is just added to what you pay them. I have had real poor luck getting my deposit back from those kind of places. Grocery stores all have machines for them though. So collect them and take them in.

Some places have two machines, one for the reusable bottles (hard plastic or glass) and one for the crushed ones (cans or thin plastic with the specific mark). Other places just take it all in one machine. just keep adding your bottles to the machine one at a time. When you are done, there will be a button to get your receipt. Take the receipt to the cashier when you buy your groceries and you get credit for your deposit.

Bags are not handed out like water here. You have to bring or buy them. Plastic ones are usually 10-20cents a piece. Cloth ones are available at some places and usually cost you 50cents to a euro. I find the cloth ones much better deal and some of mine have lasted 7 years since I moved to Germany. You just have to remember to have them with you or you are buying more.

If you do want to buy a bag, they are usually in stacks under the conveyor belt. Just pull one out and place it on top of your stuff. The attendant will usually scan them first for you. Oh yeah, you bag your own stuff here. Never seen a single bag-boy here.

In some markets you have to weigh your own fruit and vegetables. Look for this. If you see a weigh machine with a bunch of buttons out in the midst of the produce section, you probably need to weigh your own. Check the number on the tag for your produce and punch it in, or look for the picture on the machine. Weigh the fruit and attach the printed ticket to your produce.

If you don’t do this, the angry checkout person may send you back or will just huffy-like go weigh it themselves. You will get a talking to in any case. This isn’t in every market, but is common in a lot of smaller places.

Often stores will have a butcher in the store. They will be the one sitting on the other side of the counter from a vast array of ham and sausage to cut for you. If you need more than you see, you will need to hunt out a full fledged Metzgerei (Butcher) for more specialized stuff.

Every grocery store has a baker in some form as well. It is usually another company that has a bakery outlet in the front “lobby” of the store. Bread is serious business in Germany. You will pay them for your bread just like any other independent baker, they just happen to be in the grocery store.

You can buy all types of alcohol in German grocery stores: beer, wine, liquor. Beer is often displayed in stacked crates. Buying individuals from the crates is perfectly normal. Though feel free to pick up an entire crate as well.There will be an additional deposit for the crate itself, but there is a machine for that too.

Hamburg from above Climbing Freiburg Cathedral : Freiburg from Above