The Reichstag Building in Berlin is the seat of the German Parliamentary group and one of the more recognizable buildings in the city. It is right around the corner from the Brandenburger Tor and once sat just barely on the western side of the dividing wall. An old facade conceals a modern center. The building is crowned with a great glass dome that the public is allowed to climb, which is one of the most interesting things to do in Berlin. 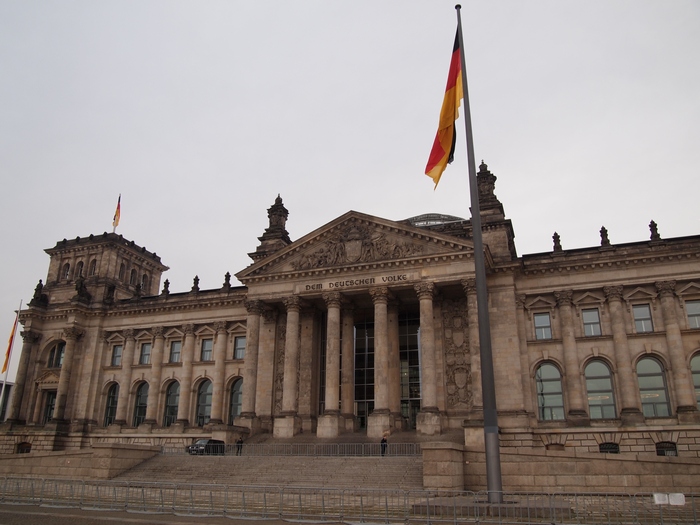 Berlin has been the capitol of some Germanic entity for a long time. It was the capitol of Prussia before Germany became a country. It was a center of Germany before the second World War and then again after reunification. So it makes sense that much of the architecture is based around government. The building is called the Reichstag, but the group of men and women that meet there are the Bundestag, as the “Reich” (Empire) has dissolved giving way to the current “Bundes” (federal) system. 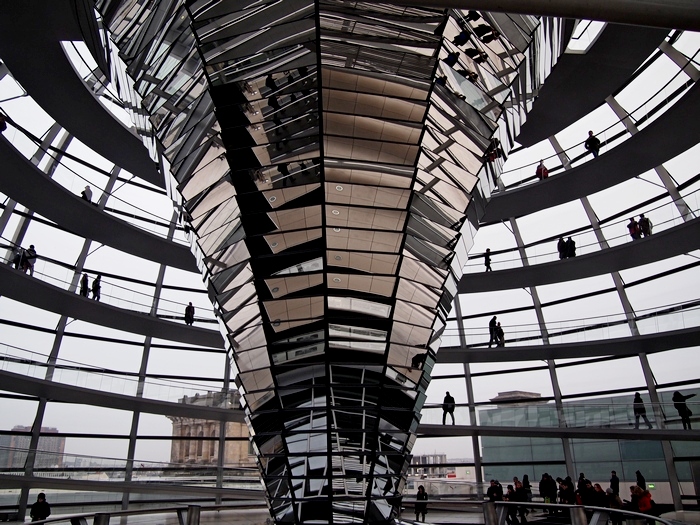 A spiral walkway winds up around the inside of the dome toward the top. The free audio tour plays as you walk along pointing out buildings out in the city as you rise above it along with some history nuggets. The top is an open space with a similar spiral exit ramp. A sign mentioned the audio tour was 20 minutes, but we were up there for much longer than that.

The roof beyond the dome is flat and you can walk around taking pictures of the city as well. There is also a restaurant up top, but we didn’t go near it, so I have no clue what kind of food it had. Being on top of the building is certainly a decent vantage point from above on Berlin, but not quite as high or central as the Fernsehturm in Alexanderplatz. 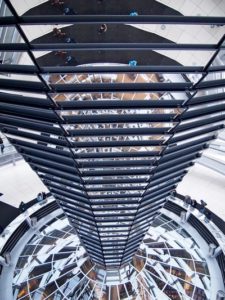 The large glass dome which crowns the building is both a form and a function. I thought this was pretty awesome and so completely German.

The glass dome has a mirrored spike that stabs down in the center. This pierces the roof of the building into the plenary chamber of the Bundestag. The glass and mirrors direct daylight down into the room to reduce lighting expense. A rotating shade dims the direct sunlight to prevent glare.

Germans love fresh air. The top of the spike is also open allowing fresh air into the below chamber. The audio tour mentioned that a sloping drainage system keeps rain and snow from dripping onto the politicians below. Although it was gray out, we didn’t see that particular feature in operation. 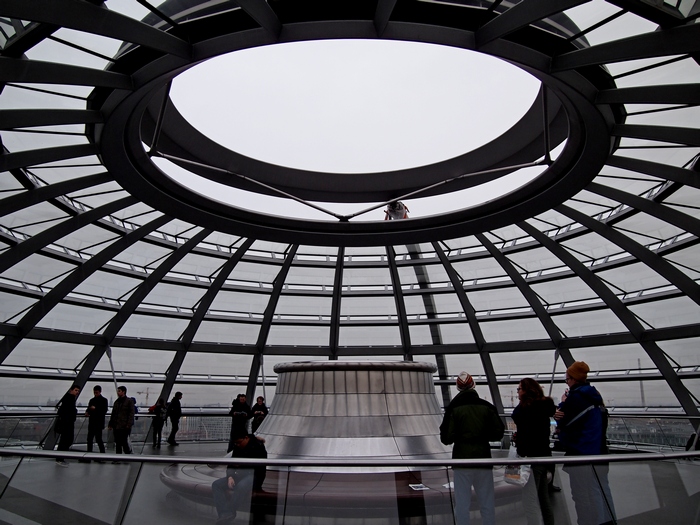 There are a lot of people that want to visit the dome. In order to get the free tickets, you need to apply ahead of time on the website, giving the names and birthdates of everyone in your group as well as picking an entrance time. It was pretty painless. We picked our time and showed up a few minutes ahead of it.

Passports are checked against the list of names and birthdays and you go through a security scan. Then you are escorted into the building and allowed up the elevator. The tickets are free and once on top, there is no time limit. The dome is covered but not sealed, so bring a coat if it is cold and windy.

Brain Dump : Health Insurance in Germany Five Ways I Deal with a Fear of Flight