European summers are well known for wine festivals and partaking in local parties is one of the joys of travel. Winter (at least up until Christmas) is the time for Christmas Markets. This is especially true in Germany, though they are extending across Europe. For those that have not had the chance, here is a guide to experiencing one, using pictures and examples from our visit to the Frankfurt Christmas Market.

What is a Christmas Market?

First off, what is a Christmas Market? It is a traditional type of market that sets up in the main square of pretty much every German city from the tiniest village to the largest city. They are usually timed according to Advent, the four Sunday’s leading up to Christmas. The exact start dates vary by local decision, but the last weeks of November is normal. This is nice as it coincides with the American Thanksgiving, helping reduce that feeling of missing out.

The markets almost all end by the 24th of December. In the smallest villages, it may only open a few days a week, though a city of any size will be open 7 days a week. 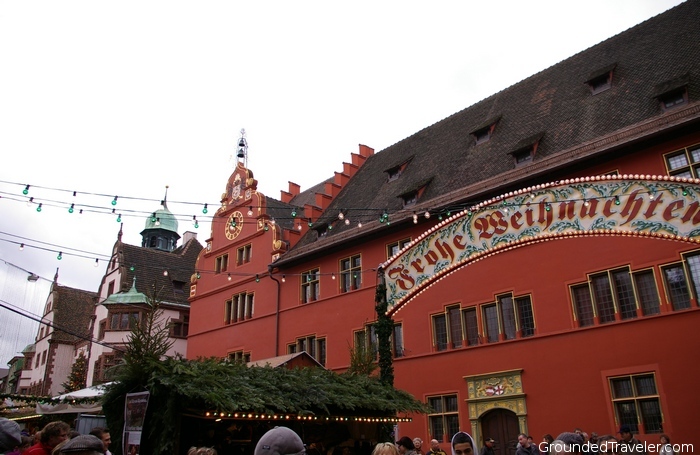 Stalls will fill several squares and side streets of the center of town. In Frankfurt, this meant several very large squares and side areas covered in stalls. Stalls range from furry clothing to jewelery to candles and other trinkets. Often whatever the local specialty of the region will be highly represented. That is fairly true in Freiburg, but in Frankfurt I saw a lot of German regions represented. However most of the stalls are food or drink. Remember how I said having markets start the end of November made the lack of Thanksgiving less of a problem? Yeah, Christmas markets are all about food.

They are also about crowds. This is definitely not just a tourist thing. Locals with families will come out in droves to enjoy the once a year Christmas Markets. There are plenty of things to occupy children, so do not be surprised to have to deal with baby carriages in the crowds too. Try to be ok with the idea that it will be crowded, especially if you are there on a weekend or during the evening. Bring your patience and whatever crowd moving skills you might have from night clubs.

In addition to the stalls, often the larger markets will have rides. Frankfurt had several carrousels and Freiburg has a small Ferris wheel. Christmas decorations from a nativity scene to enormous Christmas trees to every rendition of St.Nicolas and Santa imaginable appear in the market too.

Like much of Germany, expect to use cash. Although some of the higher price gift stalls may take cards, nearly no food or wine stall will. 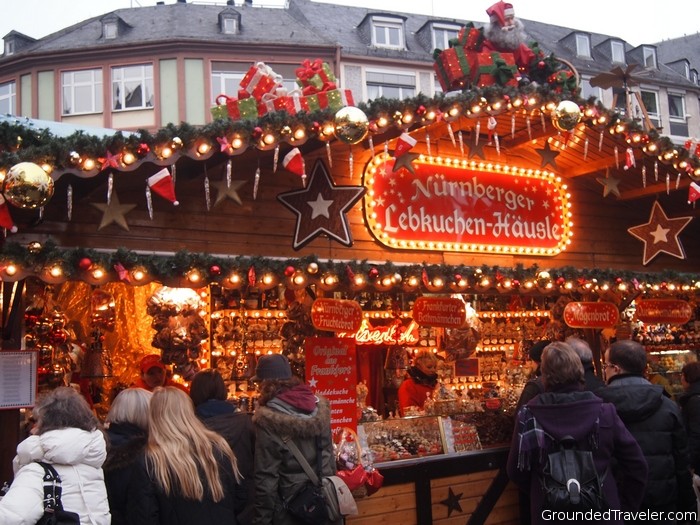 Nighttime is when the markets really get going. Though remember that Germany gets dark early this time of year, so full dark is as early as 5pm. Frankfurt market is open until 9pm, but check the schedule for your chosen market. A few of the wine stalls may be open a little later for the latest round of deposits, but it is not an all night kind of market.

Weather at this time of year can be pretty cold and wet, but don’t let that stop you. Although snow is common and can make the market look really pretty, it is also pretty cold. When that snow turns to rain, it can be a bit of a slog. Definitely have an umbrella on hand, but try to avoid using it in the crowd as it can get dangerous. Bundle up against the cold with a hat and scarf.

Most of the wine and some of the food stalls have large umbrellas or a covered section to enjoy your drinks and eats. It doesn’t really block the wind, but can help keep the cold off.

A word about “Pfand” 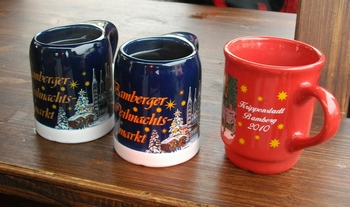 Pfand is the German concept of deposit. Here, they give you real glasses, mugs, plates and silverware. (Apparently in Freiburg it is even required by law to not use paper.) You pay an extra few euros when you buy your food as a deposit on the dishes. When you return them, you can get your money back. Sometimes you will get a little plastic marker or cardboard chit as well. Save these as some stalls want to make sure you got the dishes from them before they will give back the deposit.

This is a standard practice at German festivals and open air biergartens. However at Christmas Markets there are some specialties. Glühwein comes in small 0,2L mugs that have designs from the year and town of the market. Firstly, it is common enough to get a mug from one stall and just go wandering to return the standard mugs to a different stall. Second, there are enough people that just don’t return the mugs for the deposit and collect them. I have a small group in my kitchen from various years.

Some stalls will have a specific place to give back deposits if you are not buying more. Look to see if there is a side spot perhaps labeled “Ruckgabe” (Return).

As mentioned, the market is really heavily into food and drink. Don’t expect much if any of this stuff to be healthy.

Germany is very regional, so while these are the broad categories, the specifics are going to vary by region. The smaller towns may only have the regional stuff, while the bigger cities like Frankfurt will have a sampling from around the country. 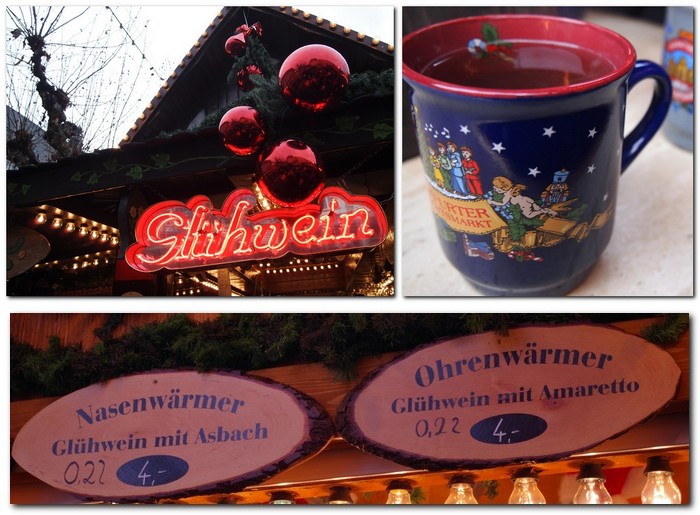 This is the German word for “mulled wine” and THE Christmas Market drink. It is served in small mugs steaming hot. The most common is a red wine with spices. White wine is common as are all kinds of various other fruit based wines.

Frankfurt is known for Applewine anyway, so it makes sense for it to be heated up for Christmas Markets. This is actually one of my favorite mulled wines yet.

Beyond just the simple wine, it is quite common to see Glühwein in combination with shots of various alcohols. Either listed as “mit Schuss” (with a shot) or as creative names like “Nosewarmer” or “Hot Frenchman”.

A mug of wine will cost you 2-3Euros with another 2-3Euro deposit for the mug. Expect a few extra Euro if you have a shot in it.

Remarkably you don’t find much beer at Christmas markets. It is certainly present, but Gluhwein is the drink of the season.

It means Fire Tongs Bowl. Basically normal Glühwein is in a vat. Above the vat is a metal trough filled with sugar and burning rum is poured over the sugar to drain into the wine below. It is amazing to watch being made. You can even buy single cup “tongs” to make one cup with a sugar cube.

Certainly alcohol is in most drinks, but there are a few non alcoholic options. Look for Kinderpunsch (childrens punsch). Most Glühwein stands should have it. I have never had it, but it looks just like the Glühwein and just as hot, so I imagine it is mulled grape juice. 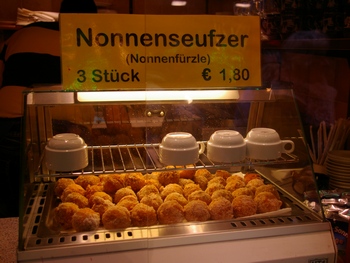 This is a big category. The Christmas Market is a lot like a fairground back in the US. Expect anything that can be fried to be fried. Sweet and savory and any form of potato known to man. The Freiburg specialty is Nonnenseufzer which are small fried balls of dough sometimes with applesauce inside.

Kartoffelpuffer (potato pancakes) are common and served with either applesauce or garlic sauce. Donuts and fried dough creations are normal enough too.

This being Germany, the humble sausage is everywhere. Yup, not much more to say than that. The many and varied types of sausage available anywhere you turn. We definitely make a few meals at the Christmas Market during the season.

One thing that I usually only see at Christmas Markets are Kasewurst (Cheese Sausage). These are Bratwurst with bits of cheese inside. I have seen them in the grocery store too, but I only ever see them being sold at the markets.

Crepes and waffles might look familiar to the tourist palette, but there is much more. Stands offer just about any fruit dipped in chocolate. We even saw chocolate covered chilis (yes, fairly hot, but still not a great combination). Other stands had cookie hearts that you can wear and still others offered hard candies in all the flavors of the rainbow.

My favorite sweet site from the Frankfurt market was the one stand selling giant pretzels. I am fascinated that pretzels are primarily a southern German thing, so this stand intrigued me. He had a stack of 18inch pretzels dipped in chocolate (both milk and white varieties). 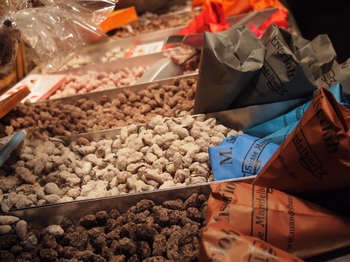 You know the song about “roasting chestnuts on an open fire”. Yeah, the Germans actually do that. They are called Marronnen in German and very common in the winter even outside the markets.

You can find them by smell usually. The warm nutty aroma wafts with a warmth from big metal drums. The nuts are sold in paper bags which are as welcome for the warmth as the nuts. Chestnuts are bigger than I expected and they open slightly when roasted.

Candied nuts, especially almonds, are another very common sight at the markets.

Ask any questions that I haven’t covered in the comments and I will try to answer. We will be in Berlin for Christmas Market season this year, so I will have another region to explore and compare as well.

German is an exacting Language German Efficiency is an Illusion