Tourists change places. When a city becomes a tourist destination, it seems to change. The more tourists that want to come through, the more pronounced that change seems to be.

We had been spending most of the week in tiny Minori on the Amalfi Coast, which while touristed was not a major destination. We knew we wanted to see the famous towns of Amalfi and Positano too, so we spent a day going to see them. It was almost a different world only 15 minutes away.

What follows is a bit of a rant. If you just want to see the pretty parts, check out the picture post. 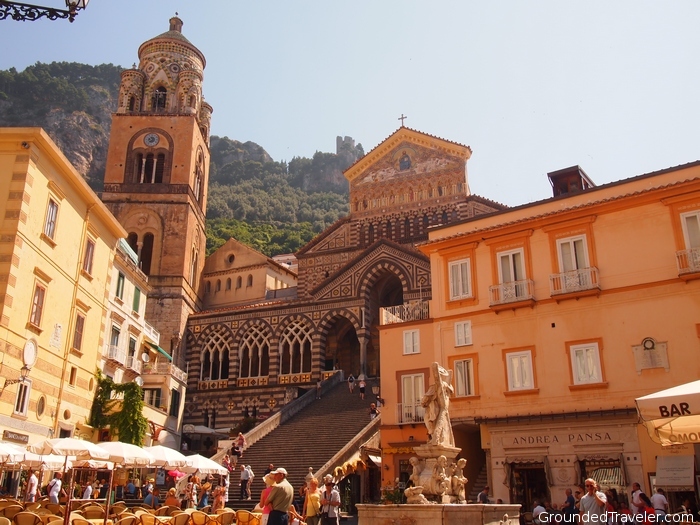 Amalfi doesn’t look like it now, but at one point it was one of the four most powerful cities in Italy. As one of the four Maritime Republics (of which you see the emblem for everywhere) a vast swath of seas was controlled from this little town. This aspect of history feels hidden to an extent though.

The big nod to history though is the large Cathedral off of the main square. It is up a ton of stairs, so has a great view too. We decided to go through it for as much to escape heat as any real expectation of it. The cool part was that it was made up of a number of different chambers at different levels due to the steep hillside it was built upon.

We did find a few plaques mentioning more history, but not much. I had (naively perhaps) expected to see a book on the history in a shop. Despite being really into reading on my Kindle, I would have happily bought and carried a book which talked about Amalfi at its maritime power height.  No luck, only guidebooks. I might have to hunt the Net for something.

There is apparently a history museum. I honestly don’t remember why we didn’t go. I have pictures of a sign that mentions it, but I really may have just took the picture thinking to read it later. Ugh, going to fast myself sometimes.Or if we were just so tired from the crowds that we decided to skip it. 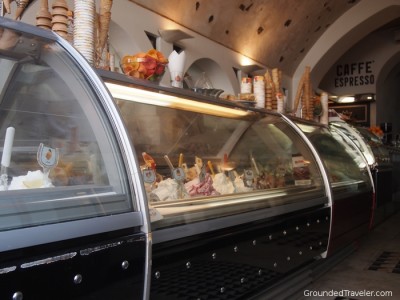 It had gotten hot so we decided to get a gelato. We wandered up the street a bit and walked into a decent looking shop. The man was calling “cup or cone” at everyone waving one of each. We both picked cup and proceeded to pick a few flavors to go into it. Two flavors is normal for a small cup, so we didn’t think about it, until it was 10 Euros for two cups. I was stunned and yet still paid. I don’t deal with conflict well and yet I finally asked. He pointed at the cup, “large cup 5Euros”.

I finally found the tiny hand written menu with the price, so I didn’t argue further. We had not been asked for the size of cup we wanted like every other store we had been in in Italy. It really felt like he was taking advantage of tourists. Especially those who don’t know normal practice in the country. The gelato was passable, but not wonderful. I seriously didn’t need so much either, being used to the Piccolo size elsewhere.

Looking back into the shop there are stacks of cups, but all in one size. We didn’t even see a stack of smaller cups as is to be expected, despite there being a price for small on the tiny menu. I don’t begrudge people trying to make an honest living, but I do get riled up if I feel like I am being taken advantage of.

Positano is a bit like the travel version of hanging out with a movie star. It is famous because it is very pretty and in a ton of movies (including some of my favorites)and yet it has become commercialized. It actually reminds me a fair bit of Portofino up in Liguria. 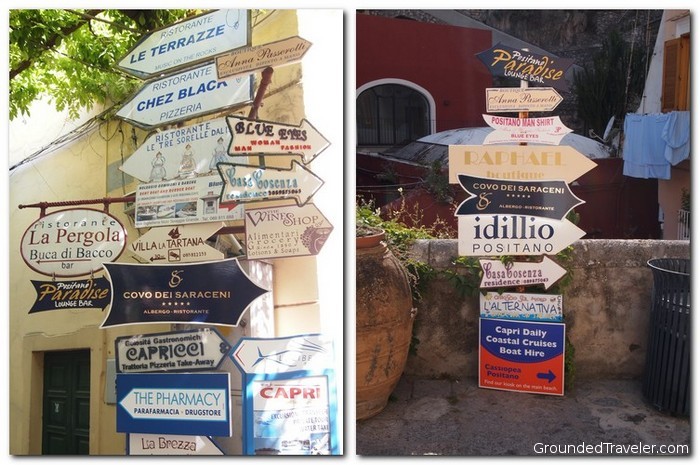 Ok, maybe it is our own fault. We went to Italy in June. This is prime tourist season. We also went to the famous named towns. I shouldn’t complain about prices if I go into a famous name brand store, so maybe I shouldn’t if we go to the big name towns. Even still, this was such a big departure from our fun little Minori.

We had planned to spend a few hours in Amalfi and a few hours in Positano wandering. We also thought about finding a place overlooking the water for dinner. I was even armed with references from twitter friends. We got to Positano about 3pm and in just an hour were so overwhelmed with the tourist shops and crowds of people that we just decided to head back. The idea of staying even a few more hours and hunting down a restaurant that didn’t feel like it was out to get us was just too much to deal with. 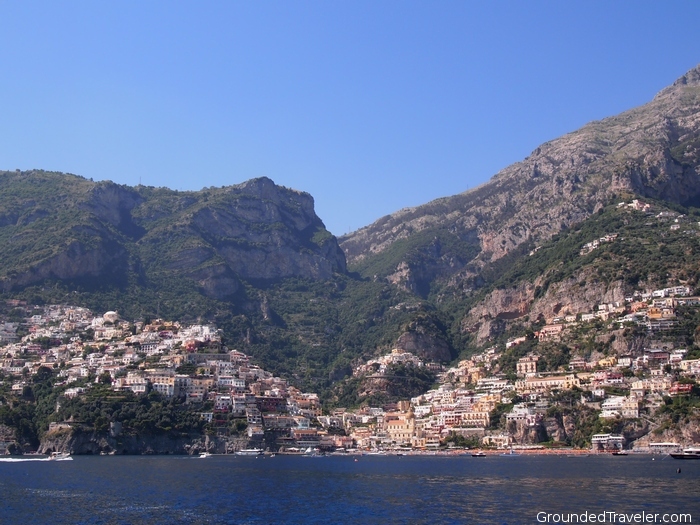 Looking for a sense of life, not stuff

I know I recently ranted about the tourist hordes in Rome as well. It may sound like I hate Italy. This is totally and utterly not true. I love traveling in Italy.I just don’t deal well with crushes of people or lines of shops peddling to those tourists. I don’t necessarily expect a town like it was in the middle ages. I do want to be in a place that feels more like a place to live and less like a theme park.

I loved the Amalfi Coast and the boat trip to Positano was beautiful, but I just couldn’t deal with the “destination resort” that the towns seem to be.

6 Things that make a place good for slow travelers Minori : the most amazing sleepy resort town