Ali wrote about how to separate garbage in Germany a while back. This is the next story in the line. When you have things too big to throw in the black or other classes of things that are specially designated, then there is Sperrmüll.

At least in Freiburg, you get 4cubic meters of allowance a year and have to make an appointment. Then you put your junk out on the sidewalk on a specific day and they come take it away. Ok, what is so interesting about this then?

There is a secondary trash collection industry going on. We have been cleaning the apartment and basement trying to prepare it for our trip so had a bunch of stuff to get rid of. A few weeks before we left on our summer travels was our appointment and the next morning only a few bits of our Sperrmüll were still on the sidewalk to be collected by the official truck. 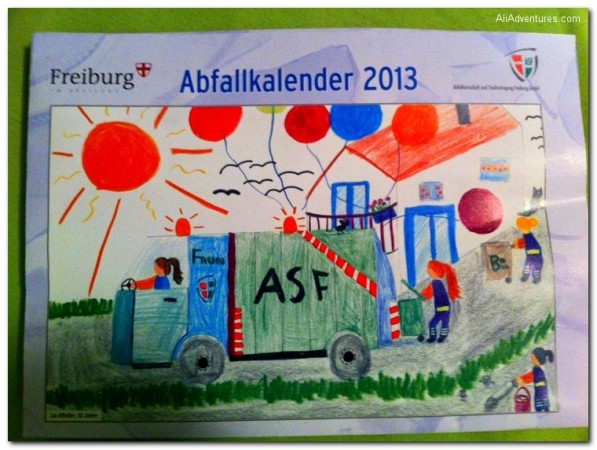 In the same magazine that Ali talks about, which comes every year from the trash department, we get two little cards. These are the tickets to the Sperrmüll. You can also sign up online, which I do, but the cards are the same. The point is to give the trash people an idea of what you are getting rid of and they then give you an appointment. They definitely read what you write as I got some of my trash declined this time (I expect due to a bad translation on my part as they took everything).

Appointments are sent to you within 2 weeks and can be anywhere between 3 and 6 weeks out. Yet again, German planning strikes and affects the society. Efficiency comes in at a different point of this story, not here at the appointment level. If you have poorly planned, or are just particularly impatient, you can check a box for a “rush appointment”. These can be only 2-3 weeks out instead of longer, so still no next day service. You do pay for the privilege though. The normal appointments are free (up to 2 a year).

On the day of your appointment, long awaited, you pile your stuff on the sidewalk and they come to remove it.

One man’s Sperrmüll is another man’s treasure

We had a busy day and started piling up our stuff on the sidewalk in the evening. There were a few things from up in the apartment and the rest from down in the basement. We started in the apartment and took a load down including a small rickety shoe shelf. By the time we were down with the next load, this shelf was gone.

This is the “fun” part of Sperrmüll: the scavengers. We continued to pile our stuff on the sidewalk from the basement. Another small shelf with some cut off pieces. An old radio with broken speakers and a disused vacuum. Some carpet remnants, a mattress and some left over wood bits from a curtain system. The carpet bits were gone by the time we were done with the piling. The electronics and shelf were gone by the time we went to bed. The next morning there is only the mattress and the wood bits.

The pile had also been added to. We think someone dropped a microwave on our mattress and then it got taken away later.

It was a bit like waking up and peering out to see what Santa had taken away.

You have good Junk

Even on days that are not Sperrmüll collection, people leave little boxes of books or dishes out on the sidewalk with a sign saying “free to take” (Zum Verschenken). So there is some of this kind of thing going on anyway, but on Sperrmüll nights it is much increased. I can only imagine the scavenger groups know when and where the appointments are and do drivebys. Part of the reason the appointments can be so far out is that they get grouped into areas of town.

Some of our stuff was certainly serviceable given some work on it. The shelves just didn’t fit anymore and were cheap and unstable. The radio and DVD player and vacuum could probably be fixed too. The surprising bit to me is how efficient the collection is at this level. I remember the last time we were doing Sperrmüll how guys came by and asked me about things in my pile. A little like Go Fish for trash.

Maybe this is a sign that we bought too much. I once thought it would be nice to have a radio. I used to listen a lot in the US, but it isn’t as relaxing in German for me. I am actually happy someone else feels they can get something out of our trash. It at least won’t end up in the landfill today.

This is how it is in Freiburg. I imagine that each city has different rules for their trash as well, so check out your own local yearly magazine. (Thanks to Ali for the use of her picture. Really, how often do you take pictures of trash?)