I like to watch movies. I enjoy how they can get me to think about aspects of life. I am also a visual person, so this medium speaks to me. Even when I read books (which I love as well), I see cinematic style scenes in my head. So movies are often where I turn to for cheer myself up or encourage myself when things are getting difficult.

Waiting for all of the pieces of Beyond Vacation to fall into place (or be shoved into place with brute force) has been exhausting. I am burned out in the evenings more often than not (note less often blog postings as evidence) and just want to sit and watch something on the TV. Thankfully we have seen a few movies over the months that have inspired me to keep going and make changes. So here is my list of 5 movies to inspire you to get out of a crappy job and do something to make your dream into a reality.

Under A Tuscan Sun

Diane Lane is a newly divorced writer sent to Tuscany on a vacation by her friends. She feels that she has nowhere to go home to and buys a run down villa in the small town of Cortona. The movie then follows her and the people around her as she renovates the house. There are several stories woven through her own. She grows and heals alongside the house as it slowly is fixed up. There is a great metaphor with a faucet that is pulled through the entire movie and I love it. As a hint though,  despite sharing the name with a book, the movie has no real relation story-wise to that book.

As I was planning my move to Germany 6 years ago, this was my go to movie when I was feeling overwhelmed or scared. It is such a wonderful look at how change comes when you are least expecting it. In a lot of ways, my own move to Germany has actually paralleled the movie. I came knowing no one, eventually bought a place to get fixed up and now am married. I still like to watch the movie and there are so many quotes about just getting out of your misery and get on living and making something wonderful from it.

Stars Jim Carrey as a bored loan officer that is taken to a cult-like conference of Yes Men. He is used to saying no to everything and yet the conference and speaker convince him to start saying yes to things. Pretty much anything he is asked, he says yes to, with various results both good and bad.

I liked the idea of seeking experiences and not being closed off to things. There are so many opportunities that are frightening and strange, but wonderful. I am very guilty of avoiding such things just because they are unfamiliar, though travel helps this feeling in a lot of ways. I don’t have a choice to say no, for example to strange food if I want to eat. The sense of wonderment in travel and being outside of my normal situations helps me get over that urge to say no to things.

This was in Ali’s piles that she brought over. I had never heard of it and had no interest in watching it for a long time. Then a few months ago we popped it in and I loved it.

Will Ferrell is Harold Crick, an IRS auditor who hears a voice of someone narrating his life. Not just that, it sounds as if the narration is leading toward his imminent demise. This kicks him into breaking his routines that had become the structure of his life and go off script to try to live a life.

So much of life seems to fall into routines. Work itself IS a routine. Every morning you go to work to do the job. Even if the job is different each day, there are routines to be followed. Sometimes the routine digs me so far into a rut that I cannot see over the edge of the rut into the wider world. I get scared of the things that I used to enjoy and then even the routine is no longer comforting, but confining. Almost as if the routines are dictating my life. I liked again the idea of trying things that are out of the routine.

A bit of a cult classic, but such a wonderful look at how the IT Corporate world works in the US (yes it is quite accurate in many ways). Ron Livingston plays a bored IT worker stuck in his cubicle life with 8 bosses and a bunch of colleagues that almost seem happy in their office confinement. Comedy Central used to play this movie on Sunday nights, I feel, just to tease those of us heading back to the office on Monday. Jennifer Aniston plays the love interest that he meets after a hypnotherapist trances him into not caring about his job.

Seriously, if you haven’t seen this yet and still work in an office, go get it. Tons of lines have made it into day to day language from this movie (Ever heard of a TPS Report?). One of the aims of Beyond Vacation is making sure that work does not overwhelm life. There is a lot here about having a job that makes you happy or at least seeking enough other things in your life so that the job does not overwhelm you.

“[W]e don’t have a lot of time on this earth! We weren’t meant to spend it this way. Human beings were not meant to sit in little cubicles staring at computer screens all day, filling out useless forms and listening to eight different bosses drone on about about mission statements.”

This hit the major boxoffices, so it is probably well known to most of you. Julie Roberts plays Liz Gilbert, the writer of the well known book of the same name. A failed marriage leads her to explore herself and attempt to find life again. The story progresses from Italy (for Eat) through India (for Pray) to Bali (for Love). Each place builds on itself to lead her through the journey.

I actually brought the book of this with me when I moved to Germany. I remember sitting in Uni Cafe in Freiburg reading it before I even started working. The movie is not the same as the book, nor would I expect it to be, though it does follow the same story. I like that the core of the story revolves around love. Caring for oneself as well as loving others.

Near the end, there a bit about the “quest” that I like. That if you set out to reach something and are able to accept that everything along the way is a step getting you toward what you seek then truth will lie at the end. (Heavily paraphrased by me from this.) Travel and life often seem to align like this. The motion that is physical in travel can mirror emotional motion as well. The places are very richly used as well. We sat the other day dreaming about the Italy part of our trip with just a few panoramic shots. 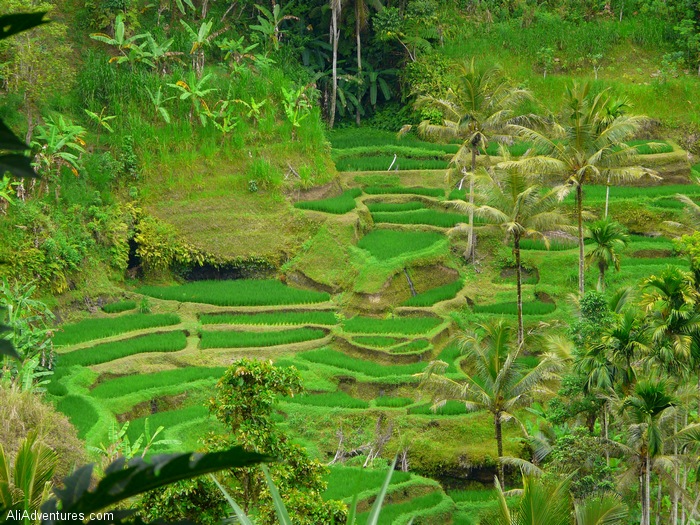 Sometimes my mind gets clouded and the daily stresses choke out rational thought. I get into the rut of just trying to keep my head above water and forget the goal. In these times, I like to use movies to kick start the thoughts again. There are probably a dozen more in my stack that have inspired me over the past years to cut through the crap that I get buried in, but this is my list of ones that are relevant to me right now.

That is the other part of movies and books that I like. Nearly every time I watch them, different bits speak to me. As my own life and situation changes, I need different inspiration to keep moving. It is awesome how even the same movies can provide that in different ways.

What movies do you watch when you need some inspiration?

(Thanks to Ali for the last picture of the rice terraces in Bali.)