I have lived and traveled in German speaking Europe for a long time. I have even been in Austria several times, but I have only recently experienced Schmarrn. I tried making it this morning and although it was edible (and still tasty), it didn’t turn out like I wanted. I will try again, if for no other reason than I like the word. 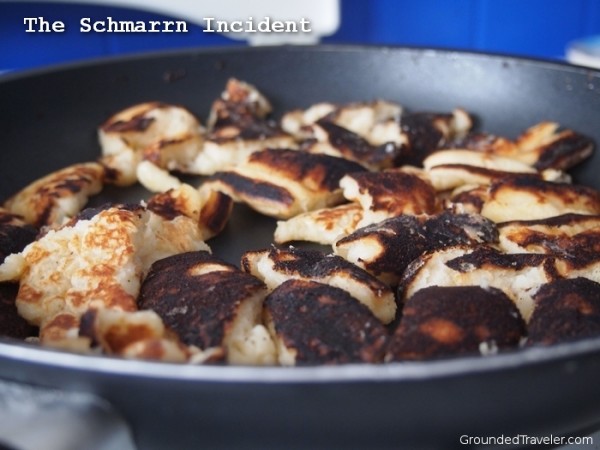 Schmarrn is pretty much pronounced like it is schpelled. The word is related to the word for “smear”(makes me think of bagels) in German and also called Kaiserschmarrn. This, according to the wiki page, comes from a story of the Austrian Emperor (Kaiser). If you can read German, check out the German wiki page with a bit more info.

The first mention I can remember of it was a night at the Augustiner brewery in Munich a few years ago. It showed up on the dessert menu there and a friend ordered it. I don’t even remember much more than the name.

Then the thought faded until just this past 6 months. I got to try it for the first time last November as dessert up at a hotel in Titisee and again in January several times in the Austrian alps.

Schmarrn are essentially big thick pancake bits pan fried and sprinkled with sugar. Pancakes are one of my favorite foods, so when I saw the package at the store the other day, I wanted to try to make it. 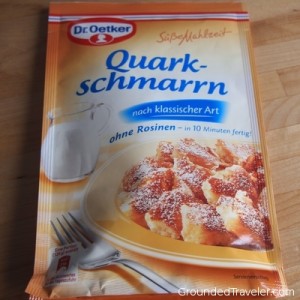 The most common translation I have seen for it is “cut-up pancakes.” And while this is certainly true, it misses the point somehow. The dough is both thicker and denser than a normal American style pancake. It is however poured into a pan and cooked there before being cutup. The pieces are then cooked again in the pan with some butter golden brown on all sides.

The traditional recipe involves raisins in the dough and a plum compote as a side. It has a lot of eggs in it and is more filling than it looks.

Common toppings seems to be powdered sugar and vanilla sauce. The place in Austria had hazelnut Schmarrn too.

My attempt at making it

Like my attempt at pancakes from a bottle, I tried to make Schmarrn from a package. I am not much of a fancy cook. I can make dinner and have occasionally made cookies from scratch (with help), but if there is a package with a gorgeous picture on the front of what goodies it makes, the American in me wants to do it that way.

The powder from the envelope gets mixed with milk and an egg until smooth then poured all at once into a buttered pan. I liked that although it made two portions, I only had one go at the pan. Pancakes needed to be done in stages. 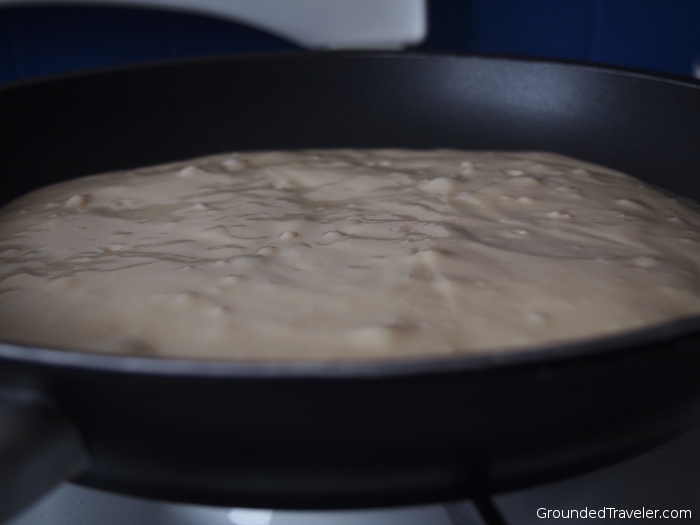 So here is where I started to go wrong. The package says middle heat, so I turned up the burned off of low. This may have been my mistake. The mixture looked pretty thick and I was worried about it cooking through. It made some sense with the higher heat.

As I started to notice the bubbles that are indications of pancake readiness that I was perfectly willing to attribute to Schmarrn-readiness, I read the next step. This step talked about two spatulas. Fine, we have plenty. Or not so fast, we own plenty. We did not have plenty clean. So I hurriedly scrubbed a spatula from last night as I began to smell the faint whiff of burning. 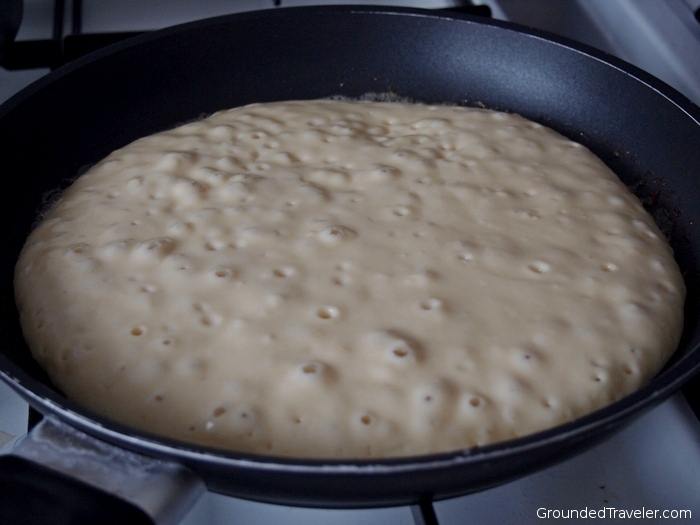 The flipping and the cutting

The next trick seems to be flipping the Schmarrn. Two spatulas is definitely a good idea. I got it flipped without dropping it on the ground, which was a feat. But the bottom had burned a bit, I discovered.

We still had to eat breakfast, so I continued. As I looked, I thought maybe it was just really dark brown, not burned. (I was wrong, it was burned, just not so deeply as I had feared.) Then I read the next step which involved cutting the Schmarrn into pieces. This I did with enthusiasm. 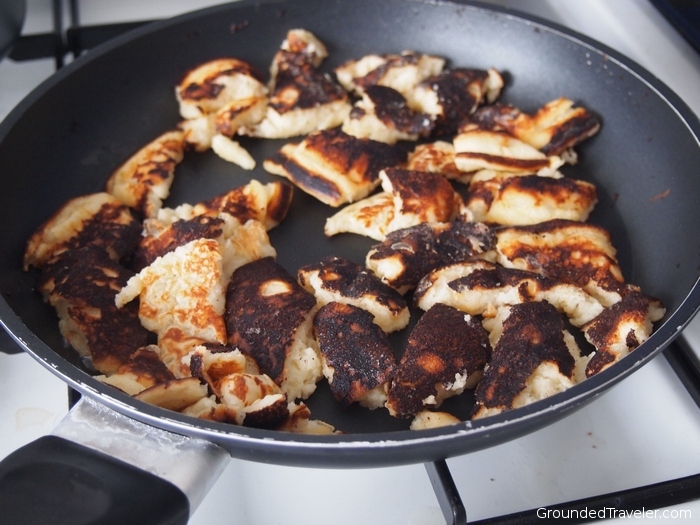 I added a little bit extra butter (all baking seems to hinge on adding enough butter) and flipped the bits about to get brown on the non-burned side. It was only after a few seconds that I realized that I probably should have let the new side cook a little bit before chopping my masterpiece to bits. Ah well..

I seem to be a better food photographer than a cook. 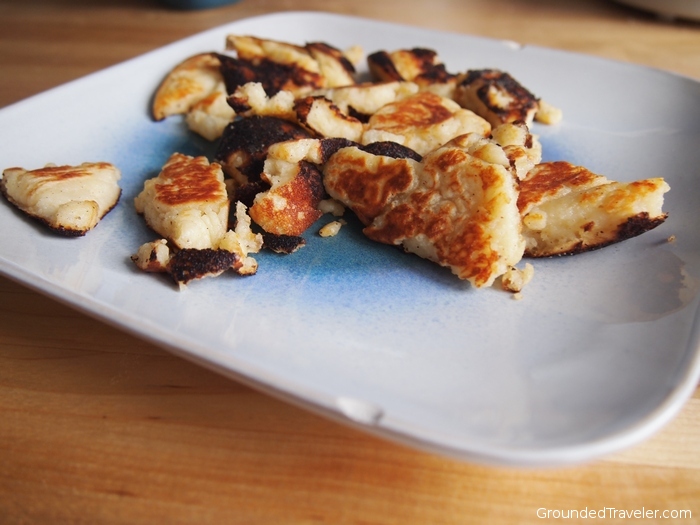 The result was actually fairly tasty despite the burnt. Some of the bigger pieces were still a bit mushy in the middle as well. And, as expected from a package mix, it didn’t end up as fluffy-dense as the stuff I had tried at restaurants. I will try it again. The Schmarrn will not beat me, though I have learned a few things.

It is often served as a dessert “in the wild”, but we made it a breakfast with some maple syrup. It is actually better than the pancake in a bottle that we tried a while back. Ali doesn’t like raisins, so we picked the Quark flavor without the fruits.

“You did not just say that”

So I tweeted about being excited about my Schmarrn mixture and I got this in response.

So if you want to try to make your own Schmarrn, check out the link. Me? I am more than happy to let other people make it and will continue to try my package mixes at the moment.

When I read the recipe I realize perhaps why the package will never work out the same though. In the recipe version, the eggs are separated and the whites are whipped up before being added back into the mix. This would certainly give a more puffed up version, but sheesh I don’t have the energy at breakfast time for that.

Have you ever tried Schmarrn? Even ever heard of it?