Compared to the US, Germany is fairly small. Despite which the culture and food is very regional. Even just a two hour train from Freiburg to Frankfurt brings you into another region with its own language and specialties. When we came up to check out the Frankfurt Christmas Market, we also got a chance to have a regional lunch in an Applewine Tavern. A woman from the Tourism Board met us and took us to a place across the river from downtown to enjoy some of the local food.

Jordis from the Tourism Board suggested a place in Sachenhausen called Atschel as a good local place for Frankfurt food. It was a frosty Saturday. In Germanic fashion, the place opens sharply at noon and we showed up at 11:54 to a closed door. Though right on time, the shutters roll up and let us into the warm interior. 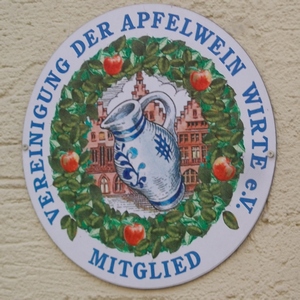 Trestle tables are scattered around a single room place. Wooden paneling extends up the wall with hooks for jackets around the edge. Just this little detail made it feel more local than touristy. I had seen it in a Kolsch Pub in Cologne too. The upper walls are decorated with framed pictures of various types of apples and a basket of fresh apples sits on the bar. This is definitely a place dedicated to its apples.

Ok, first look around definitely seems like a local’s place. We did hear a bit of English here and there, but I didn’t get the feeling that it was all tourists. Too far from the main square anyway. Good start for a traditional lunch. 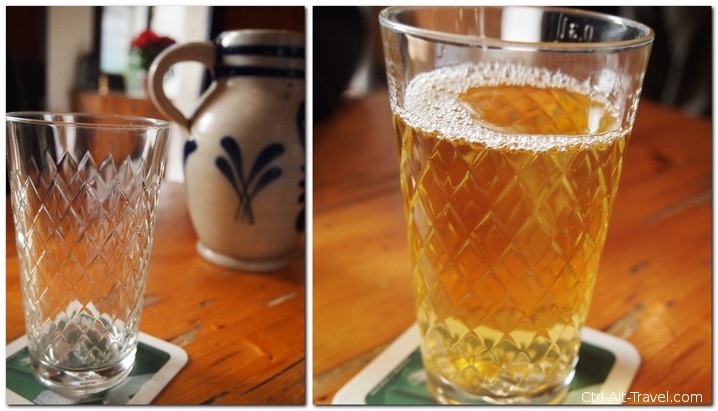 They call it Ebbelwoi in the local dialect. A friend back in Freiburg had warned us of it. He said it had a vaguely vinegar aspect to it. We were going to try it anyway. Got to get the sense of a local place and Frankfurt is really all about this stuff. I have never really been here and I had heard of it from a friend who is from the region.

I was very pleasantly surprised by the drink. It was really good. No vinegar taste that I could tell. And though similar in color is not as sweet as a cider. Yet the alcohol level is not that of a wine. We were told that it was closer to beer. I had a few glasses with lunch and while I was happy for the alcohol warmth when we went outside, I didn’t feel overly drunk.

My take on Applewine is that it was very refreshing and tangy. It really felt like a summer drink to me. Though we saw a few people having hot ones (with only a napkin around the glass to protect against the heat.. eesh). And we had a few hot ones on the Christmas Market which were excellent. So far the regional cuisine is putting on a good show. 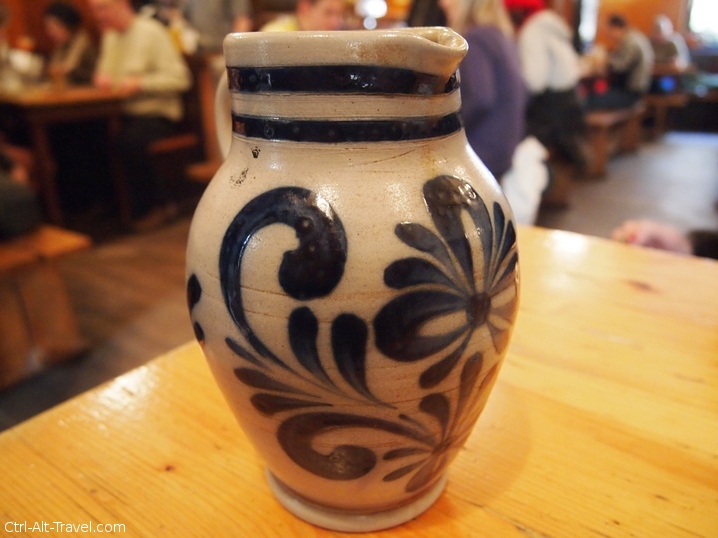 Applewine served in large ceramic pitchers called Bembel. We got the smallest the place had and it was enough for the three of us to each have a few glasses. The criss cross pattern on the glasses was something I had seen before as well. It is apparently the traditional glass for Appelwine. Just like with beer, I guess, each drink needs its own glass and this is it for the local Frankfurt drink.

Walking around the Christmas Market later, I saw places selling the Bembel with glasses. And even in the pub itself, there were larger ones hanging up. 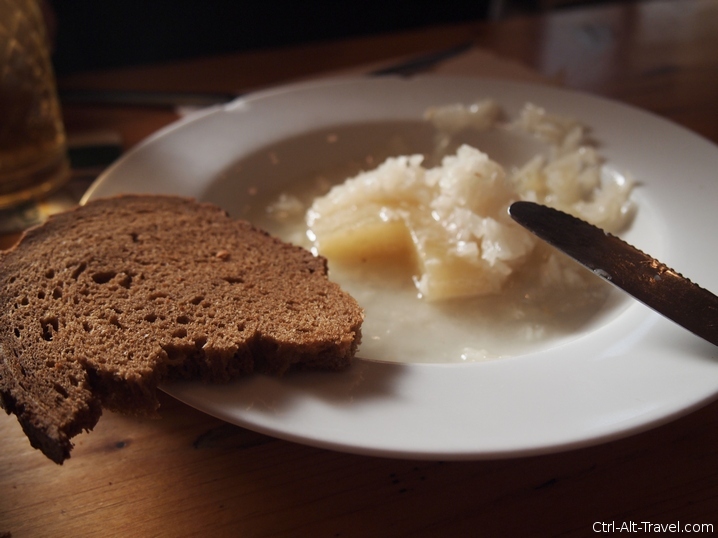 Usually we are not into getting appetizers. The portions at German restaurants can easily rival the Americans and we often split dishes. But we were in Frankfurt to experience stuff, so when Jordis suggested we try the dish called Handkaese mit Musik (Hand Cheese with Music) we said ok.

The only part of the name that is even descriptive is the “cheese” part. The small round of soft cheese is soaking in what seems like more applewine and covered with onions. Ours was served with a slice of dark bread and some butter. I am really not a fan of onions, but I did try the cheese. It was nice if somewhat unremarkable to me. Soft and a bit of the apple tang was there, but I was happier with the dark bread and butter. I did see signs on places across town mentioning it, so it definitely is a local thing. Maybe if I liked onions I would have enjoyed it more. 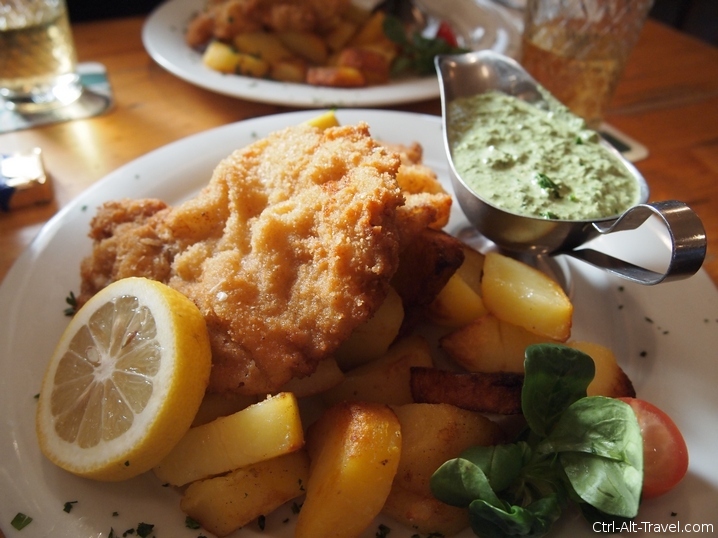 When we were talking with Jordis about even doing lunch, she talked about regional cuisine in two items “Applewine” and “Green Sauce”. We had tried the apple wine and enjoyed it, so now it was time for the Green Sauce. Again Ali and I were a little unsure about it. We had done a little bit of research and the description of “7 local herbs mixed into a sauce sometimes with a sour cream or mustard base” did not really appeal. It is however very common in Frankfurt.

We both ordered Schnitzel which came with the sauce for dipping. The Frankfurter Schnitzel is a lot like a Wiener Schnitzel though made of pork with just a few slices of lemon. I dipped my potatoes and meat bites tentatively into the green sauce and taste it. It is decent. The herby earthy taste comes through. In hindsight, I probably should have just poured it over the food rather than dipping to get the real effect. It is definitely fine, but not something I would go out of my way to order outside of the region. 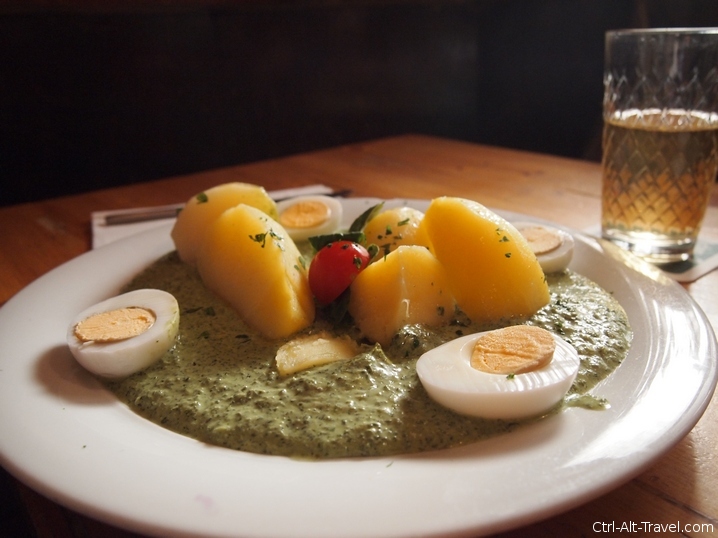 The other classic dish that apparently comes with Green Sauce is cooked peeled potatoes and hard boiled eggs. This was Jordis’ lunch, but I snagged a picture anyway. We had potatoes with our Schnitzels too. Those were awesome. Big chunks of potatoes cooked soft and lightly fried.

After all of that, she asked if we wanted an apple cake for desert. Ummmm no. Sounds tasty and wonderful, but there was no room left. Massive slices of meat with sauce and a heap of potatoes is really a filling meal. It is also a fitting meal, showing the meat and potatoes bent of German regional cuisine. Though the idea that the dessert is of apples seems to fit with Frankfurt too. 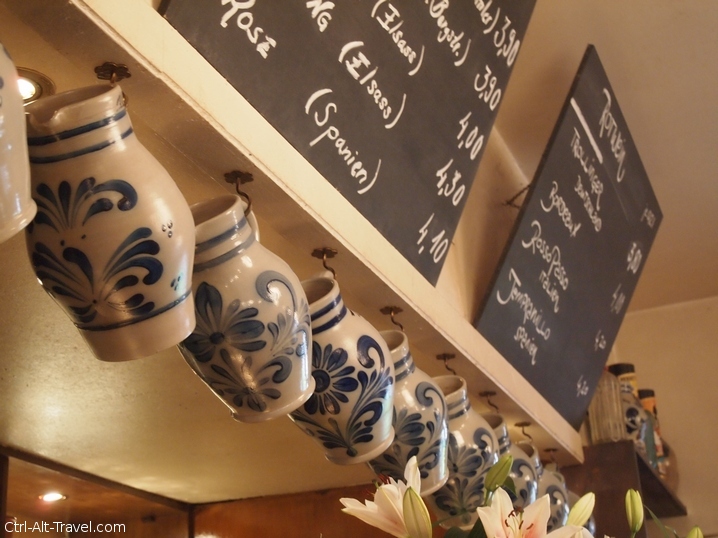 I loved the atmosphere of the place. It was warm and bustling. The menu was decently varied and the prices did not seem too high. The apple wine was awesome. Maybe because of the low expectations set by our Freiburg friend, I don’t know. I very much enjoyed it. The Handcheese was ok and so was the green sauce. I was happy have tried them, but wouldn’t go out of my way for it.

Frankfurt is often seen as just a transport hub, but if this meal is at all a signal, the region definitely has its own tasty character. The apple is king here, but the typical Germanic meat and potatoes idea is not missed.

We were the guests of the Frankfurt Tourism board for lunch and for the weekend. The opinions and descriptions are all mine. Thanks for Jordis for spending her Saturday afternoon hanging out with us and answering all of our questions.

Frankfurt Christmas Market : A Non-Instagram Photo Tour What can’t you get in Germany, than you can in the US?