Inside the Blue Mosque

The Blue Mosque is definitely one of the main symbols of Istanbul. The six minaret skyline profile is on everything from postcards to t-shirts. The outside is very impressive, no argument. It is grand and imposing. The stacked domes of the main building rise gracefully on top of each other toward the sky. Though the outside is plain in comparison with inside the Blue Mosque. The details and decoration inside the largest dome are wonderful and surprising. 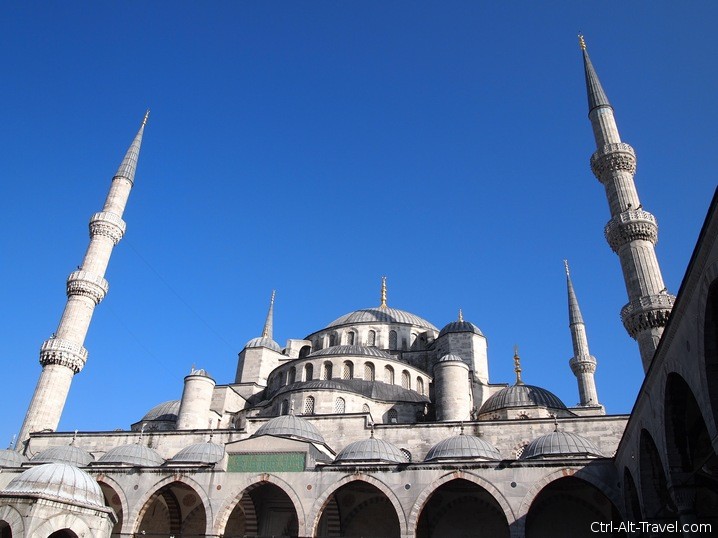 Detail of the Largest Dome

As you walk into the vast open room inside of the mosque it feels so open. There are a few pillars holding things up, but not many. The eye is drawn upwards very easily into the heights. The detail is evident everywhere inside this place, but I want to concentrate on the main dome a bit. Here is a view that is about what you would see without magnification. It is beautiful and you can just sense the vastness of it as well as the detail that lurks beyond vision.

>>Looking for something not so touristy? Check out this guide to a more local side of Istanbul. 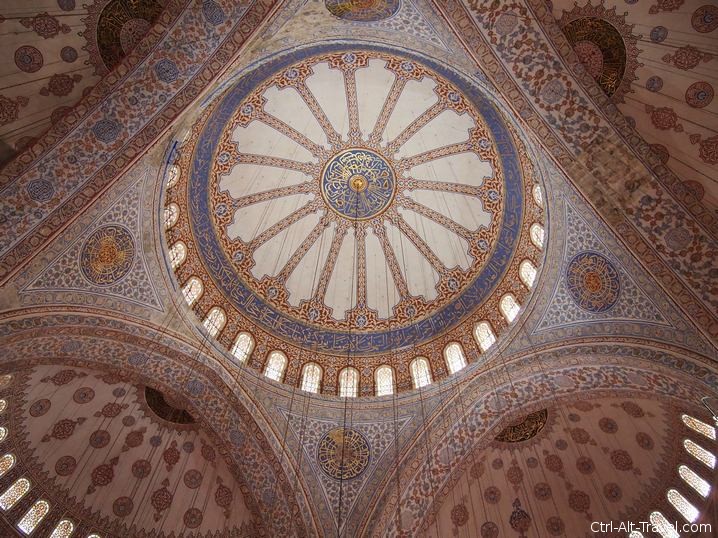 As I craned my neck ever upwards, I switched to my zoom lens that I had explicitly bought for this trip. The next few pictures are of different parts of that main dome just zoomed in to show the detail. The first is the center of the dome. Check out an even closer picture of the blue centerpiece on Facebook. 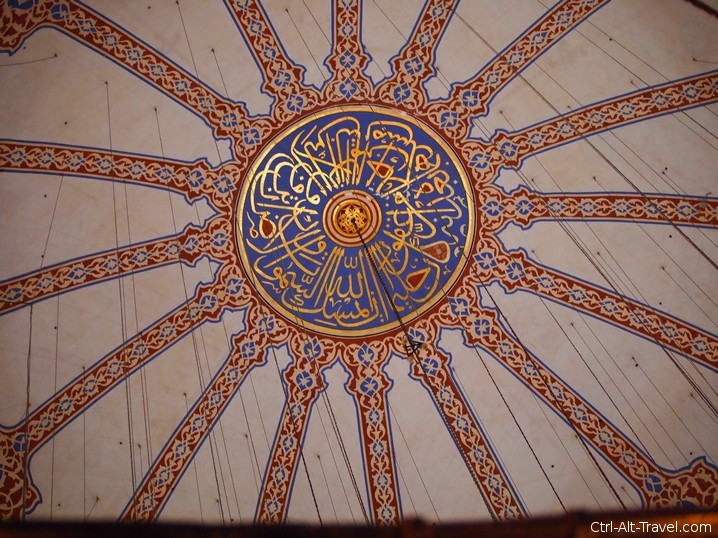 Beyond the radial pattern on the dome itself is a blue ribbon with what looks to me to be Arabic writing. Also check out the little stained glass windows as well. This is a massive place and no detail inside the Blue Mosque has been overlooked. No one would be able to read the writing from below, but it was put there anyway. 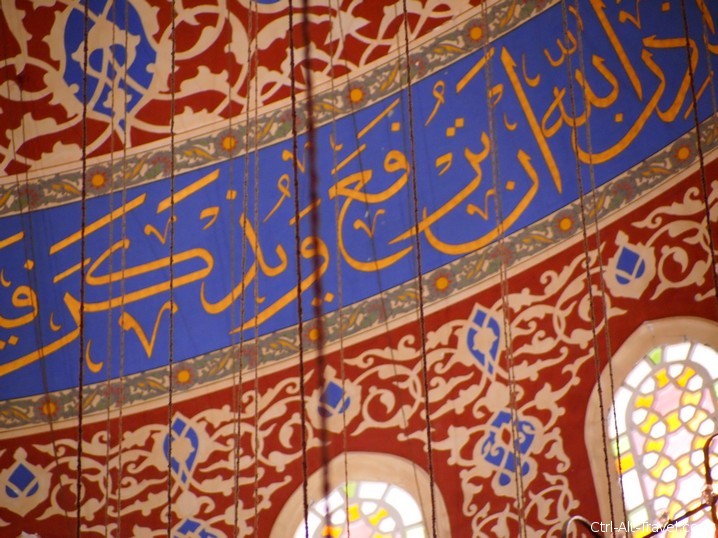 The main dome merges with other round domes creating triangles between them. Here is a detail of one of the four triangle areas around the main dome. Again a blue circle with Arabic writing that echoes the main dome centerpiece. 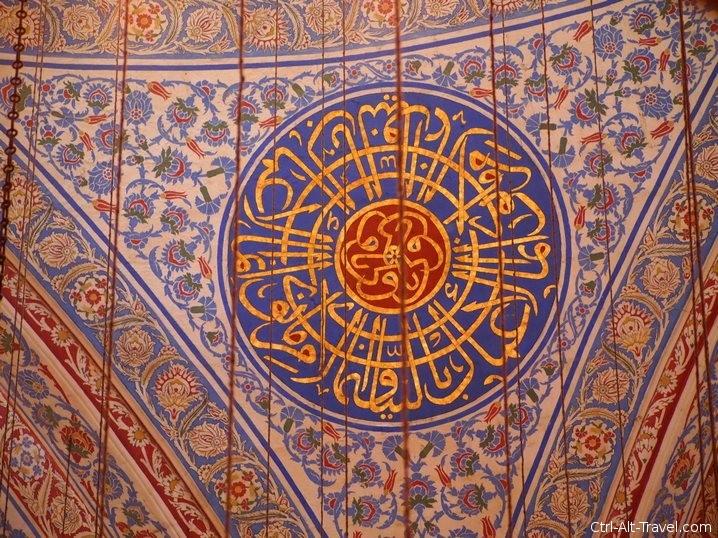 Other Views Inside the Blue Mosque

Lest you think the attention to detail is only on the one dome here are some other views. No, this level of detail extends to the floor all around. The next picture is taken just below the main dome. That triangular section is the same in both pictures.

This is also a good place to mention the vertical lines in all of the other pictures. At just above head height are suspended metal grills with lights. Since there are not many support pillars and the ceiling is so high this would eb the only way to have light near the ground. The vertical lines are the numerous support wires that extend from the ceiling. 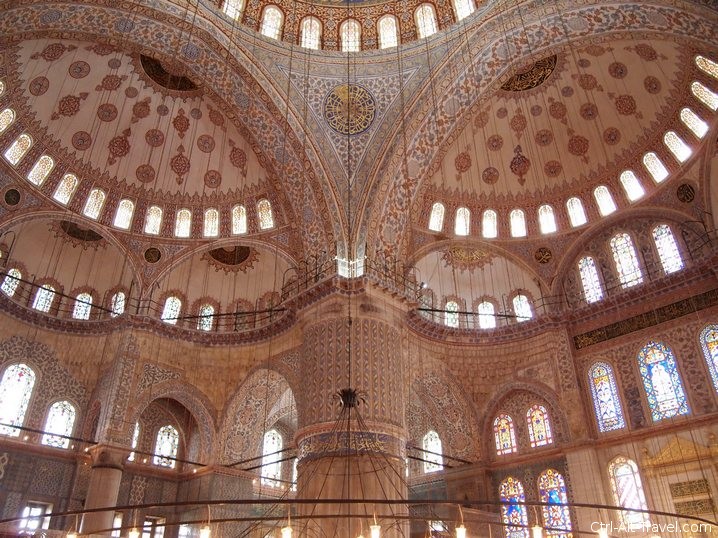 Several smaller side domes are just as intricate as the main one and yet still echo the same basic structure and decorations. 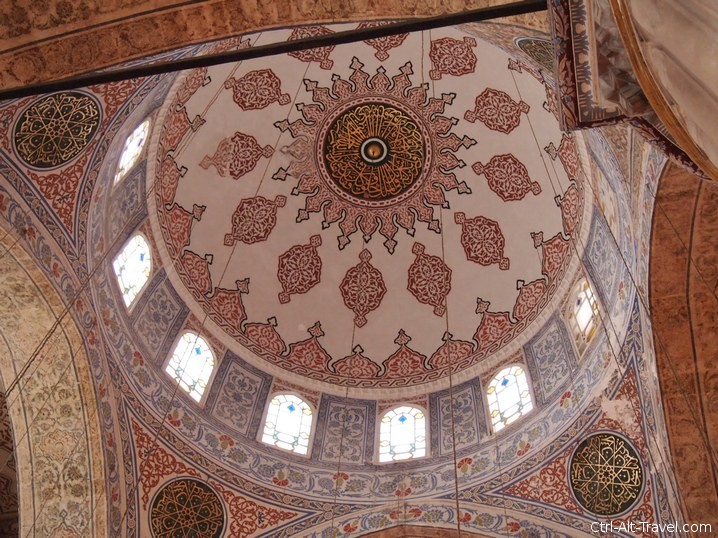 Here are a few zoom shots of individual decorations up in the ceiling somewhere.

The Sultan Ahmed Mosque also known as the Blue Mosque was built in the early 1600s. In places definitely it shows that age. A few areas of the painted decoration were flaking, but still the place is very well taken care of. I cannot imagine the effort it takes to keep that ceiling with its decorations in good repair. Just to get up there must be a chore, especially through the various wires. 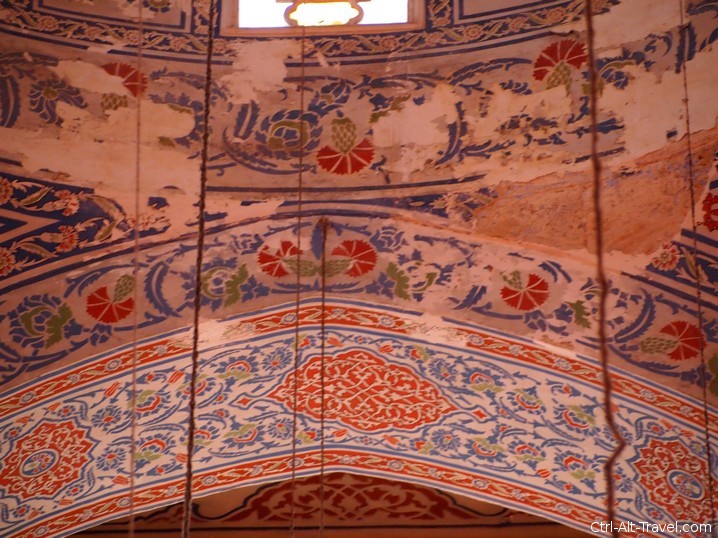 The Blue Mosque is an amazing building and totally worth a visit while in Istanbul. We went twice, read Ali’s account with more photos here. Once to see the outside and hang out in the courtyard. We couldn’t get in due to prayer time, so we had to come back. It was worth it. Even just the 20 minutes we managed to get in before yet another prayer time started was amazing. I was happy to have a zoom lens too. The detail is so intricate especially given the size and age of the building.

German Beer Vocabulary Germany gets dark in the winter