How (not) to take Self-Portraits

It is nice to have a picture of yourself while traveling. Unfortunately when traveling alone sometimes you have to take matters (or in this camera) into your own hand, stretch out your arm and click. I know you can ask others, but really I am both shy and slightly mistrustful of the photographic abilities of others, so often I prefer my own shots. Extra bonus that I can be goofy over and over without upsetting a tourist holding my camera.

Here are some things I have learned in the past few years taking travel pics of myself. A lot of these are similar to those of taking normal pictures, but bear repeating in the context of self portraits.

So you want to blind yourself for the best possible picture? Yup, sometimes that is a good idea. Sometimes though it isn’t worth it. My glasses like to reflect and I can’t keep my eyes open anyway, so that just ends badly. If you wouldn’t take a picture of someone else with a flash, then likely it won’t work out for yourself either.

That said, it’s digital. Take one with a flash and one without and see. I have found though, if it is dark enough background to need a flash, it is unlikely to be a good shot.

Looking right into the sun isn’t so much fun anyway and although it means no worries about flashing, squinty eyes may be in your future.

Think sunglasses are the remedy? Sure there is a cool Matrix “take the blue pill” picture, but still no eyes to be seen. Not to mention, no way of passing this off as anything other than taking a self portrait.

Be mindful of the focus

Try to hold the camera still while pushing the button at a weird angle. It isn’t as easy as it seems, so it is worth taking a bunch of shots. Again digital camera, so bad pictures can be ditched easily. I find on the tiny screen on the back of the camera that it is hard to see if something is in perfect focus or not. So multiple shots will help raise your chance of a good one.

This is the hardest part for me. How to compose a shot that I can’t see. If your camera has a fancy flip out screen, then good for you. You have a chance. For me, I often know I want the camera pointed at my face AND something in the background. Just trying to figure out where those two things are relative to each other is a bit of a challenge.

As you can see I often end up with my face in front of the thing I want in the background. Or the other side, just barely in the shot at all. Although some of these pictures have turned out as my favorite shots from certain places.

I don’t know why I forget to smile. Maybe I think it is stupid to smile at my own hand holding a camera, but really a happy expression goes a long way to having a nice photo. 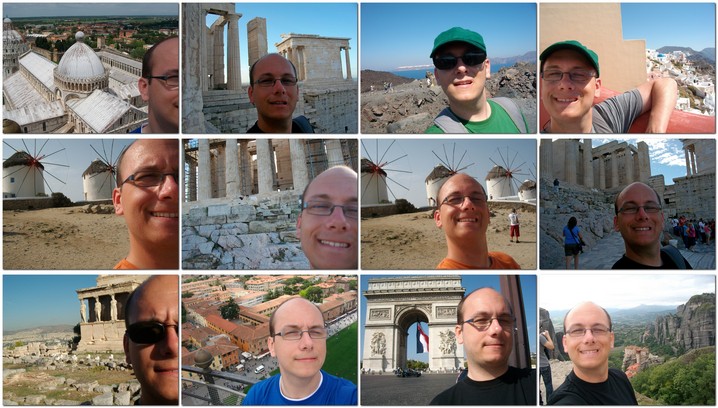 Number one recommendation from me about taking pictures like this is..
take a bunch.

Seriously, as much as I like some of these pictures, there are tons that turned out so badly. Even with friends around, this can be a fun and goofy way to record a trip. Check out more on the Facebook pages of both Grounded Traveler and Ctrl-Alt-Travel.

Dive into a Bächle Transportation in Germany