We live in Freiburg, Germany. The Bächle are a unique feature of this Black Forest town. They are small gutters alongside the roads in most of the old town which run with clear water. It is clean enough that kids play in them in the summer.

The entire old town has them and they vary in size from about a foot across and deep to nearly a meter wide and deep. Most are of the smaller variety though. Here are some pictures from inside a Bächle.

Bächle is a very local word. Bach is the German word for stream. There are a number of syllables that can be added to the end of a word to make it a smaller version of that word. In Baden, that suffix is -le. So Bächle means little stream in Badisch. 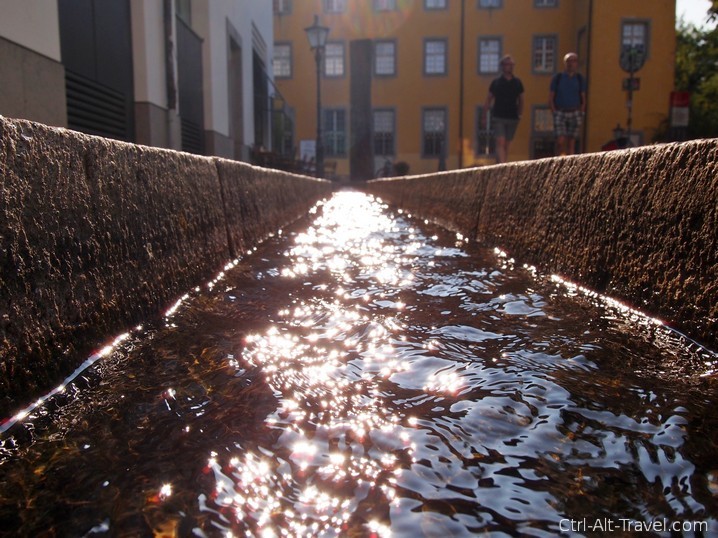 As to the Why? of the Bächle. I have heard everything from drainage, to sewer, to medieval fire hydrants. Now they run with water controlled from a central station, so somehow the fire hydrant idea makes the most sense, as sewage and drainage wouldn’t have such control. 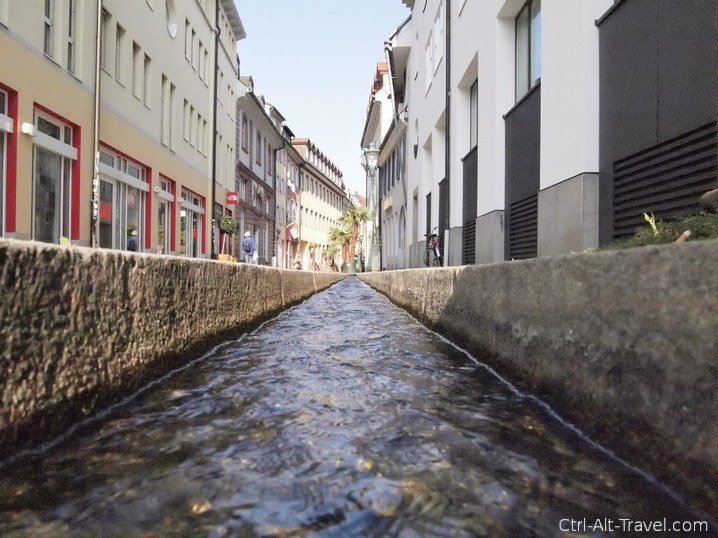 As a local you get used to stepping over them and not into them. The local legend is that if you step into one, you will marry a local. I have fallen into them a few times (head in the clouds means wet feet here) and still married a foreigner.

Every once in a great while some driver unused to the Bächle thinks they can drive over them. You can’t, so they get stuck and have to be pulled out. 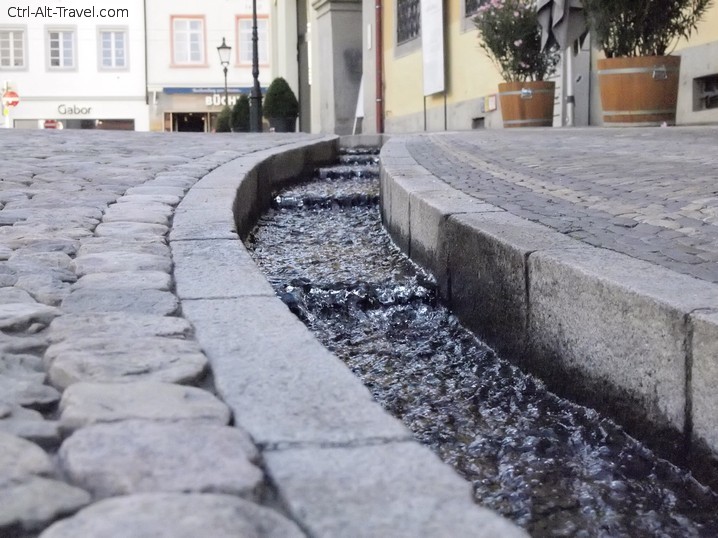 Augustiner platz is a wide sloped plaza near the Augustiner museum. While most Bächle are slopped a little bit to keep the water flowing, these are sloped so much that they have little waterfalls.

I had such a blast taking pictures here. The water is mesmerizing and ever changing. Little waves kept coming down the stream as well. And the perspective from holding the camera so close to the water was so fun to see. 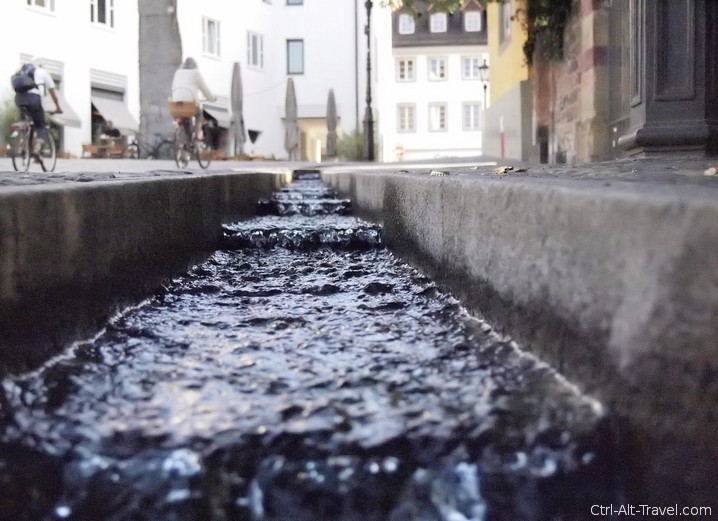 Since Augustinerplatz is such a popular place to hang out and there is a playground nearby, I often see kids and parents alike with their feet in the water here during the hot summer days. 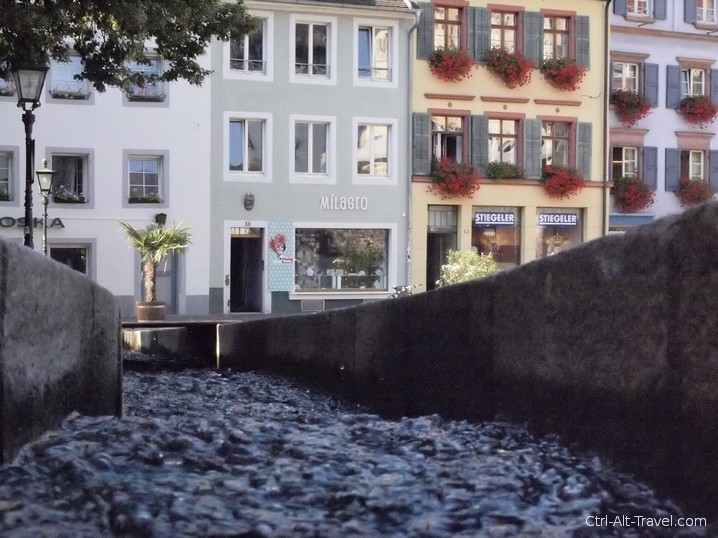 Martinstor (Martin’s Gate) is one of the old city gates that remains standing. Not only is it a very recognizable icon of the city, but it also has a McDonald’s in it. This is a Bächle nearby, just to show that they really are through the center of town.

Whenever there are festivals in the center, they have special metal plates placed over the streams to let people walk without tripping as well as keep electrical cables out of the water. 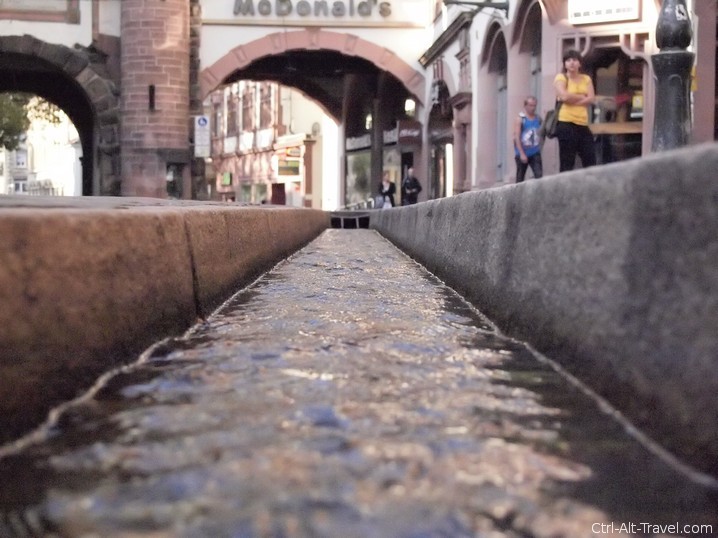 There is a stall near the market square that sells brightly painted Bächle Boats. They have a string on them and kids pull them along the Bächle. This is one of his advertising boats in the water. I like this picture as it just screams adventure to me. 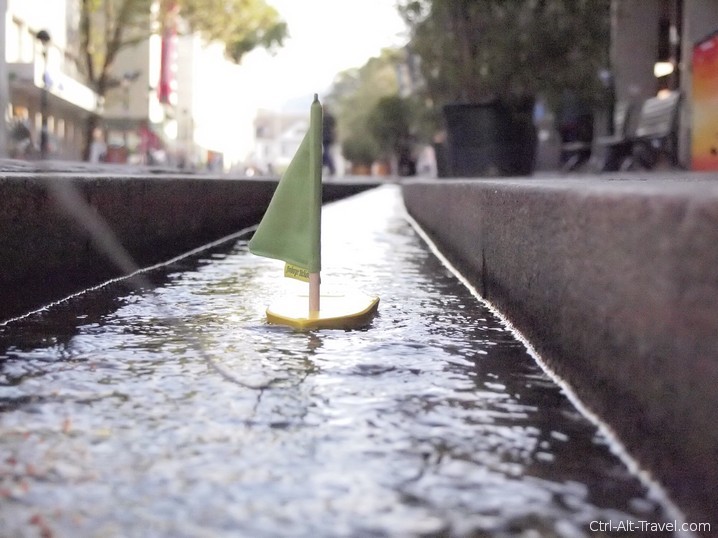 The Bächle are amazing and unique things to me and just scream Freiburg and thus home.

Summer Plans How (not) to take Self-Portraits