This month’s Expat Blog Stammtisch topic is Favorite Places in our German hometowns. So that means I get to show a few places around Freiburg that I like.

Although Freiburg is a city of nearly 220 thousand, I spend most of my time in the old city. So all of these are in that area. It is a city of students and of nature lovers. At the end of several valleys into the Black Forest nature is a big part of the town and its people. This is not a place for hectic chaos, but of relaxation. 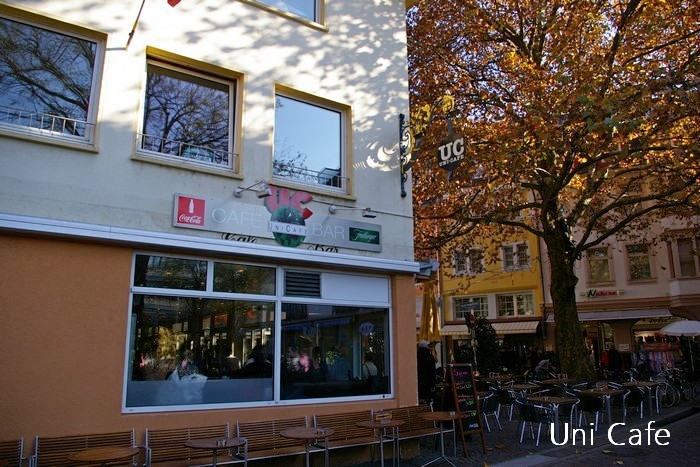 I find this area of town to be some of the best people watching. Uni Cafe has a large outdoor area under a tree on a cross road of pedestrian streets in the area of cafes near the University. A lot of people walk through going on their business.

It has great cheap cocktails too for nighttime people watching. Especially when the old town puts on a festival. 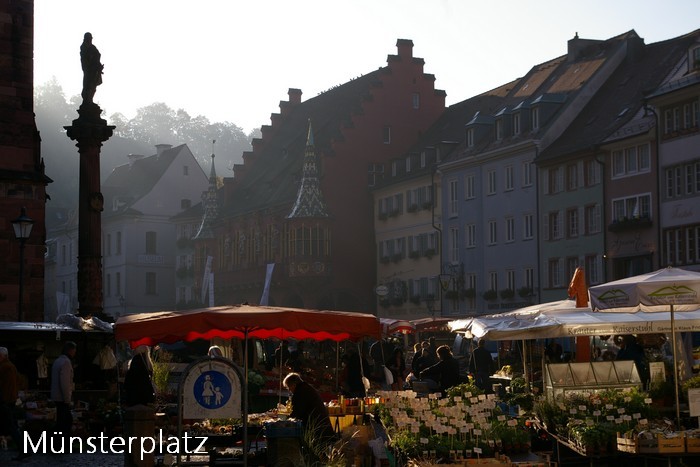 The cathedral square, especially while the market is on, is one of my favorite strolls. Especially when I am in no hurry, it can be relaxing almost to be amongst the bustle. I like to hear the sounds and voices around me. It feels like the center of town and makes me think that it must not have been so much different in medieval times. The towering church in the center of the square help that.

It isn’t just a place to enjoy, but also very practical. We buy our vegetables there every week. Yesterday we walked down an arm of the market that we don’t go very often. The imported foods stalls. The smells of the peppers, olives, garlic and feat cheese are mouth watering. If youhappen to be hungry, we often go for sausages from the stands for lunch and can recommend it. The market is a nice place to just experience life and be around people.. 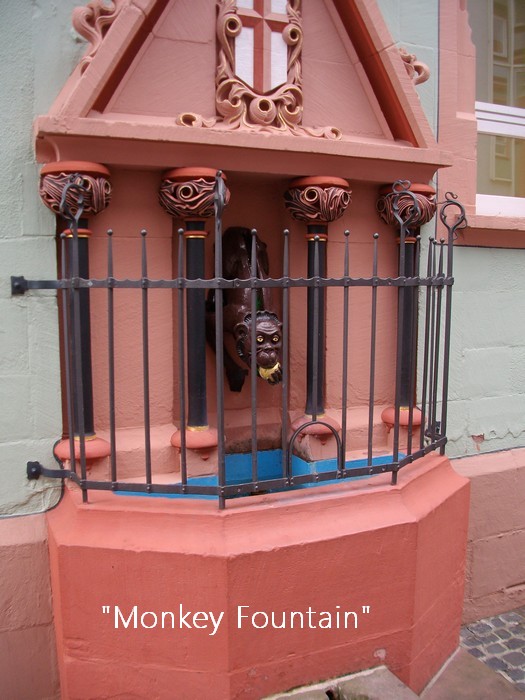 From the well-known to the overlooked. I kind of find this fountain creepy. The eyes almost follow you. It is on the back side of the main bank building in the center of town and near the Kartoffelmarkt square. I know zero more about it, but I like the oddity of it (even if it creeps me out). 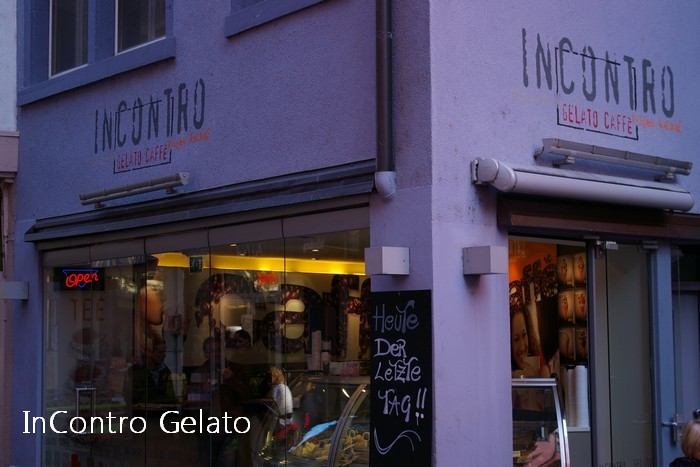 Ice Cream and Gelato places are scattered around town. Every square has one and a bunch of cafes scoop out of their windows too. This is my favorite. InContro is near my people watching cafe above. It has inventive flavors based on candy bars and fruits in addition to the standards. It is probably too convenient to my office for my waistline, but I like it. My favorite is a caramel based flavor called Lion. 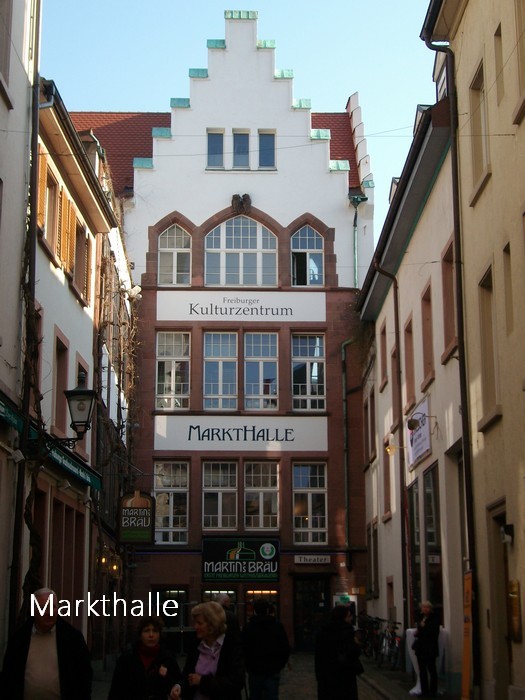 I am a quite simple man. I like simple but good food. A few ingredients and no fancy plates for me please. Markthalle is a Food Court place in the former printer of the Freiburg Newspaper. Stands for all manner of food face into an open area with places to stand and eat. The pasta place in there counts as some of the best pasta we have had in the world. Everywhere we order pasta always gets compared back to it. 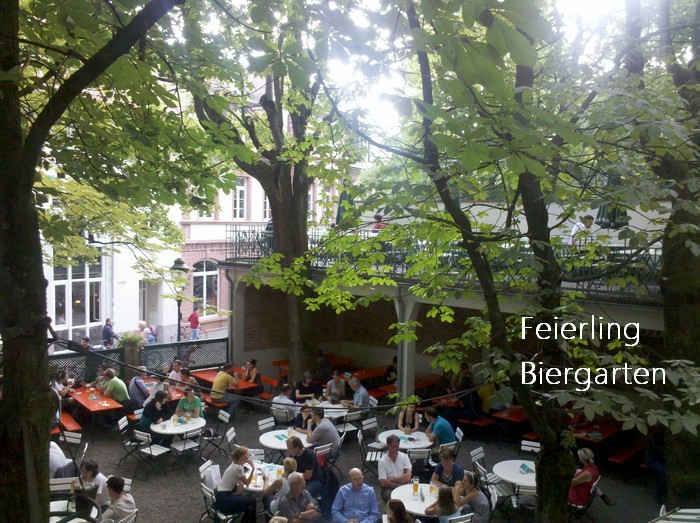 Although Ganter is the large local brewery, Feierling is my favorite. It is an unfiltered pilsner brewed on site and named for the island amongst the canals that the brewery sits on. The beer is slightly sweet almost like a hefeweizen, but as a pils. It was one of the first places I had a beer in Freiburg back in 1999 when I first step foot in Freiburg as a study abroad student. And still one of the best since. 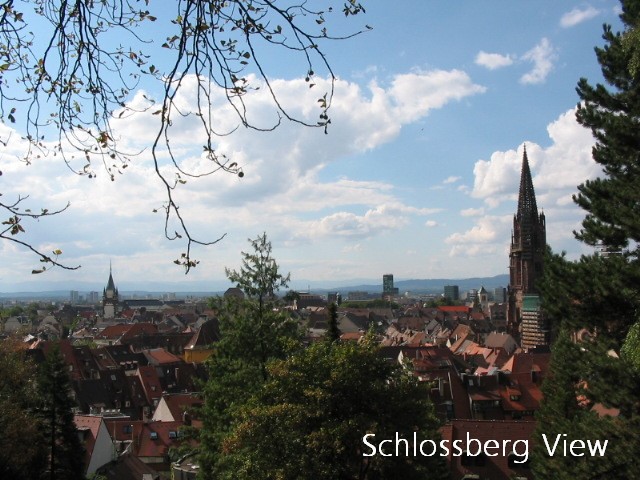 I don’t go up to Schlossberg very often, but it really is the best view in town. You can see the old city gate towers sticking up around the old town and the cathedral rising from the buildings. The rest of Freiburg spreads out away from the mountain and you can even see way up the valley into the Black Forest. Although the castle that the hill is named for is no longer there, it is obvious from up top why Freiburg was a defensible spot and why it became a town.

There is a beer garden on the first level walking up and an observation tower to climb as you keep going up. If you feel the need to go hiking, pick a trail and a direction and go. Although I don’t go up very often, it is still the best view of my new hometown.