One of the main reasons that I wanted to be an expat was to travel. Yes, I like my home and love having a warm comfortable place to be, but one of the main urges was that, “hey I’m so close to things I want to see.” We are trying more to remember this and go do trips. Turkey has been our honeymoon goal since Ali and I got married last year. And it is really only 3 hours on the plane away.

For Grounded Traveler as a blog, I’m concentrating more on expat and Germany writing of late. Though as travel is such a big part of being able to live in another country, this still seems perfectly appropriate. I started a new project last week called Ctrl-Alt-Travel for my more travel oriented writing. It is still very new, but feel free to check it out. 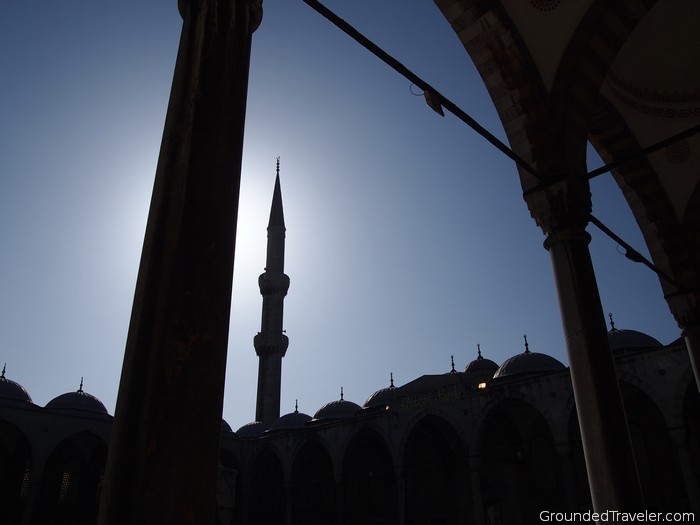 Turkey is amazing and was great to step out of our life for a few weeks. Travel can be rejuvenating and sometimes you just need a few steps out of your world to realize how well you have settled into your expat home. Ok, we have been planning this trip for a long time, but it came at a good time for us. We spent two weeks and saw a lot of Turkey, but no where near all of it. It remains on our list to go back, especially to see more of Istanbul. 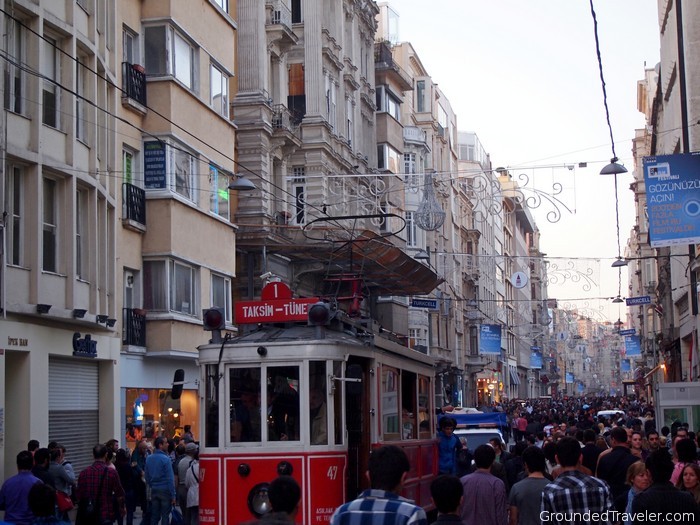 Hectic and chaotic. Built up and quite steep in places. Towers and sandwiches abound.  4 days is really not enough to see all that Istanbul has to offer, especially if several of those days are rainy. Part of the reason we need to go back is that a few things had to be skipped due to the rain. We were there on Easter weekend and it was good few days (again despite the rain). Istanbul scratches the big city itch that Freiburg just can’t. It was great to see things open until late in the night and have so many people walking around.

We stayed near Istikal and Taksim, which is quite a steep area, but also quite active with places open late. It was nice to be away from the tourist area, but I think I would stay in Sultanahmet next time. 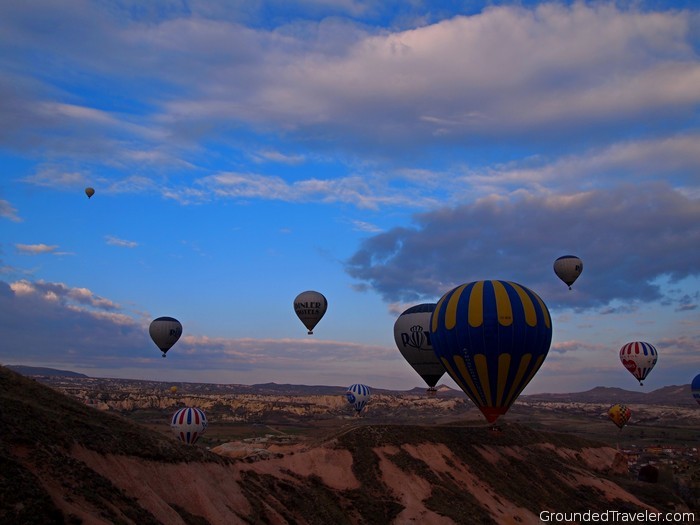 From Istanbul we took a quick flight out to central Turkey to Cappadocia. This is an area of unusual rock formations. The town of Goreme is well known for the hotels that have dug into the soft rocks and offer rooms made like a cave. So of course we booked a cave hotel based on a recommendation from a fellow blogger. It was a good choice with a very helpful guy at the front desk.

The biggest attraction here is ballooning. An early morning wake up leads to an hour floating above and amongst the rocks with a hundred other balloons. Seriously, it is beautiful and not at all scary (remember me, scared of flight). Bring a camera and an empty memory chip. It will be full soon. 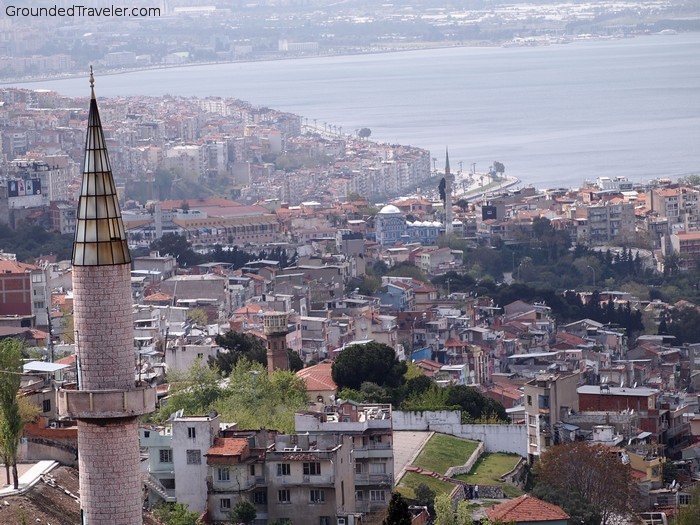 Izmir is not necessarily well known. It is kind of a bigger city and on the tourist trail is known as the nearest airport to Ephesus. The town is actually pretty cool and worth a day if you happen to be nearby. There is a castle on the ridge an ancient agora and some neat streets to walk through.

After a rough flight to Cappadocia I didn’t want to fly again so soon. So we had a wild day of cross country buses and quick changes to get to Izmir. We had enough time to see the castle before the skies opened up and drenched us. When we come back to Turkey, I would definitely stay another night or two here to see some stuff we had to miss out on. 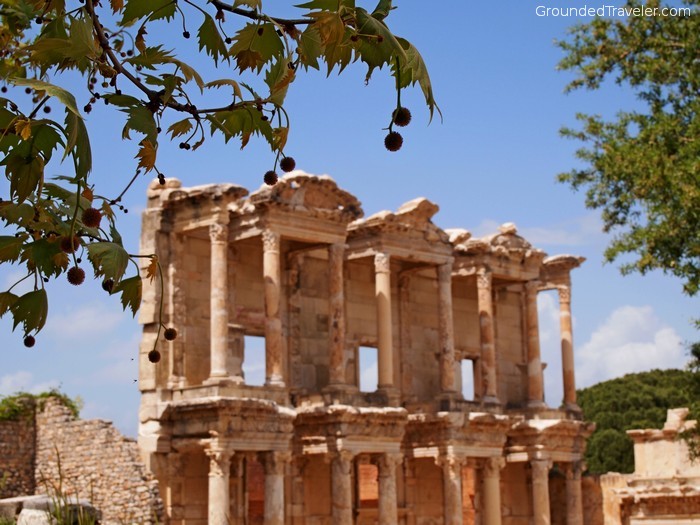 Ephesus near the town of Selcuk was the highlight of our trip. The ruins are really impressive and Sulcuk town is cute and active despite its small size. It is definitely worth staying a night or two if only to have your leisure to walk through the ruins without a tour bus. There are even ruins of a Christian cathedral on the hill in Selcuk that were quite nice to walk through.

Don’t let yourself get talked into just a day trip to Ephesus on a bus or a plane (seriously, we saw advertisements for a daytrip from Istanbul involving flying to Izmir an hour away). Selcuk is a really cool, if small, town. 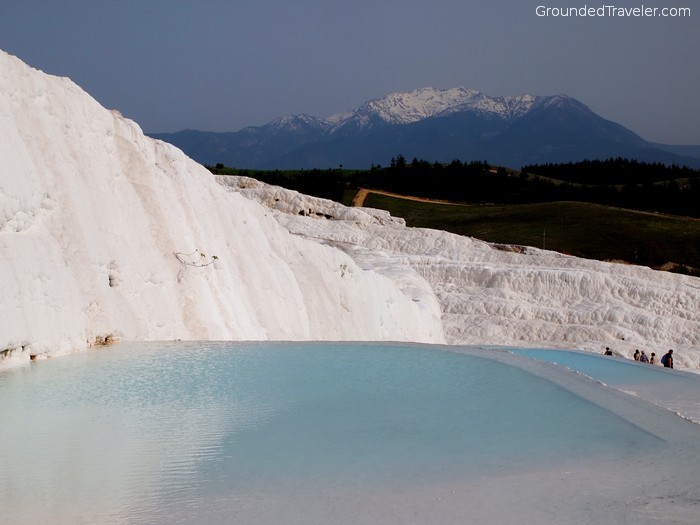 This was our wildcard visit. I knew the white cliffs here were amazing and worth seeing, but nothing more. Another day of buses and the closest thing to an aggressive pushy salesman(beyond “want to buy a carpet”, we felt trapped) we saw in Turkey later we ended up in Pammukale. Again well worth staying one night to have your time in the ruins and walking the travertines. Though we stayed two nights and that was probably a little much, it still was a great place to see and we met some great people there too.

This is another place that is totally worth doing at your leisure. There are the ruins of a Roman town on top and the white travertines to walk down. We heard a bus driver shouting at his herd that they had 45 minutes to see the white cliffs before having to be on the bus halfway across the ruins. Most people only get to the first two pools, so those are the ones that seem to get ruined the most. The best places are down further. And it is open 24 hours for your night time walking pleasure.

You can see how much we did in 2 weeks. It was a little fast and we could have taken it slower, but it was great to get such an overview of Turkey and at least a few different aspects. We were never going to be happy on a resort beach lying in the sun doing nothing. If we take vacation time and fly to a place we really want to see it.

Turkey is a great place for a honeymoon. Although we didn’t do it, there certainly are the beaches and resorts. Even if you go that way, get out and explore. There are some great historical places to wander through and see that civilization has been around a long time. We need to go back, but the long wait and build up for going to Turkey as our honeymoon did not disappoint.

Help me decide in what order I will write about the Turkey trip in detail on Ctrl-Alt-Travel. Share your opinion in comments, always other feedback is always welcome.

Life in Germany – Football Fever The Mensa: More Than Just A Hot Lunch!

Inside the Blue Mosque