Life In Germany life in germany

The Life in Germany series continues. The aim of the series is to show insights into all aspects of life iN Germany. I’ve asked a number of friends and Twitter acquaintances who have or are living in Germany to write a look into their life here.

Kim of Top Floor Corner offers this piece on Fussballfieber (Football Fever in German). She has lived in Magdeburg since 1997 and married to a German there. Hailing from Mississippi in the US, soccer was never a big thing before she moved. Since she has lived in Germany she has learned to love the national sport. She has followed the return of being proud to be German and how football has helped and shares some insights to this development.

The pictures are hers as well of signs of the continuing fervor around the current Euro 2012.

When I moved Germany I knew very little about football (soccer).  If anyone had asked me who the top national football teams were, I probably would have mentioned a country like Mexico (wrong!) but would have neglected to mention Germany, despite their having won the World Cup three times and European Championships three times – the last time having only been the year before my arrival in Germany. But my German husband is an avid football fan and I spent the first few years of my life in Germany learning the ins and outs of the game.

My first brush with a big tournament was the World Cup held in France in 1998.  There was the expected enthusiasm from regular football fans but Germany performed dismally that year and once they were sent home after the quarter finals, I lost interest in the tournament.  So did a lot of others.  The European Championships of 2000 didn’t generate too much more excitement.  If you were a football fan, you were into the tournament.  If not, you probably didn’t give it much notice. 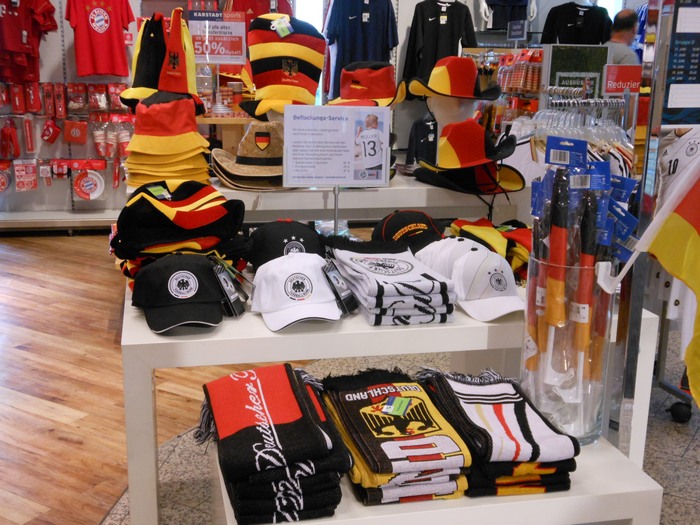 In 2002 the World Cup was held in Japan and South Korea and this time around I was more enthusiastic about watching it.  That year Germany’s national team was much better and as they continued to progress through the tournament to the final game, the excitement in the country grew.  I recall one Saturday when Germany was scheduled to play at 8:00 AM German time.  Bakeries opened earlier than normal that day to accommodate those who wanted to be settled in front of their televisions with their breakfast Brötchen before the match started.  I was one of those standing in a long line at the bakery and the upcoming match was the only thing those of us patiently waiting could talk about.

Things really changed when Germany was chosen to be the host of the 2006 World Cup tournament.  By then I was a big fan of football and no one was happier or more proud than me that Germany was going to host the Cup.  While on one hand it seemed sort of cheap and opportunistic, I still got a little thrill out of seeing World Cup themed everything for sale in the shops.  There was virtually nothing that could be sold that didn’t get tied in to the World Cup.  I still have my football shaped jar that Nutella was sold in during that time.

Flag Controversy leading up to the 2006 World Cup

In the weeks before the tournament there was a lot of controversy in Germany about so many German flags being hung everywhere.  Germany’s dark past has kept many from making obvious displays of national pride and there were many who felt it wasn’t proper to be so proud of Germany.  I recall discussing it at the time with other expats living in Germany and many agreed with me that it seemed like a perfectly normal thing to do, especially the Americans among us who are more used to seeing flags hanging everywhere and pride is something Americans brag about having.  My thought was that Germany had a golden opportunity to present a new face to the world – one that could show off their well-known ability to be organized and efficient along with a friendliness and knack for hospitality that visitors may not normally expect.  Things about which Germans could definitely be proud.

By the time the 2006 World Cup started, most people seemed to accept the idea that the Schwartz-Rot-Gold (black, red, gold) of Germany was going to be seen everywhere.  People who weren’t normally fans of football got caught up in the fever of the tournament and for the first time I really began to feel like I was becoming a real German too.  I wanted to participate in that feeling of pride that was seeing a revival in Germany.  The German national team felt like my team too, even if the United States had it’s own team in the tournament.  The US team didn’t feel like mine.  I wasn’t terribly familiar with the US players while I knew the German national team inside and out.  It’s the first time I can say that I felt more German than I did American. 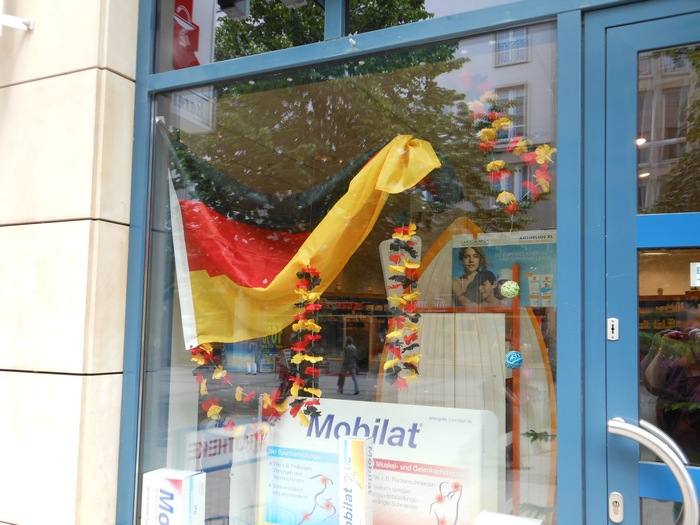 And the feelings continue

Since then Germans have continued to keep up that level of national excitement about the World Cup and the European Championships.  Right now Germany is in the throes of Fussballfieber (football fever) because it’s time for the Euros.  One can hardly turn on a news broadcast without seeing coverage of the event.  If you’re living in Germany in a year when it’s time for one of the tournaments, it’s a great time for you to participate as the Germans do.  Pubs, beer gardens, sports bars and outdoor viewing venues are perfect places to mingle with the fans and get swept up in the fun.  It doesn’t matter where you’re from – if you’ve got on a t-shirt or hat or even just a little Schwartz-Rot-Gold makeup striped on your cheeks, you’ll be welcome.

Ten years ago I probably couldn’t tell you where to buy a German flag because I never saw any for sale.  Now nearly every shop sells them when it’s time for the big tournaments roll around.  The thrill and anticipation of seeing the German national team do well is infectious and binds Germany together.  I look forward to it because it’s one time when I feel like I absolutely fit right in.  Get caught up in the Fussballfieber and you’ll fit right in as well.

Kim Gutschmidt moved to Germany for love and stayed for the Schmalzkuchen. She’s the sole caregiver for her quadriplegic husband. Kim is also an avid knitter, reader, music geek, and has a fascination with Lincoln’s assassination. She hopes to one day be able to play more than six chords on her ukulele named Lira. You can read about all these things in her life on her personal blog at www.topfloorcorner.com.