Biergartens – From Practical to Cultural

Biergartens started as a practical aspect of running a brewery in the mid 1800’s and have developed into another cultural icon. Spring is here in Germany and it is also time for another month of the German Bloggers Stammtisch roundtable. This month the theme is parks and green spaces from Adam. Here is my look at this wonderful type out outdoor space, the beer garden.


From Practical to Cultural

At one point in history, great caves underneath the ground were needed to keep beer cold. These caves were covered with dirt and had trees planted upon them. All of this in an effort to provide as much insulation and shade for the beer as possible. When the breweries started selling beer directly, people started noticing the nice parks that had sprung up nearby. Shady grassy spots are just as nice for family picnics as they apparently were to keep beer cold. Thus began the biergarten(beer garden) concept. 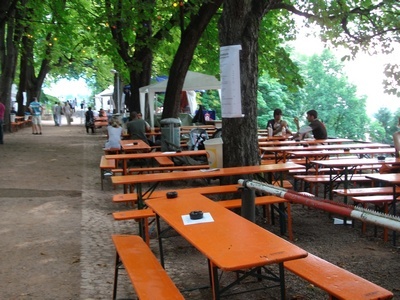 The idea has developed from then a fair amount. Biergartens attached to breweries traditionally allow food to be brought from outside although no beer(understandably). So bring a picnic and buy the drinks there. Nowadays, the beer gardens I have seen do definitely offer food for sale, although sometimes a fairly limited menu.

Here we are talking about the beer gardens that are traditionally attached to breweries. In an odd twist for Germany, apparently the name is not regulated so almost any outdoor place with beer service will be called a Biergarten. Most pubs label their seating like that and don’t really like the bringing of food. But definitely seek out the “real” Biergartens attached to neighboring breweries. These are special. 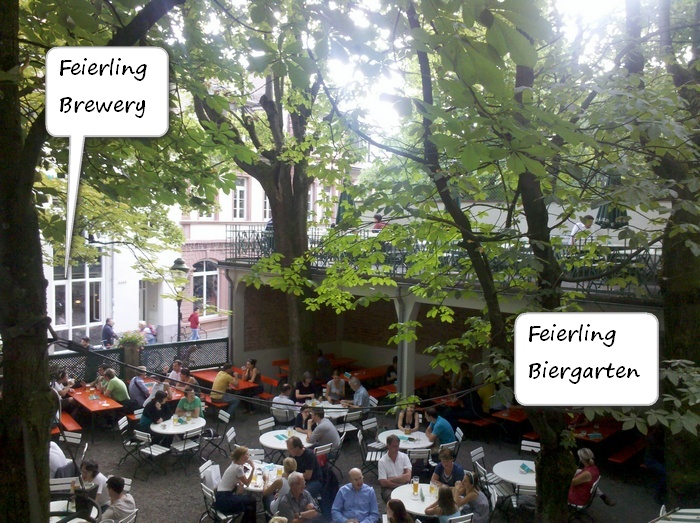 Germans are really into nature and being outdoors. They open their windows to get fresh air and sit in the last patch of sun in autumn. Beer is of course a popular thing as well, so beer gardens, the ability to be outside with beer, are very popular and will be full on a nice day. The Biergarten is however also a family thing. Far more so than other places with outdoor seating. It is a communal place to hang out with other people.

Traditionally an open park feel and often next to a river (breweries use a lot of water), this is just a perfect recipe for a nice place to sit outside in the summer. Every one that I have been in has the really long picnic tables and benches, so you can’t avoid being shoulder to shoulder with others. Add the social lubricant of beer and it becomes a place to be out in society enjoying both the outdoors and being around people.

The European Cup football(soccer) championship is coming up this summer. Every spot with a power plug will have a TV attached to it will people watching. I like going to the biergartens for this kind of thing too. Places to sit and more communal feeling and with better bathrooms than the open air public viewing. 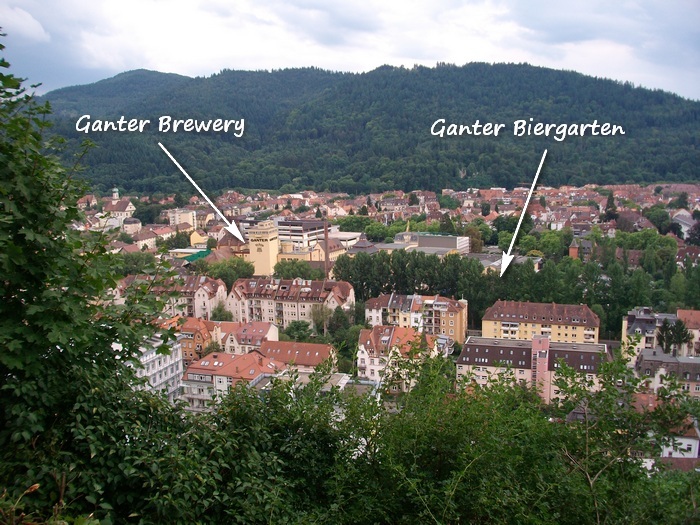 Although started in Munich, they are not exclusive to breweries in Bavaria. Freiburg has several really great ones and all close to the center.

I have mentioned Feierling several times on the blog and for good reason. It is my favorite brewery in town. It is small but great. The small two level garden backs up to Augustiner Museum and is across the street from the restaurant-brewery with its great copper brewing vats. Large trees shade the many large tables in the small garden. Waitresses offer table service for their own Inselhopf unfiltered beer and other drinks. The food menu in the garden itself is pretty limited, but in traditional fashion outside food is allowed. You can also order from their restaurant across the street and bring it back. No food delivery for that unfortunately.

Ganter is the largest brewery in Freiburg. Their logo is on most pubs in town. The brewery is not far from where I live and I bike by the river to work and back. As the weather gets sunnier and warmer their biergarten becomes much more active. The space is large and open and attached to the back of the brewery (the entrance is near the Aral gas station if you happen to be in Freiburg). There is no table service so go stand in line for the beer window. Food is basic German pub style sausages, schnitzels and fries with the odd salad thrown in. There are grills for your own food and a playground for the children.

This is my favorite place to watch the national football games for things like World Cup and European Cup. Ganter also does a 4th of July party that is neat. To see the German interpretation and summation of all of American culture is a sight (I’ll try to do a post on it this year.)

Ok, Kastaniengarten is not a traditional beer garden. It is on top of Schlossberg and not near a brewery. Though it has some of the best views of Freiburg. Head up Schlossberg at Schwabentor and take the steep paths and stairs to the garden. It spans both sides of the narrow mountain giving views over the town. Again no table service, order everything up at the window. Though they give you the beer direct and a little buzzer to call you for your food. Food options are standard German pub fare, but decent. Despite not having an attached brewery, this is still built in the beer garden style and will fill up in the summer months easily.

I have been in many a beer garden with and without attached brewery all over Germany. Pretty much no matter where, you will see someone out on a warm summer day enjoying a beer or two with friends. Adding outside to drinking seems to be natural for the German culture interested in doing both. A word on opening times, they are seasonal things, so rarely if ever open in the chill winter. Though they will often open on warm spring days and then close again if it gets cold. So even if it feels a little early, definitely check them out on a warm day and see if you are in luck.

Check out the rest of the Blogger Stammtisch group on the topic of Parks.

7 Beers And A Washing Machine Dogs in Public in Germany