Perhaps my office is just like any workplace in that the coffee machine is the center of the social life. This machine makes all kinds of combos of coffee and milk. Frothy milk with less coffee or even just plain espresso. I don’t remember our machine in the US doing anything other than just plain ole American black. Everyone seems to have their favorite type and it is a tragedy when the machine breaks. Even the few minutes to refill the milk holder can mean a line of 4 waiting behind you.

But, you say that is a normal office. Ok, maybe it is. Perhaps it is typical to offer coffee at the end of a meal after dessert. Even so it just feels like the national drink somehow. “Coffee and Cake” is almost another meal in the afternoon.

Maybe there is something more than just coffee here. Perhaps it is a sense of well-being and medical help from the rich blackness.

A form of Herbal Medicine?

Winter is a time of colds and sniffles. Even more so here than in the US. Population density is higher, we walk outside more and ride public transport all packed together and then there is the thing with opening windows. This past winter I noticed the oddest trend at work. Lemon Ginger “tea”. At some point large ginger roots and a pile of lemons appeared next to the coffee machine. People would cut a few slices of fresh ginger and a few slices of lemon and pour hot water over it. 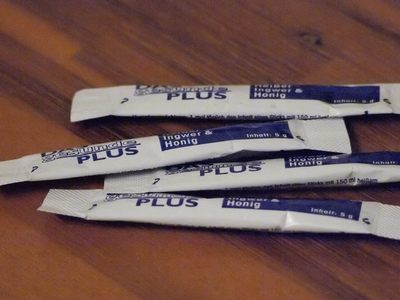 This must be a health thing. To the point that I can find the powdered form of honey and ginger tea in the supplements section at the drug store. In classic American form I would rather the prepared than the fresh version, but whatever.

They also have Hot Lemon in powdered form. It is what it says, hot lemon juice perhaps sweetened. I can so see it as a form of home remedy, yet it shows up on menus. Though on the menus I would expect a fresh version. I actually like the powdered form of it. There was apparently also a German physician who wrote of the medical benefits of coffee on the stomach. (Wiki)

Although Americans aren’t so far different in that Coke was originally touted as a medicine too. German society seems pretty heavily bound to these herbal and home remedies, so maybe coffee and hot lemon and hot ginger tea became some big thing because doctors said they were healthy.

This theory would also help explain the “taking of the waters” concept of drinking smelly hot water from the ground for medical purposes. This being the idea of health spas. I honestly don’t know, but health is a big part of German society. I’ll write about that at some other point.

And Calm You Down 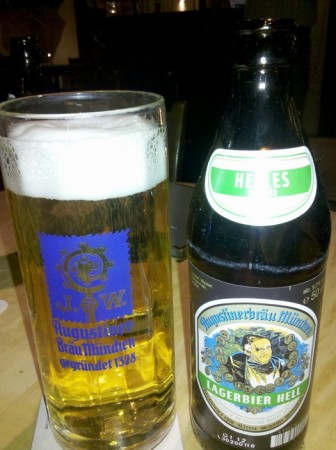 You came and clicked on a post about Germans and drinks, most likely expecting something about beer. Right?

Beer definitely exists in Germany and is drunk in great masses for any occasion(celebratory Tuesday anyone?) at nearly any time of the day. Beer is definitely still king in Germany, but coffee and hot drinks are queen and court.

Though I would to say something like “the Germans could do without beer, but not without coffee”, but it isn’t true. I don’t actually think society would work without either. Both are integral to the smooth running of things.

So as a parting word here are a few German words.

What is the strangest drink you have seen in your travels?

This is my entry to this month’s Blogger Stammtisch. Click below to see some of the other entries. May’s topic will be “Parks” with posts, as always, going up on the 15th.