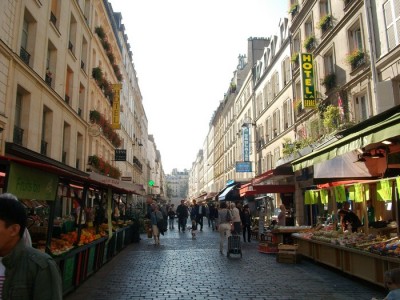 In coming to Paris for just a short weekend trip, I tried to keep my list of “must-sees” limited. Both Ali and I have been here before, so we had already seen the main sites. This meant we could be more relaxed. I wanted to see an outdoor market so I started searching for possibilities. I ran across Rue Cler mentioned as an outdoor market. It was close to the Eiffel Tower, so seemed an ideal spot. It was not quite what I expected, but cool nonetheless.

When I think of an outdoor market, I think an open plaza or street lined with vendors selling local fruits and vegetables with the locals all clustered around buying their weekly food. There is an atmosphere of European charm and the bustle of daily life. This is what the Naschmarkt in Vienna is like and our own cathedral market in Freiburg. 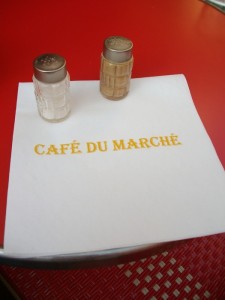 Rue Cler was not like this. It was however still a cool place. The pedestrian street is lined with stores and restaurants. Each store front had an awning on the street selling their stuff. The occasional market pokes through the awnings as well. So while it doesn’t match my image of a locals farmer market, there was a definite atmosphere of street life. Cafes of course had outdoor seating. In late September the weather was nice enough to choose to sit outside.

We had decided to go find breakfast as part of this expedition for an open air market. We looked at a few cafes and settled at a table at Cafe Du March. The breakfast menu offered juice, eggs, a croissant and a cup of tea or coffee for a decent price. We spent about 15 euros for the two of us splitting the large menu and each having a drink. The waitress spoke English and was friendly, dispelling some of the rude Parisian stereotypes. Having a French/English menu meant it was likely a tourist place, but I didn’t feel I was over-paying. The atmosphere was great to just sit on the street and experience our first morning in Paris together. 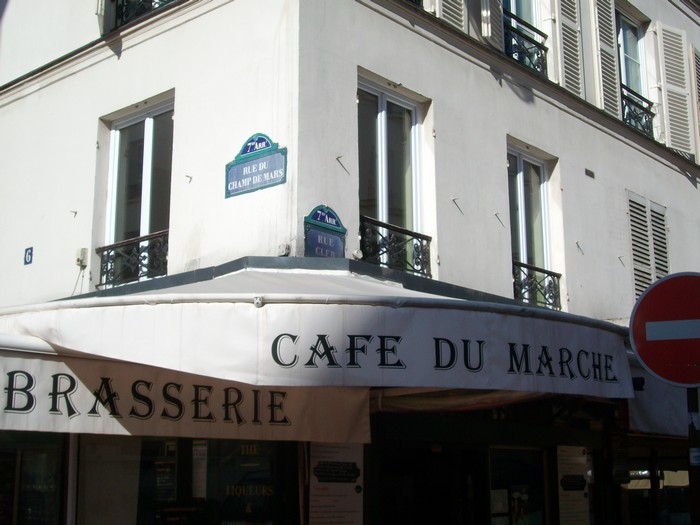 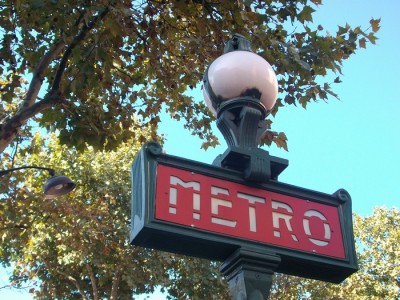 After breakfast a quick trip through the supermarket for some water and we were off to look at the rest of the street. So it is more of a pedestrian shopping street than a real open air market bustling with stalls packed along the side, but really a pleasant walk anyway. A clothing store could be across from a restaurant grilling chicken outside and a bookstore nestled against a chocolate place displaying their wares in the window.

One end is very close to the Ecole Militare metro stop, which is how we got there. The other end is a leisurely stroll toward the Champ de Mars and the Eiffel Tower through windy streets. The area is over all quite charming and had for me a nice Parisian feeling. It doesn’t feel quite as touristy as other places we wandered around that day. Though being so close to the sights, it is not as local feeling as out near the apartment we stayed in.

In the end, Rue Cler is not the open air local’s market I was expecting, but still worth a walk through. Especially if you have a week or so to spend in Paris, take a morning to walk this street. 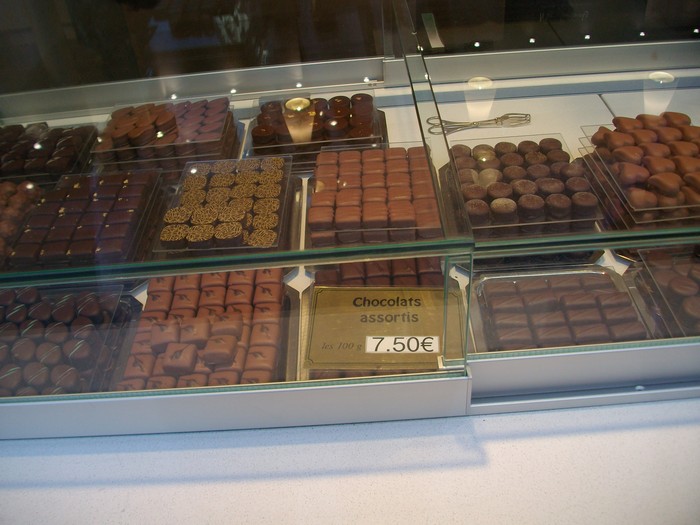 German Travelers are Everywhere Drink it Down