Any long term Expat is going to miss certain foods after a while. Foods you grow up with are pretty deeply ingrained in the memory and often when the expat life gets overwhelming, we just crave certain things from our home country. This is normal and I definitely enjoyed being back in the US last year to go shopping. However I often get asked what foods we just can’t find here. We can find most everything in some form, the problem is the lack of choice.

Germany is a country of pork. If it isn’t labeled as one thing or another, assume the meat is pork (schwein). Next in popularity is beef followed by turkey then chicken. The order in the US is more chicken, beef, turkey and then pork. If you want a big slab of meat or even chunks for stew that is fairly easy to find in any of those types. Though your selection shrinks as you go down the chain. Anything is available in pork, but only two cuts of chicken show up in our store. Salami or other types of sausage, yup, no problem. If you are looking for cold cuts, well….

Ham is prevalent. There are indeed several words for it in German depending on the part of the pig and curing method. For something akin to sliced turkey breast for piling on a sandwich, look in the plastic packages and not the deli counter. Also expect the packages to be small and comparatively expensive. Germany is not the land of the meaty sandwich. Roast beef? If you are really lucky and don’t mind it pretty rare. 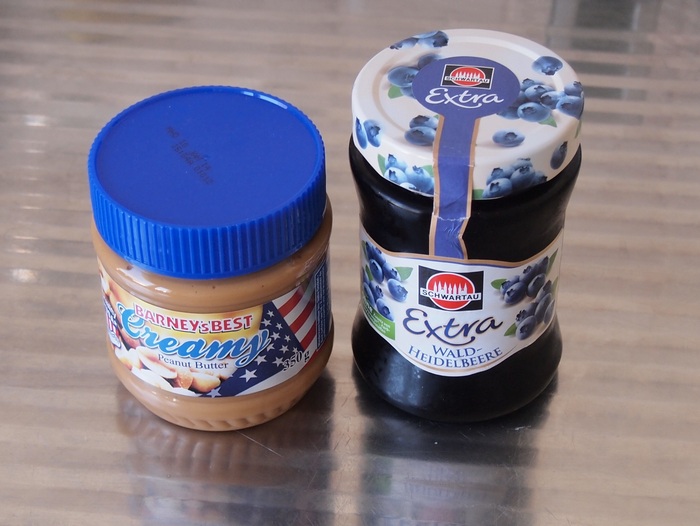 Jelly, jam or preserves, however you want to call it, we definitely have plenty of it in Germany. Jam on bread is a breakfast staple. There is even pretty good selection of it. In our market, there is several brands and a number of flavors. The issue is that the flavors to an American mindset may look weird. Current (Johannesbeere in German) in both red and black is pervasive. Plum and apricot are very common as well. What we haven’t found is grape. The standard PB&J of grape jelly is no where we have looked. We have even asked around and most people seem to think it is weird. This is including several Australians.

I’ve seen grape juice although not as common as back in the States. I even buy table grapes for eating, but as of yet no jam. Perhaps with so much wine being produced grapes are not really thought of as something you would preserve as jelly. Is grape jelly just an American thing?

Peanut butter is one that has gotten better. When I first started traveling here over 10 years ago, the only brand was an organic salty gritty kind. Now there is a brand that has both a chunky and a creamy kind and shows up in most stores. This is real progress, but a far cry from 60 different choices in the average US market.

Talk about choice in the States, everything comes in a normal and a lite (yes, often spelled like that) version. Low sodium soup and reduced fat butter. No fat cookies and no calorie sugar. Germans are not into that so much. I would think it is partially a desire to not have so many chemicals and want to know what ingredients are in things.

Maybe it is also tradition. You make things properly in the old way and balance it with lots of fresh ingredients. Maybe they just don’t feel the need to be able to eat anything they want. Though I do miss the lowfat cookies. Sure I know the fat is replaced with sugar, but still…

A lot of things I remember from the US that I miss here are packaged things. Pop tarts and frozen toaster waffles. Ready made freezer meals and boxes of mac and cheese with powdered cheese (just add butter and milk). We can get some prepared sauces, even some brands from abroad, but again the selection isn’t very good. Ditto on salad dressing.

The up side is that most of those things are not so healthy. The balance of not having so many prepared foods is having access to a lot more fresh options.  So I have to make different (hopefully better) choices here. An example of this is the lack of canned pumpkin (a Thanksgiving stable), so I have had several pies made by friends over the years from fresh pumpkin. 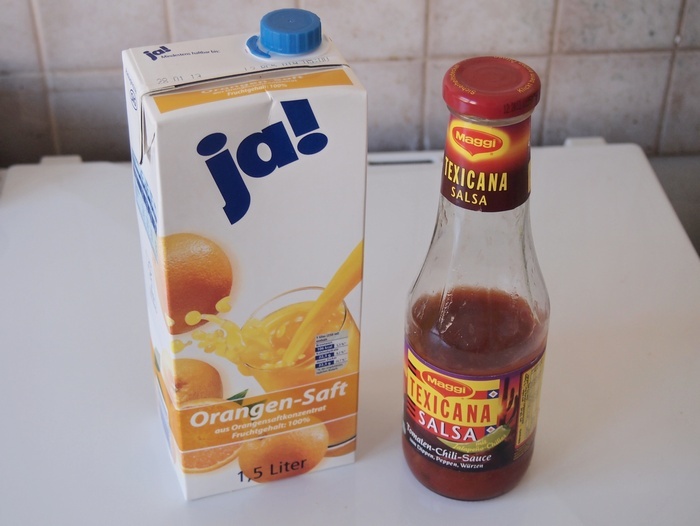 A big limiter to choice here seems to be space. The population density is higher and grocery stores are much smaller than their American counterparts. So things get stocked differently. Add to that different tastes and a desire to buy local (or at least German), the choice is small compared to the mega stores back home. There is almost nothing I have not be able to find in one form or another here. From an eating out point of view though there is a lack of good Mexican and of New York Style Pizza around.

I have lived over four years in Freiburg, which although a city is not an enormous one. I would assume better selection in bigger cities and less so in villages.

There certainly are a few specific food types that I have not seen at all here. Maybe in the bigger cities I would have better luck, especially near American Army bases, but here I haven’t seen them. Things like..

How to deal with it?

This is my entry for this month’s Blogger Stammtisch with the theme of Foodpicked by Tiffany of No Ordinary Homestead. Read more entries for this month here. We post a different theme on the 15th of each month. Next month is Drink.

Places to Eat in Freiburg, Germany My Goofy 7 Super Shots