Feldberg – Top of the Black Forest

Feldberg is the tallest mountain the Black Forest, and only an hour and fifteen minutes from Freiburg. It is also a well known local ski area. Buses run from Titisee as well as from Feldberg-Bärental train station, the highest in Germany. Years ago as a student, I braved the frosty January air to climb the mountain. I like trains and wanted to see the highest station, so that is the route I took.

Bärental Station is at 967 meters high and the Deutsch Bahn site shows the Feldberg “basecamp” to be 1250 meters. The peak of Feldberg is nearly 1500 meters above sea level. This isn’t quite mile high, but still enough to have your ears pop and feel the temperature drop as I get out of town and head up. Feldberg translates out of the German to Field-Mountain, which seems odd. I wasn’t sure what to expect.

It doesn’t snow so much down in Freiburg. Away from sunny flats along the Rhine, up in the forested hills, it snows. A lot! There is a good reason this is a skiers area. Though many of my friends that grew up around here don’t think much of Feldberg as a skiing area. There are other hills that are less crowded, but the “highest in Black Forest” label draws the crowds as it drew me.

I don’t ski. I tried it in high school and don’t like it. I keep getting hit by the mountain and snow gets into places that snow should not be. I imagine if you grew up with it, that would be different than a gangly very uncertain 16 year old trying to balance on skies for the first time. Oh well. I still wanted to see what Feldberg has to offer so I wrapped myself up and walked out into the cold. 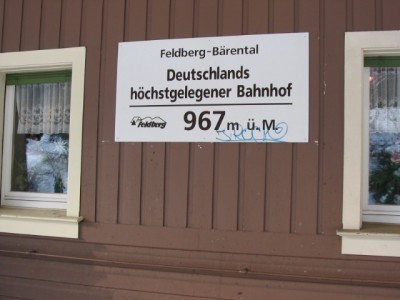 The regional train leaves Freiburg at ten after the hour. A little over 45 minutes later after passing through Titisee, the train stops at Feldberg-Bärental. Bärental translated to Bear Valley and is a group of houses near the station.

A bus leaves every half an hour for the 10 minute ride up the base of Feldberg. Feldberg is in region 3 of the RVF transport network, so with my student transport card I was able to get up there for free.

If you are just interested in the mountain and not the highest station, the Deutsche Bahn site shows bus connections direct from Titisee.

[*] – Times checked at time of writing. Check the schedules when you are buying tickets.

My Misadventurous Walk to the Top

The bus drops off near a basecamp of sorts with a parking lot and a museum for nature in the Black Forest. I started on a path that seemed nice and walkable following a row of sticks up. Either the sticks stopped meaning what I thought they meant or I more likely I missed a sign and took a wrong turn because I ended up walking up the ski slope. This was a bit frightening to see skiers coming down at me. Thankfully everyone avoided me and I made it to the top and down again without a problem. I did see a chair lift off to one side so it really is a ski slope, not a walking path. At least in winter anyway, I imagine there is a summer hiking path there.

There and Back Again

The bulk of the mountain is not forested, which perhaps why it was named Feldberg, “Field-Mountain”. The top of Feldberg has a tower and the views are what you would expect for the tallest mountain in the area. At this point, exposed on the top of the mountain, I was COLD. So I reversed my trek to head straight from the Freiburg train station to the Irish pub to warm up. I really should do more travels around Freiburg, but given that it is still winter here, I’ll wait until it warms up again. 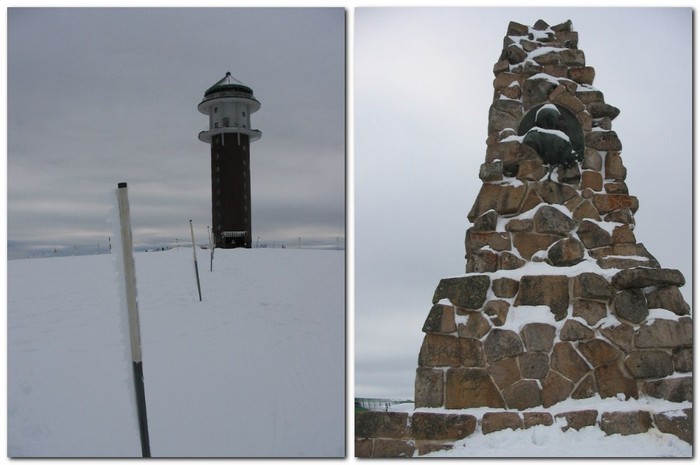