One Day in Hong Kong

I had a list. I was ready. I had a day to see as much of the city as I could manage. Which in the end was less than I expected as I hadn’t slept on the flight.

Hong Kong Airport is a nice place and is connected to the city with a train. I knew I wanted to take a Junk tour and to book it I needed to be on Kowloon. So I booked a round trip ticket from the airport to there. Buying at the kiosk in the airport it cost me 90HKD for the round trip. Oddly, this is the same as a one-way. Not bad considering that is about 9 euros.

From Kowloon Metro stop there is a free hotel transfer bus that dropped me at the Marco Polo Hotel near the waterfront. I only know this due to the incredibly helpful tourist woman in the airport. So happy I stopped there. Then I was able to walk around the Kowloon waterfront for a while enjoying the sun. Even though it is still northern hemisphere and technically winter, it was so nice and warm.

The central pier where the tourist office was for my Junk tour is also where the Star Ferries run. These are the ferries that run between Kowloon and Hong Kong island. This was a great experience for me. I rode it twice on my day in the city and loved it. First, tickets are 2.50HKD, so about 25Eurocents or 40US cents. Seriously!! For public transport and  great view this is totally worth it. A note here though, have change. I had to run back and buy a drink to break down the bills from the ATM for coins to put into the machine. You buy a green token in a machine and then put that in the turn styles to get into the loading area. 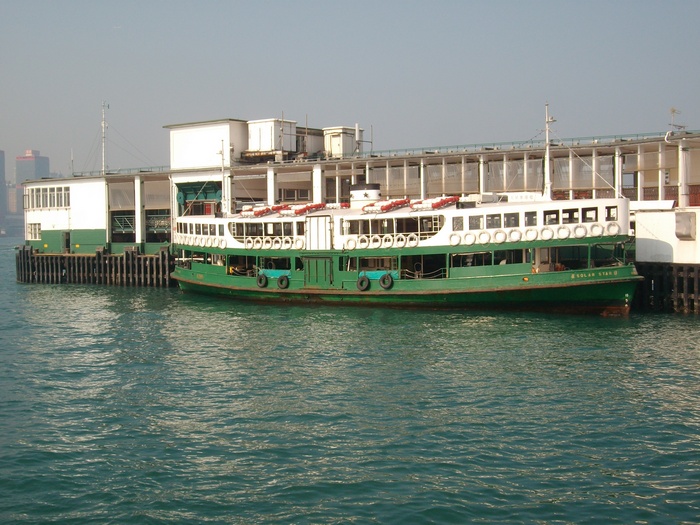 Check. I put out a few calls on Twitter for other people in Hong Kong at the same time as me. I knew I would be tired and it would be great to have people to help me stay up and see things. I met up with Connie Hum for an excellent Dim Sum lunch. She even ordered for us in Chinese. Which was good as at that point I was hungry and didn’t know what anything was. My favorite was the soft sweet egg cake. It looks like a brownie but isn’t. Tasty. Connie and I also walked around through the massive warren of malls hunting for a for a coffee before she headed off to work.

I did some research and found that the Hong Kong tourist board runs Junk tours on a restored fishing junk. This was top on my list to do as I love sailboats. It meant booking in the tourist office before hand on Kowloon side to pay my 100HKD in cash. A bit more expensive than the other tours I saw advertised, but way worth it.

The boat is called the Duk Ling. I have no clue if it is meant to be a joke of Duckling, but I liked it. Cold out on the water though. I was glad to have my sweatshirt.

Another big thumbs up for finding new friends on Twitter. I caught up with several other travel bloggers for dinner. (Juno, Steve and Nicole ) We went to a noodle house in the mid-level and had some great food and company. At this point, I was beginning to fade and needed to head back out to the airport for my flight to Auckland. I had on my list during the afternoon to see the mid-level escalators. Come on. Outdoor escalators? Gotta see that. They run both down for morning rush hour and then both ways the rest of the day. I had missed out on it during the day, so was happy to see them on our way to the subway.

The day was fun but a bit rough. I was dead tired. I had hoped to make it to Victoria peak, but that wasn’t happening. I did get to the cable car bottom and fell asleep standing in line. I decided to not spend money on it as I was unlikely to stay awake enough to enjoy it and didn’t want to miss my Junk tour. So I walked back down to the pier and napped at the outdoor tables there. Victoria peak is now high on my list for the return journey.

I also had some issues with my camera. The chip got corrupted. I thought I lost all of my morning pictures, but was able to salvage most but not all of them. Oh well, another reason to come back.

The main point of the trip to New Zealand was to see and travel with Ali. Despite which I was really looking forward to Hong Kong. This was my first trip to Asia and it was an additional carrot for getting on the long flight. The ticket was a bit more(Cathay Pacific is nice, but not necessarily cheap), but totally worth it. I am ready to go back and see more of the city. I liked my day in Hong Kong. Look for some more detailed posts coming.