I remember traveling in Europe pre-euro. (It’s only been around 10 years, I’m not that old. Ok, maybe I am but still it’s not that long ago.) In that day and age every border meant a new currency with a new name and exchange rate and bills and coins. Post Euro in Europe is easier, but still there are tons of travel destinations with their own money. It gets overwhelming in a few different ways.

Every currency has a name, right? Most are easy enough. Dollar is popular and I have seen various Lira, Peso and Francs. Between different languages pronouncing them differently and words I can’t even say or just plain forgetting, I get fed up sometimes and just start calling them “Thingies“. This has been a great amusement to my wife, when I ask how many Thingies does something cost where she is on her trip.

I get used to the local name after a few weeks, but I still can’t seem to pronounce them all correctly. Take even the standard Euro. Every language has a slightly different way of saying it. Ay-u-rro in Spanish. Oy-ro in German. It’s not even written with the same letters in Greek. Add the rolling Rs and odd vowels in other languages I can’t make, Thingies is just easier. And really if I am traveling for a few weeks through different countries, there are sometimes too many to keep track of. I’m lucky if I pull the right one out of my wallet.

If you ever travel outside of your home currency you know about exchange rates. They are quite often a bane to travelers in that they are never round numbers and shift daily (through Murphy’s Law always against you). Most of us still think of how expensive something is in the currency that we have our savings and earnings (US Thingies for many and European Thingies for me), so the conversion back to your home currency is important.

Based on use in daily life, the most awesome thing I ever learned in High School Physics (thanks Mr Green) was approximations. We did complex calculations for months without a calculator and the point was to get close not exact. It was then an aspect of sanity checking sciency numbers, but helps for currency too.

I try to reduce things to round numbers. 32.56 Thingies to the Dollar, then use 33.33. Wait, this isn’t a round number is it? Sure it kind of is, it lets you divide things by 3 and multiply by 100. So that 100 Thingies is about 3 dollars. The point is to get to simple math. 7.5 Thingies to the dollar? Do both 5 and 10 and guess the halfway point. Most of us (hopefully) remember the basic multiplication tables, so the point is reducing the big fancy ever shifting numbers to simple 1st grade math.

Currency Overload – All the Pretty Coins 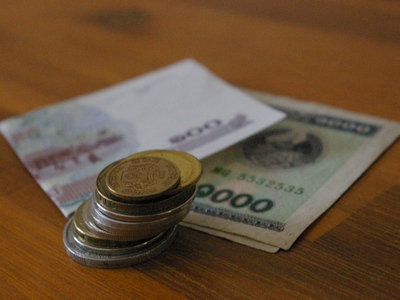 So once you know that the ATM that just spit out 80million local Thingies equates to about 20 Dollars back home, how do you deal with pile of bills in your hand. First I like to look at the big wad of bills and think of myself as a millionaire (it helps soften the blow of checking the bank statement after weeks of travel.) I do however try to restrain the villain laughter, especially while still at the bank. When I have recovered from that fit, I look at what kind of bills I have and try to memorize the denominations and shapes/colors/portraits of people I don’t know. This helps to reduce the embarrassment of just handing a shop keeper a wad of cash hoping to get the proper change back.

This is not as easy as it sounds in some respects. Even after 4 years of living with the Euros, I still find myself turning over the coins to read numbers at the super market. I love coins despite the weight and enjoy currencies with lots of them. I do however like to see coins that are all different. British Pounds for example have a great diversity of coins that are fun to play with. New Zealand was good too. The one dollar coin there has a kiwi bird on it and the smaller denominations various Maori art.

In the end, the trick seems to be memorization and reading of the coins and bills. I will “get” the Euro coins eventually. Thankfully except for the US Dollar, most bill systems that I have seen are colorful and easy to recognize. The Euros are even sorted by size with the 5Euro note being much smaller than the 10Euro which is smaller than the 20Euro and so on.

To much money is almost never a problem for travelers. Though for me to many money’s can be. This may be another nail in the coffin of me becoming an eternal nomad. Moving around so much I would just get lost in the different monies. Staying for a few weeks or months in a place gives me a change to learn the local Thingies and all those pictures of people I don’t know.

Post supported by Travelex currency services. Remember to buy foreign currency before you leave. With Travelex you can order your money online and pick up in-store before you set off.

The Beautiful German Language One Day in Hong Kong