Hot Spa in a Cold Town

Sinking slowly into the hot water, I closed my eyes and let the cares of the day float away. It is so nice to have the thermal spas so close to Freiburg. Just a short ride out from town and in under 30 minutes from my desk I can be soaking in bathwater temperature mineral water. Especially since it has started to get darker and colder, I have made coming to the thermal baths my relaxation outing of choice.

Freiburg is in an area called Baden, in the south west corner of Germany. Baden is the German word for baths and there are plenty around. A number of the towns in this area are named for baths as well. Bad Krozingen, Baden-Baden, Badenweiler are all in his area. Many of these baths have been around in on form or another since Roman times. I remember reading plaques at a museum in Baden Baden that the soldiers were sent here to recover. This is the extreme upper edge of Rome at that time, so I have a hard time believing that they came up from other parts of the empire. Maybe I was mistranslating (it was years ago) and they just meant the border guards. Anyway, the waters of these baths are quite old.

Keidelbad (Kye-del-bad) is inside the city limits of Freiburg and reachable with a tram (number 3 to Haid) and a bus (number 35 “Keidelbad”) from town. The bus runs every half and hour and drops in front of the entrance. I can get from the center of town out there in under 30 minutes. This has become my bath of choice. They have just finished renovating it and thus have added a higher price to the shiny new pools. At 13,50euro entrance plus 4euros if you have to rent a towel, it is not really in a tight backpacker budget, but is a nice thing to do every so often.

Kur(and Kurgebiet) is a word in German for “Cure”. A Kurgebiet is a Kur Area or spa town.  I am told that it is quite common for a doctor to proscribe a Kur. Which involves staying for weeks in one of these areas in a hotel relaxing. In some of these thermal bath areas, there are hotels and restaurants spread among the grounds. Vita Classica in Bad Krozingen is only 10 minutes by local train from the main station in Freiburg and has a large complex of spas and baths that form one such area. I have never taken Kur, but it doesn’t sound so bad.

So I take my mini-Kur every few weeks for an evening and relax in the waters like the Romans several thousand years before me. 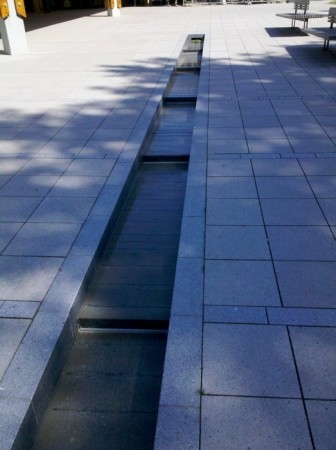 The water is a mineral water, but not fizzy or smelly. I can feel that it isn’t pure when I shower off afterward, but while I am in it it all feels nice. The pools range from 28C(82F) to 40C(104F) with the larger pools all kept around 36C (97F). There is a large indoor pool with moving water. This is where I usually start. It is bathwater warm and relaxing. The center of the inside area is a set of smaller pools that vary between the coolest and the hottest, nicely color coded blue to red as well. The hottest at 40C is actually quite difficult to get into at first. It feels almost scalding. I actually think I sweat while IN the water there. It does however warm you up and relax out some muscles. The other two tubs allow you to move around between the temperatures. I imagine there is some regimen to in which order you do the temperatures, yet I just move as the desire hits me.

The pool where I spend the most time is the outdoor pool. This is a very large pool and has a small indoor extension so you don’t have to walk around in the cold out of the warm water. There are several areas of seats that bubble and an area of moving water to push you around in a circle. Several little jets and water falls are spread around as well. Since I have mainly gone at night in the winter, the water steams into the night air. They have planted palm trees all around and with the soft blue lights from the pool it really does feel otherworldly. Walking up to the entrance even, the steam is visible wafting up from the pool.

I like being out there looking up into the trees. It feels far from even the minimal bustle of Freiburg and sparks creativity along with relaxation. The steam clouds keep the air right near the water warm enough that even on a very cold night I don’t worry about getting cold. Although I do notice quickly if my nose or ears get wet and the steam blows away from a moment. While this is what Keidelbad has in the way of pools, the other thermal bath that I visit in the area is quite similar.

Germans are not shy about their bodies as a rule. Saunas are usually nude, which is why I don’t ever go on that side of Keidelbad. Speedos are still common swimwear and the German stereotypical large beer belly is equally common. This all makes for at least interesting people watching: from the fuzzy big belly guy to the bikini-clad women.

The people here run the gamut from families with their babies to teenagers to older people, although the older set does predominate. Especially in the hottest pool they seem to enjoy stewing. Sitting slumped down to immerse everything but their head in the steamy water and chatting away about whatever topic to their friends. There is a sense of cultural immersion in this as well. I have seen young parents swirling their tiny babies in the water. There are always a few young couples about often making out in one corner or another of the outdoor pool. So no matter who you are, this seems to be a thing to do.

ABCs of Travel Seattle Pike’s Market Other Than Fish