The Best Gifts are Memories

I am not sure if this is a coined phrase yet or not, if not then I claim it. “The best gifts are memories.”  This is true of the physical stuff as well as the experiential stuff. A cold gift has no memories attached. A meaningful gift is one where someone knows you well enough to give something that taps into your happy memories, often together. Travel is often about shared memories and any trinkets I bring home remind me of that trip and the cool things I did and saw. Even a physical gift when endowed with memories is a great gift.

I have written about souvenirs before and tend to avoid them. I try to take so many photographs as they remind me the most of a trip. As I claim the best gifts are memories, here is a look at the gifts in memory from that Italy has given me over the years. 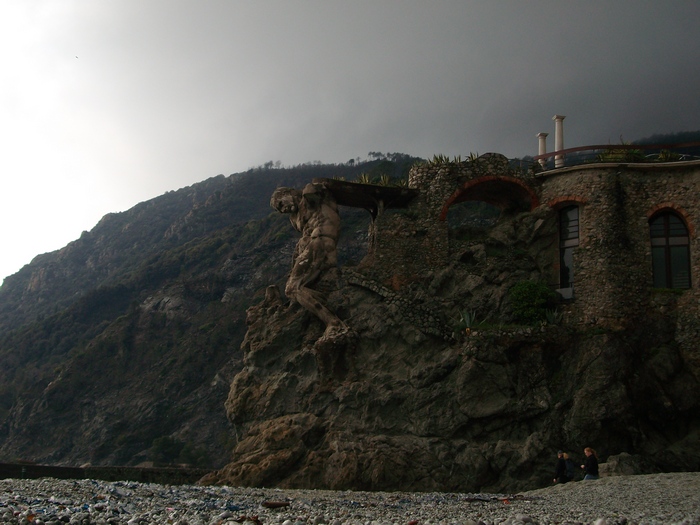 The very first time I was in Italy was on a summer abroad program in Germany. We took the night train down to the beach and stayed here for a few days. So many memories from that trip. I decided last minute to go with them so ended up in the seats of the night train. Soccer teams and Italians during the night. I remember walking the streets with my friends and seeing lemon trees. This is also the trip where I learned that marinara in Italian means fish based, not just red sauce like in the US. I remember this statue and took a picture again when I went back last year with my parents. 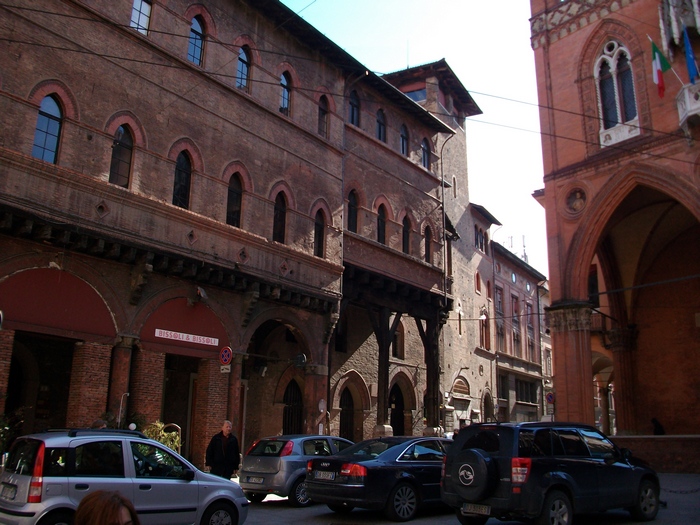 Bologna began to reawaken my love of Italy. I spent two separate weeks there learning Italian at a language school. So many great people were met there. Most I don’t have much contact with anymore, but at that time the conversations really helped me shape myself as I was coming to deal with being an expat. I also really adore Bologna. I have been back through a few times to visit one friend or another. This picture is a small square that I walked through a dozen times in the week. On the left is a great appertivo place and the arches to the right is where I sat and read in the shade for hours one day. 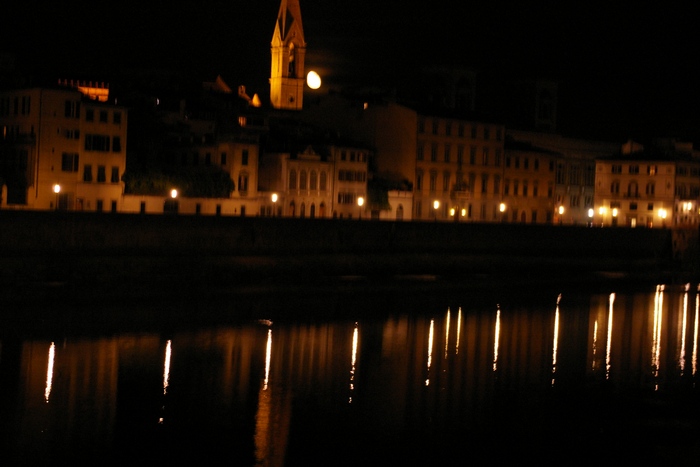 On my first trip to Bologna, I made some great friends and the 3 of us did a weekend trip to Florence. This picture is my attempt to show that even strange things can be a gift with good memories. This was taken as we were coming back from dinner. A place that one of the ladies remembered going too years before. The walk out was beautiful and the place was small and cozy. We thought we knew our Italian food. So we ordered Bruscetta Toscana thinking it was tomatoes on top of bread. Nope, liver. I ate half a piece and decided to do no more. The great part of this story is that the next night, I was taking a night train home and ended up in a compartment with a Swiss couple that remembered me. They were in the same restaurant and laughing at us trying to eat pate bread.

Want to learn more about Italian food? Check out how to choose the best cooking class in Florence. 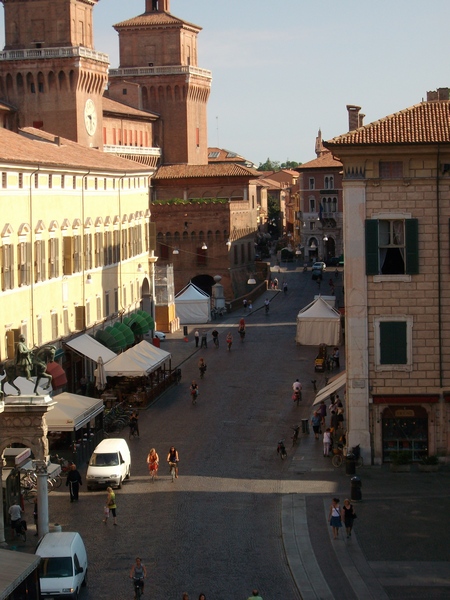 I play a lot of online games. In Europe, often the servers are mixed language. One year I made a number of online friends in Italy. I was practicing my Italian typing and could follow a lot of the written conversation. So as I was planning a trip to Croatia on the train, it happened they were all meeting in Ferrara. The timing fit and I joined them in Ferrara during the Busker Festival. So many memories of chatting in broken Italian with friends I knew mostly online in the shade on a piazza. Something so totally Roman feeling. And the busker festival was awesome. Warm nights and crazy music from everywhere. The best was a guy “playing” a carrot like a flute. 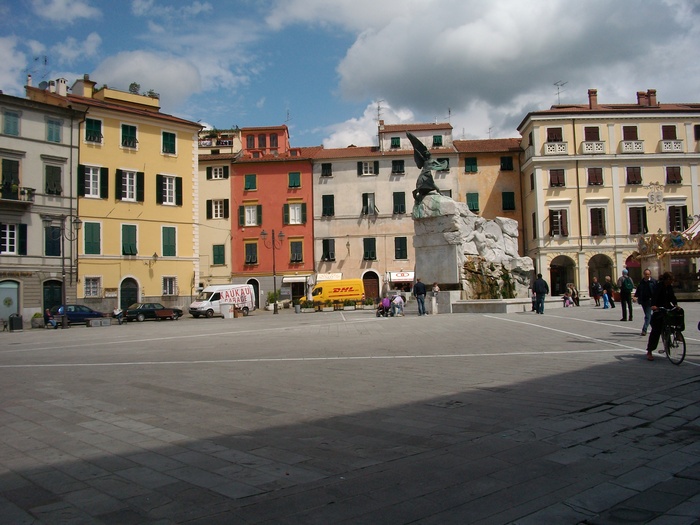 My parents came to visit and I convinced them that Italy is much nicer than Germany weather wise in March. We went down to La Spezia and spent a week around the area. On a day trip to Sarzana it was hot. Dad wanted to climb up to a castle and this my mother and I sat in this square and talked. The longest we had done so since I left for Germany. So this picture reminds me of a deeper connection with my mom. 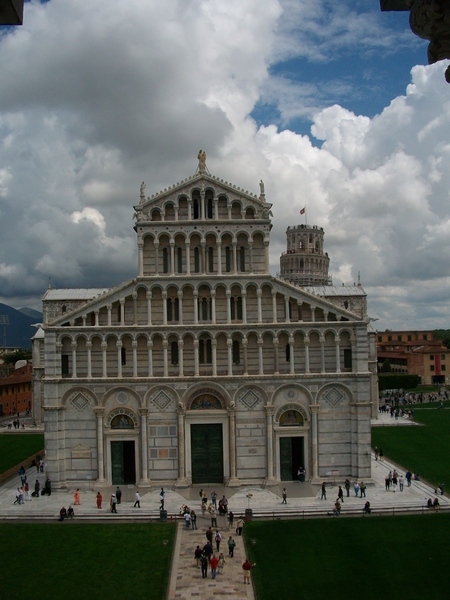 From the Baptistry, Pisa, Italy.

Same trip with my parents we decided that Pisa was reachable as a day trip. So we went out to see the famous tower. Despite the fairly expensive ticket (which Dad paid for, thanks) we decided to climb the tower. This is a touristy thing, but a great memory. Especially when my dad talks about growing up on a farm and never even contemplating seeing such a thing. That was cool to be able to help my parents feel comfortable traveling in Italy and seeing these things. This picture reminds me of my Dad and getting to show him why I like traveling.

So Italy has given me memories. Memories of friends and family and times spent with people that I care about.

And now as an idea to give back: Cinque Terre (where several of these memories come from) was ravaged by rain earlier this year. I know of these two sites taking donations to help rebuild.
http://www.rebuildmonterosso.com/
http://savevernazza.com/

I post this as a part of the Italy Roundtable December Theme of Gifts and Italy.
You can read their posts on the theme of gifts starting on the 14th of December.
ArtTrav
At Home in Tuscany
Brigolante
Italofile
WhyGo Italy

If you are still not round-tabled out, the December topic of the Expat German Roundtable that I help organize was Locals.