Is it really Expats versus Locals?

Many travel guides and blogs talk about getting to know the locals when you travel. As a expat though, it makes me rethink where is the line between an expat and a local. I like to feel what it would be like to live in a place. I like that the guy at the little breakfast bar notices when we don’t come around or that a waitress knows our order after only a few days. This is that sense of “home away from home” that I enjoy. Connections with locals can make you feel like you belong even when you obviously don’t. 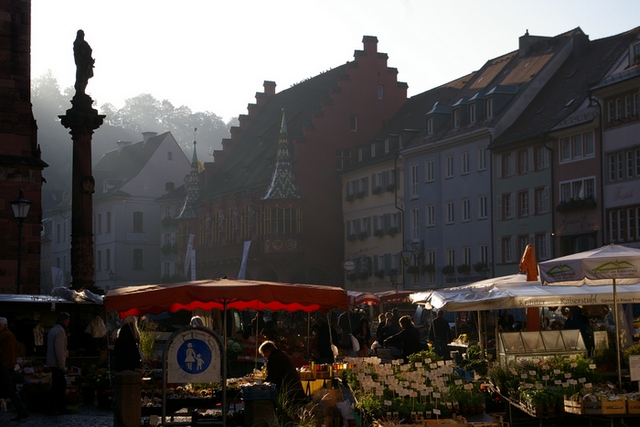 Locals, Natives and Travelers, oh my.

I was on the tram just this weekend helping an older woman with her walker onto the tram. We started talking and when I mentioned that I have been living here 4 years, she responded with “well then you are well settled then.” It loses a bit in the translation, but I take that to mean that I am at least an honorary local. Maybe it helps being in a university city. With students coming and going all the time anyone that stays longer is a local. I certainly know the old town here very well. As a long term expat in Germany, I am not a traveler here. I sort my trash and pay my taxes. I am not a native either. I don’t necessarily feel like an outsider, does that make me a local?

Depending on how wide a net you want to throw (just your town or region or the whole country) the label of native is fairly clear. (Yes yes, there are people that grew up all over the place so don’t really fit anywhere. They are wonderful to talk to but disturb my tidy little picture here, so out they go.) Travelers are also fairly clear. These are people that for one reason or another are only around for a short amount of time. A day, a week, perhaps even a semester. This leaves the local.

They know where the best food is and what bar to avoid on Tuesday because of the grumpy bartender. They have a history in the place and often great stories. Think the amateur tour guide that points out the quirky gargoyle with his ass hanging out on the church and talks about walking home at 2am from the best party over there. For me a true local also knows people. They know who to take a bike to get fixed. A location is not just the physical but also the humanity that inhabit it. A local is then someone with a connection to the place. This can be natives with long history or like me an expat of four years.

As an expat we often want to integrate to one degree or another. We want to feel like home, if for no other reason than it makes it easier and more fun to live in a place. I would argue that the closer you get to being and acting (honestly) like a local the closer to that integrated state you are.

Talking to people is pretty much the only way to get to know them.  In the world of cell phones and head phones and automated everything, people always seem to be interested in connections. It is so easy to go through a day and not have to talk to anyone. It doesn’t take much to get a lot of people to open up. Weather is a unifying topic in nearly every culture I have been in. “Cold/wet/hot out there” has started a large number of conversations. Most of them come to nothing, but for me those tiny human contacts in a new city help me feel that I am welcomed even if I don’t technically belong. I also like talking to bartenders, as “beer” is a pretty easy word to pick up in any language.

Think you can’t do this kind of thing with a language barrier? At least in Germany most people speak some English. Though if you start out with one canned phrase in German, then open up that you don’t speak much, I have seen conversations last a while. I talked to a guy on a tram for 10 minutes about how weird it was that Americans don’t normally speak German. I am also on the look out for other English speakers. “What a lovely accent” is a great starter there.

Even individual incidents of talk can be strung together with…

If the goal is to get to know people, then talking is the way to do that (see above). However language and culture barriers often stand in the way. If you don’t know someone it is really hard to start up a conversation. Routine is one of the ways that I find is actually an icebreaker. Going into the same store every week or ordering the same thing in your (new) favorite restaurant can go a long way to breaking the ice to talking to people. The routine itself can be a talking point.

This is my prime way of building a sense of community. I go to the same pasta place for lunch a few times a week. They are from Naples (not German) and I try my basic Italian every so often.  I have gone to Burger King often enough that one of the ladies knows my order and gives me a small discount. I haven’t been in a long while, but at one point last year I was buying dried nuts at the market and chatting to the woman who ran the stand. I’ve been going to the same Irish Pub on and off for nearly 10 years across several trips to Freiburg. Of course I know the woman who runs it by her first name.

You don’t have to live in a place long for people to recognize you. Studying in Bologna the man at the coffee bar knew us after only a few days. Don’t have favorite places, or not getting good “localness vibes” from your current ones, branch out and …

This is the one that I kind of fail on. I know the center of Freiburg very well. Nearly all the nooks and crannies of the area that I tramp every day. I only rarely venture outside of this area. I totally need to though. Exploring is my favorite part of travel. I like walking around and poking my nose into new little places. By being an explorer in your new expat home, you can increase the number of people you meet to talk to. Finding new little stores and parks is also a great way to be able to “know stuff” as a local.

Travel guides often have a section of “local’s tips”. These are often then overrun by travelers, but still. It is nice to be able to take visiting friends to your favorite little hole in the wall that noone would know of unless they lived here.

All of this builds together as a sense of community. This is the humanity aspect I like. None of this is necessarily specific to the expat life. Finding the sense of local-ness and belonging can be good for travelers and for people living in their native culture too. I am a firm believer that although the Net has enabled us to meet people all over the world, we still enjoy local connections. As much as I love skype and my own comfy chair at home, there is something invigorating to me about meeting a friend for dinner face to face.

The building of a sense of community helps you enjoy your knowledge of place as well expand it. If you are going to live some place, you might as well get to know it.

Read more about interactions between locals and expats here in the December German Bloggers Roundtable: