Nun Farts and Drinking Before Noon

Christmas Market posts are going to be popping up around the web for the next month. Europe is full of the markets and they are indeed pretty cool. Germany seems to be the center of the Christmas Market season and Freiburg is no different. Food and drink are central so here are local highlights.

A dreary Saturday morning I had an errand in town that I had to get done before the place closed at 1pm. I had seen a few things a few nights before that I wanted to look at more closely. Prime among them were Nonnenfürzle. 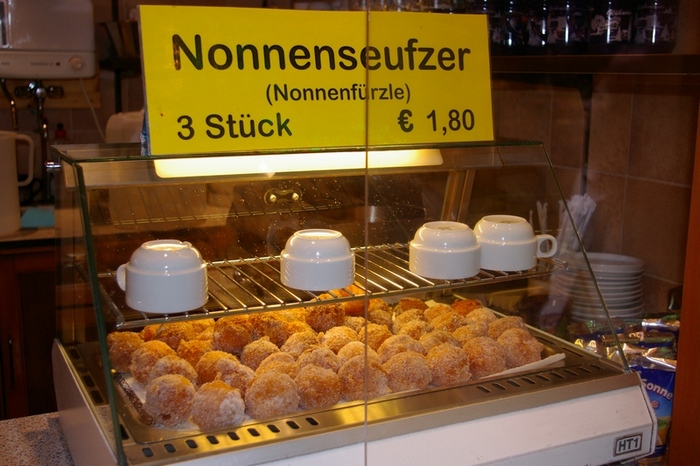 I had seen these balls at Fasching time before and had heard a translation of Gassy Nuns for Nonnenfürzle. Furze are farts, so this somehow makes sense as Nun Farts. I asked the woman at the stall in our market about the name. I got the “it’s a long story about a nun.” Not really so helpful.  Though a little bit of reading[*] in the web says that although the name is quite funny in modern German it comes from an older word that means something to the effect of best made by a nun. The second word on the sign here is Nonnenseufzer which translates to Nun Sighs. This would imply, at least to me, that the idea of these being Nun Farts is not a trick of the non-native German speaker mind and calling them Nun Sighs being a more polite form.

This little balls seem to be Schwäbisch in origin, though definitely a south western thing. They are apparently more common the closer to Fastnacht (party before Lent, like Mardi Gras) it gets. I know I have seen similar things in the bakeries as cream-cheese balls (Quarkbällchen) in the spring as well. Unsure if they are related

They are in essence a donut style dough that is fried as a ball and covered in sugar. These at our market had a filling of apple sauce which was really nice. I didn’t see fillings mentioned in too much of the online searches I did, though one mention of a cherry in the middle did sound nice.

For Americans, think perhaps a quite large donut hole that is lighter and served warm coated in sugar. They are bigger than a golf ball and served (at least at this stand) three for 1Euro 80 in a paper bag. 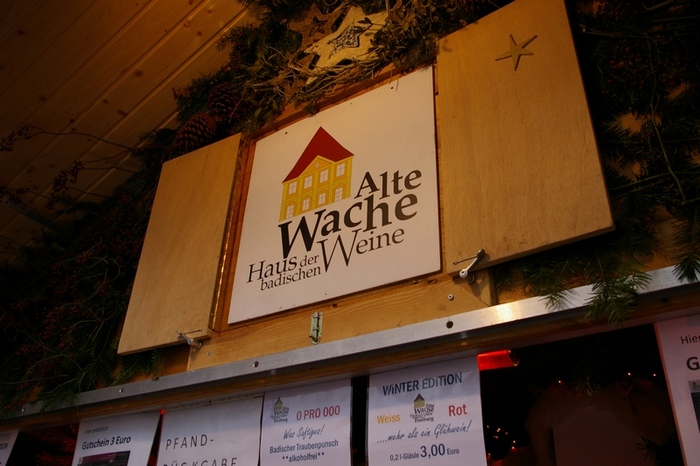 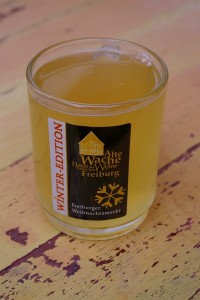 In addition to tasty treats, Christmas markets are well known for the mulled wein called Glühwein. It is nearly impossible to go to one without a mug of the steaming aromatic wine, the smell of which permeates the entire area of a market.

It is so common to meet friends for a Glühwein in the dark evenings after work that I just associate it with a nighttime thing. Partly because I have mainly experienced it that way and partly the American training that drinking before noon is a bad thing. The Germans however have none of this sillyness and there were plenty of people out before noon enjoying a steaming cup of wine.

I decided to wander the markets and found a stand run by the House of Badische Wine. A cup of white glühwein cost me 3 Euros and 2 for the deposit on their specific glasses. So in the hours before noon, there I was in Germany, drinking. What a neat life.  Though I did find that gassy nuns being mostly sugar and fat the wine went to my head faster than I expected.

So, yeah. It’s Christmas time. Forget packed malls and hours of searching for a parking place, think crowded markets where everyone has a mug of steaming wine regardless of what time of the day it is. It’s gray skies and snow flurries and fried things with sugar.  It’s a Christmas Market in Germany.

Traveling with Books Is it really Expats versus Locals?