One of the things I think most Europeans who have never been have a hard time to grasp are the distances involved in getting places in the US. Highways are everywhere and you need a car to get just about anywhere. An hour commute to work is standard and due to traffic this could mean 40 miles or only 10. Just going to the nearest grocery store is often a mile or two. Going back this summer I was able to see the driving experience with new eyes. 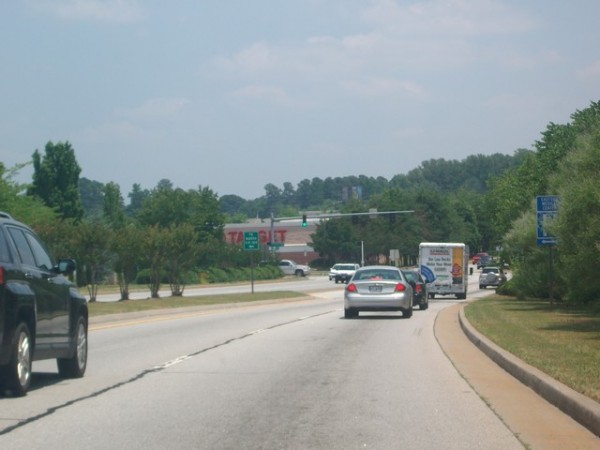 Getting anywhere involves lots of cars

I had not driven a car for three and a half years before going back to the US in June. Germany has such wonderful public transport that I don’t need to drive. I ride my bike, walk and use trains here. So being on the road, even if I wasn’t driving, was a fascinating experience. It was also frightening enough to remember why I didn’t like driving. All of these cars whizzing about. Though without needing to pay attention to the traffic, I did have a grand time looking at the stuff about.

The sights along the highway are equally unusual compared to the standard sights from a speeding train. Newly paved parking lots huddle around shiny new buildings nestled in plots of dirt as all of the trees have  been removed. Fast food places in row. Each one offering their own version of greasy delights.

The concept of space is so much different in the US versus Europe. Stores peer at each other across acres of paved parking lots. A store without a parking lot would go out of business on a highway. Everyone has cars and the only way to get places is these cars. Even crossing the street is often safer just to drive. Even walking from your car to the store is to be limited. Hence every store has a parking lot. 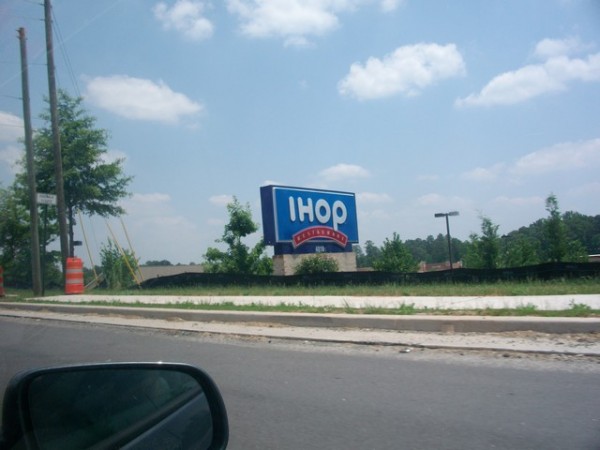 International House of Pancakes. The actual building is down the slope.

It is also often cheaper to develop a new plot of land than to even bother tearing down a derelict building. This said I was surprised the number of re purposed buildings. Most of them it seemed become “we buy gold” places. These kind of places are interspersed among the new shiny places and the 30 year old strip malls. Add the ubiquitous orange construction barrels as well. There is always something being built.

Alcohol sales are regulated by the individual states. Only specific stores can sell anything stronger than wine. In Georgia, they are called Package stores. So that small liquor selection in the local grocery store in Germany is replaced by a store with every conceivable type of liquor all in various sized bottles. These often seem to end up on the side of highways. Because really, while driving is the time to be thinking about how much alcohol you want to buy. It is probably a cost thing in reality though. See above the need of every building for its own parking lot. 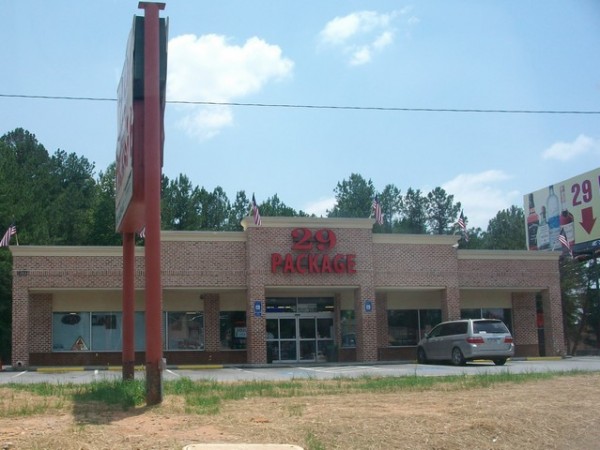 Alcohol is sold only in special stores

Living abroad means sometimes going home and seeing things in a new light. Things aren’t always as you remember and sometimes they are stranger. Going back on the road near Atlanta was a bit of a surreal experience. Having Ali giggle when I was happy to get pictures of what amounts to dull stuff along the road was priceless. 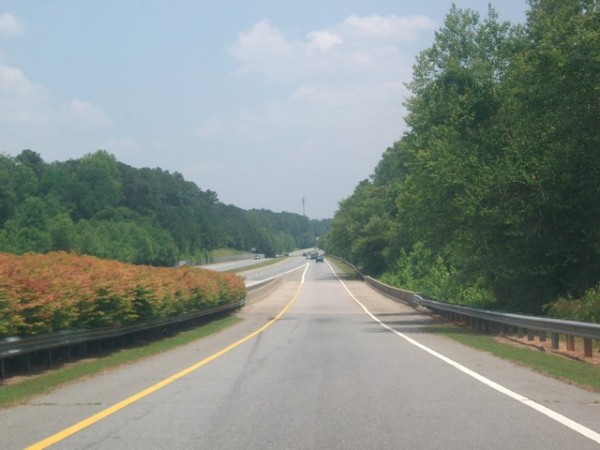