When Ali started planning the group trip to Tomatina near Valencia she booked an apartment. With four of us there, a full apartment was far cheaper than a hotel and nicer than hostel rooms. The apartment was in a great residential area and the block seemed to be named for Honduras. Not the country (we asked), but a cross street. Staying in a residential areas is fast becoming my preference when traveling.

I really enjoyed being in the residential neighborhood and not the tourist one downtown. Like most things this comes with a number of pros and cons, though I definitely think the pros outweigh the cons. This is the kind of vacation place that links into why I like being an expat. I am traveling and yet feel a part of a local culture. Not quite there long enough to be recognized, but close in a few places. This is usually the kind of travel that I enjoy the most. Being in a place for a while and at least getting and idea of what living here is like without a rush through the major sights.

We found this place as well as one in Paris for a weekend on AirBnB. So far we have had pretty good luck with them.

Away from it all

The apartment was outside of the city center so it meant walking a long way into the sights or taking a cab. It was on a major road, so cabs were easy to come by and with the 4 of us it was just as cheap as the bus. We actually did try the bus once and it didn’t really work out. After doing the math, taxis become the standard method. The only trick was pronouncing the address for us non-Spanish speakers. So getting to the tourist spots or train station meant public transport or the expense of a cab. So in some way its was too easy to just stay there and avoid tourists.

An apartment is not a hotel, so no air conditioning and no daily clean sheets. It also meant no wifi, free or otherwise in the apartment. It was also above a night club. Night club in Spain seems to mean open from 9pm until 9am and busy throughout. I remember going to sleep with music and waking up hours later to similar music and the sound of people talking. Thankfully we were far enough up in the building for it to be muffled. 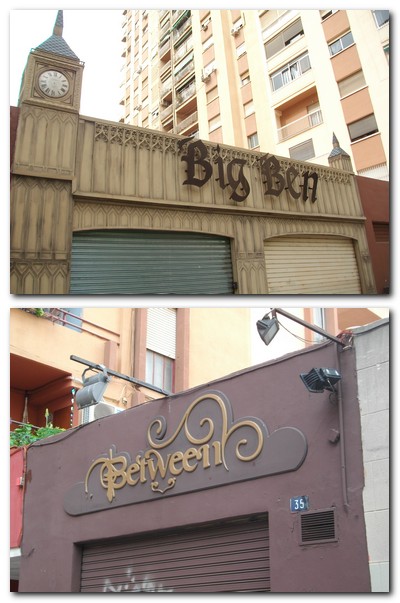 In the midst of it all

Being a part of a neighborhood for a week was nice. We got to be among the locals and see at least how this group lives. In this neighborhood, massively tall apartment buildings are clustered around open plazas. Sometimes one plaza against the main street and another in the back toward the more minor street. It took us a few days to even realize this back row of buildings. nestled among the gargantuan towers were all manner of restaurant, bar, cafe, gelato place, pizza joint and the occasional pet shop. I went walking one morning just taking pictures of the (closed, remember morning in Spain) cafes and fronts and all the great names.

Grocery stores were plentiful and varied. We even found one that was open on the Sunday that we arrived. Especially living in an apartment this made eating at home (or more aptly for us drinking and snacking at home) easy and cheap. Beer in a sixpack for 50cents a can, and this wasn’t the cheapest on the shelf. I just couldn’t bring myself to buy the 22cent cans. It just seemed wrong.

And of course this all meant that once we knew what to look for this area had tons of great places to eat in a short walk from our place. The guy who ran the pizza place next door was happy to practice his English on us. I had a nice chat with the pharmacist about the similarity of Italian and Spanish, in a mix of Italian, Spanish and English.

We went to a gelato place a couple of times. It had free wifi, a large selection of flavors and air conditioning. The guy even started recognizing us. Asking how Tomatina was and such.

The Honduras Bakery, whose kind people dealt with my attempts at Span-taliano(which as we all know is the speaking of Spanish using only imperfect knowledge of Italian) and explained the meaning of the Honduras names on everything around, was where I went to grab breakfast most mornings. Things like chocolate muffins and apple tarts came back to the apartment with me. (It followed me home, can I eat it?)\

We did have a bad experience or two when we went looking for food. Slow service and odd menu choices, but this only seemed to happen when we went walking far from our little block. I think the best place we ate at was right in the building just away from the street. We ended up at the Black Rose two nights trying all manner of pasta and tapas. Sitting out the evening on the patio eating, drinking and drawing on the tablecloth was a highlight of the trip.

And Yet Still Present

So we may not have seen every tourist sight in Valencia, but we saw most of them. It was still a great place to be out of the crush of a touristed old town. Being new grocery stores and local filled restaraunts reminded me enough of home to not feel any of the culture shock of being in a place where I know so little of the language. I love to travel, but this kind of thing. Living among locals and not in the midst of the highly polished things. Local places with local prices help the budget too.

Ali’s Look at Valencia in Pictures

One of several of Val’s posts about Valencia

Jaime’s post including us drawing on the table at the Black Rose.