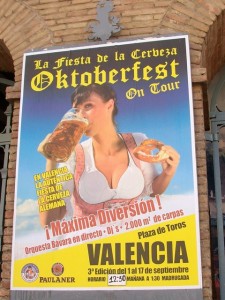 Wandering around Valencia for the week of Tomatina we kept seeing posters for Oktoberfest in town. Since we had pretty much nothing planned for the week other than playing in tomatoes, we decided to go check it out. Oktoberfest is a pretty famous thing yet also quite Germanic. To find such a festival replicated in Spain would be a sight, we though. It was totally not Germanic, yet great in it’s own way.

Jaime and Val and I took a cab from our apartment to the Plaza del Toros, the bullfighting ring. So right off the bat, the idea of an Oktoberfest celebration inside of a bullfighting ring makes it feel a bit odd. I knew then that this wouldn’t be a normal Oktoberfest. I mean it had all the parts, but still the Spanish are quite a different breed than the Germans.

I think of Spain as being a wine culture, but I saw plenty of beer around in Valencia. The grocery stores were full of it. A lot of Heineken and Becks, but also a few local ones. Most of it looks quite Germanic though. One very cheap one was called Adler and sold for 20 cents a can at the place across from our apartment.

At the Oktoberfest though, it was all Paulaner. Paulaner is one of the larger, very well known, breweries in Munich. We definitely see it all over Germany and I remember it in the US as well. They have a large tent at Oktoberfest in Munich and apparently were the sponsor of this event in Valencia. So at least the beer was authentic. There are special beers brewed for Oktoberfest.

It was good beer though. One liter was 8 euros, so not quite as expensive as Munich, but not as cheap as 20 cents a can.

French fries, sausage and steaks. Big mounds of them. Nothing lacking in the food area. At least here the Spanish and the Germans have something in common. They seem to both have a penchant for ham and pork products as well as potatoes.

It was so cool to see a big mound of food. No real organization, just piles food waiting to be roasted. They did even have a section with cakes and pastries, but still the highlight was the meat and potatoes.

I don’t speak or read much Spanish, but I at least understood some of the hanging banners. It was cool to understand the Spanish for sausage on a plate.

Ok, I’ve only been to Munich once, but I’ve read enough to know that they sing there. Drunken Germans sing and raise their glasses even without it being Oktoberfest. Drinking songs and Bavarian mirth is as much a part of Oktoberfest as the beer. These people had it down pat. Music was loud and people were up dancing on the tables swinging their beer mugs back and forth.

There was certainly entertainment and drunkenness, but there was a difference from what I expect from the bars and such at home. They had a DJ that pulled people up from the crowd and had them translate phrases into German without knowing German. It was entertaining, especially as I know German but no Spanish.

And Yet A Bit Different

First off, it was a single tent in the middle of a bull ring.  The beer flowed copiously, but still the mojito stand was unusual.

I wouldn’t expect a conga line as we saw there. Above all, there were people standing on both the benches and tables, when there were multiple signs posted forbidding such. That would never occur here. It was great to hang out and see what Spain was shown as Oktoberfest.

Read about the Munich Oktoberfest at Inspiring Travelers.