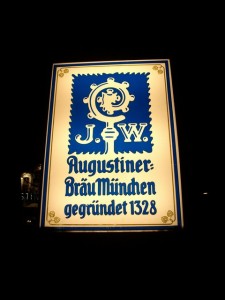 Hofbräuhaus is certainly well known and popular stop in Munich. It is where tourists seem to flock to for the Bavarian beerhall experience. Munich is a city of beer. Hofbräuhaus is not the only beer hall, there are others. Augustiner Keller is one such place.

I went to Munich on a business trip and my colleagues and I went out for dinner. I wanted to do the beer hall, Munich touristy thing. I in my ignorance suggested Hofbräu. They laughed and turned up their nose a bit and then suggested here. There were certainly tourists here, though plenty of Germans as well. It was cool enough that no one was sitting outside, although my friends said there was an enormous beer garden next to the building. We wandered in to find a table. The wait looks like it could have been long, but we were there fairly early and were lucky, finding a spot in the corner near the windows at a table for four in the Jagdstube. This is German for the Hunting Room, as evidenced by the antlers.

The food was standard Bavarian fare of various sausages and other cuts of meat. The beer was pretty good. Although I didn’t know about the beer hall I did know Augustiner beer. I have seen it in bottles in grocery stores and train station stops even here in Baden. Several the pubs in Freiburg offer it in bottles as well, including the one around the corner from where I live. They are squat bottles that are still a pint (0.5L) so recognizable. As much as I like it, I am not a beer connoisseur so I won’t make up any fancy descriptions. I will say that the beer was fresh and smooth and tasty.

I would totally recommend going to the Augustiner Keller. I have not been to the Hofbräuhaus, but this place was really awesome and at least felt somewhat traditional with the hunting pictures and antlers on the wall. It is still a big well known place with tourists, so don’t expect a corner pub, but worth coming to if nothing else than to skip the place that “everyone” goes. The Keller is at Arnulfstr. 52 and not too far from the main station in Munich.