For English speaking minds that act like a 12 year old, Titisee is a great place. It ranks up with Lake Titicaca as a place to go just for the name. It isn’t so much fun of a word in German, but still a nice place to visit near Freiburg. I have a monthly tram pass that extends outside of the city for a long ways. Titisee is an easy 30minute train ride up into the Black Forest. It is quite touristy, but still a nice place to spend an afternoon.

The easiest way to get to Titisee is by train. The trains leave every half an hour from the Freiburg main station and the trip takes about 40 minutes. The destination will be either Neustadt or Schluchsee. Both of these are beyond Titisee so will both stop there. The town is in the local transport region, so tickets are easy. Either buy from the Deutsche Bahn machines or if you are already using trams in town, get a day ticket for Preisstufe 3 (price level). As of writing it is 10.60 Euro for a single or 19.00 Euro for a ticket valid for up to 5 people traveling together. This lets you use all the trams and the local trains out to Titisee.They can be bought on the trams(with change only, the machines on trams don’t take bills) or from tram drivers.

As you are watching the trees go by, remember that this is the forest that is featured in many a Grimm’s Fairytale. Hansel and Gretel lost in the woods kind of thing.

Over the Hills and Through the Woods

The trip up is a great one. Pick a nice sunny day if you can. The train follows the Höllental(Hell Valley) up into the forest. One of the stops before it goes up into the steep part of the valley is called Himmelreich (Heaven). Take a look out of the right side of the train when going up. At one point the cliffs close in quite close, if you are quick between the tunnels up top there is a deer statue on top. That point is called Hirschsprung (Deer-Jump).

The trains that run up there are double decker type. Try to get a spot near a window on the top deck if you can. Though this is a very popular place, especially on a nice Sunday.

Well, it is a lake up in the mountains that form the Black Forest. Since it is so close to Freiburg it is a quite popular day trip. In the summer even if it is a bit muggy and hot down in town, Titisee is high enough that it is cooler with a breeze.

The town is popular with tourists from all over. France is close so we get a lot from there. Last time I was up there with Ali we saw a big group of Japanese as well. So it is apparently world known somehow. There is a fairly large retired community and a number of hotels for getting away from it all. I have never eaten more than ice cream here. Although that is certainly a lot of fun to just come up for a nice ice cream on a hot afternoon and go home.

Titisee is an extremely touristy town. The pedestrian area between the train station and the lake is lined with tourist shops. Everything from local cured ham and schnapps to every imaginable form of kitschy souvenir. Coocoo clocks are also quite big here. If you want one, I don’t think this is such a bad place to buy one. My parents were able to have it shipped back to the US without problem. It is touristy, but the guy we talked to said that all of the artisans are local for the clocks. Wood carving and these sorts of clocks are traditionally part of Black Forest culture.

Titisee: The Lake Itself

The central aspect of the town is the lake itself. The pedestrian area lined with restaurants looks out over a rocky beach. There are several stands to rent paddle boats. One dock leads to a regular tour on a bigger boat with commentary in all different languages. The tour takes about 25 minutes according to the sign. One day I went up with a friend of mine homesick for water and we went on the tour twice in a row. Despite which I just enjoyed the sun and ignored the commentary. I’m sure it was very informative about the lake and its history, but it was such a nice day.

This is primarily a summer place. The train ride is certainly pretty in the winter, but most people will go further up to Feldberg and the ski slopes rather than sit around the frozen lake. If you have gotten this far and still don’t understand my lead-in about it being a great thing for the 12-yearold mind, the place name is pronounced like Tit-tee-say.

For more pictures, go to the Grounded Traveler Facebook page. Bonus pictures of Titisee and Neustadt. Remember one of the destinations for the trains went on to Neustadt, it is another town further up. 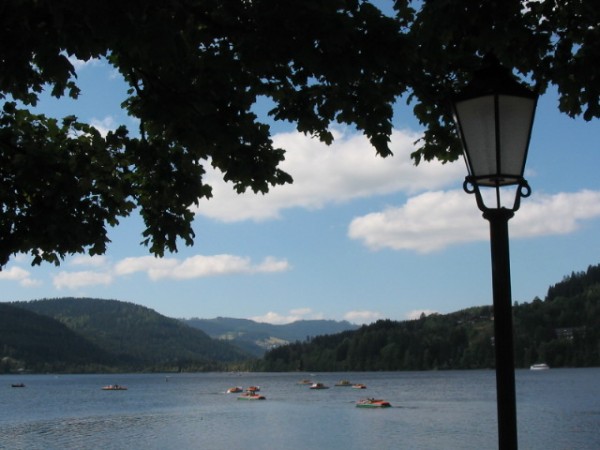