One of the reasons I moved to Europe was to do weekend trips to new places. I have not done that as much as I have wanted. This weekend however we did just that. My wife and I took a few days off of the stress of dealing with our renovations and went to Liechtenstein.

I will dedicate a full post to Feldkirch later, but here it will suffice to say that it is a pretty cool little medieval style alpine town. We decided that we did not need to spend two full days in Liechtenstein and spend one night over the Austrian border here. It was worth it to walk around and see another place. There is a castle overlooking the town and a neat little market.

The buses to Liechtenstein from Feldkirch run from platform D in the bus plaza near the tourist board. Three lines run during the week and can get you the entire length of the neighboring country, but on Saturday and Sunday only one line runs and only to Schaan. We bought day passes and they were great. For 12 CHF each we could hop on and off the buses in the entire country for a day. We learned later how expensive the direct tickets were and this was a great deal. Since we started in Austria we were even able to pay for them in Euros. 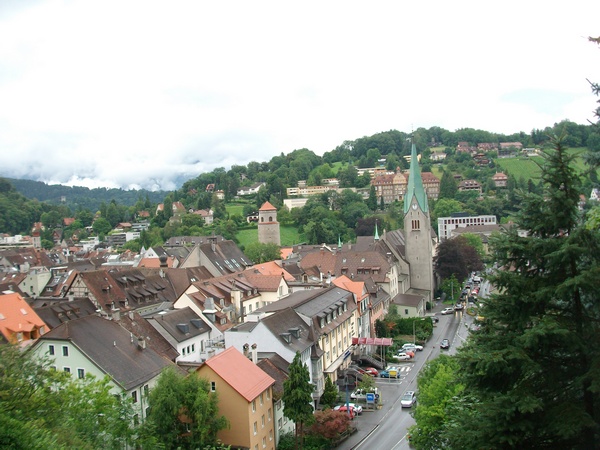 A view of Feldkirch

Seriously. We got on the bus and started asking questions about the day passes and the driver was so helpful. He gave us a schedule of all the buses in Liechtenstein and a map of Vaduz. He recommended a town up in the mountains to see and even double checked the computer when he thought the day passes looked too expensive. He chatted with us and directed us to the next bus into Vaduz and waved as he drove off. I spoke German with him, but he heard us speaking English and responded some in that too.

Later that evening we decided to go up to another town from our hotel and were a few seconds late getting to the stop. The driver saw us waving and stopped for us. Even going so far to check that he was driving in the direction we wanted. Then on the way up into the mountains he stopped to chat with an old woman and her dog. Up at the top, we encountered the same guy having a piece of cake in a restaurant and were talking to him.

The public transport in this tiny country is excellent with half hour service even on the weekends to almost everywhere I saw. Definitely get a schedule booklet of the buses, it was quite helpful. The drivers made the whole system even better. 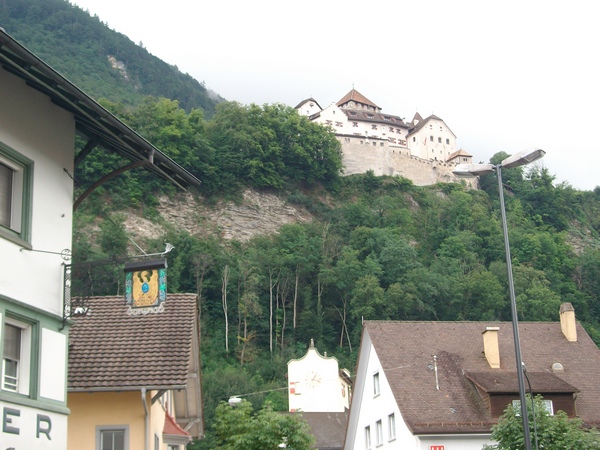 Vaduz, Castle watches the town below.

It is on all of the posters for Liechtenstein. Vaduz castle looms above the town on the cliff. This is the capitol of the country and where most people end up. And most likely where most people leave from. The pedestrian area of the town is about a 2 minute walk from one end to the other. There are a few restaurants and hotels. The castle is definitely impressive to look at and had we had more time and energy, we might have walked up to look closer at it. You can’t go in, but there is a road that you could walk up and get a vantage point on it. The sign pointing up said 20 min walk.

We did the touristy bit here. Stamp in the passport for 3 CHF and a number of postcards and stamps sent to friends and family. Although the official currency is the Swiss Franc and with it some pretty expensive prices, a lot of places took Euros. This is not a cheap place to visit, but it isn’t really very big either. Knowing I wasn’t going to spend a week here made the higher prices (and things like having to order fries with my burger separately) tolerable.

With the sign for a restaurant mentioning that they have been serving Contiki tours since 1977, I really get the impression that the vast majority of the tourists only go here. They go to check off the tiny country and get the stamp and then move on. We decided that we wanted to see more so booked a hotel for one night. 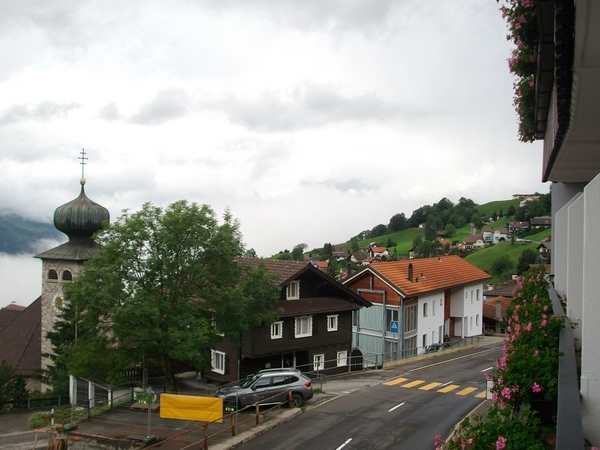 Treisenberg, view from our hotel

Triesenberg – A View of the Valley

The town center is small, but easily reachable. Bus 21 leaves from the Post in Vaduz every half an hour. There are a few hotels, a church and a few restaurants in Triesenberg. It is a quiet alpine town, but some of the best views of the trip. Our hotel, the Oberland, was good. Views were great, the breakfast was included and welcome. It is just a short steep walk up from the bus stop.

Even in the sixth smallest country in the world, it really pays to get out of the “big tourist city” and see the rest of the country. The next post will show some of the other places we saw out away from Vaduz. Stay tuned and enjoy these views. 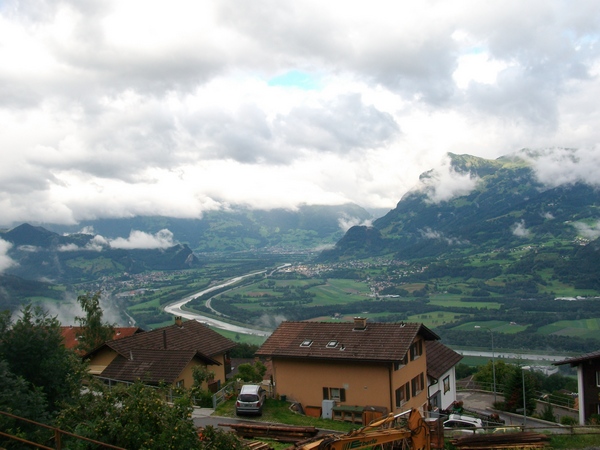 View of the Valley

10 thoughts on “Into the Alps – Weekend in Liechtenstein”