Wurst is a basic term for sausage in German. Anything that is a sausage is a type of Wurst. Germany being the land of Sausage, there are lots of types of Wurst.  These are however some more widely known types and a look at the language of sausage. 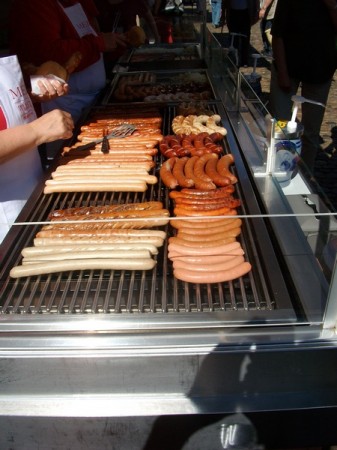 As mentioned Wurst means sausage. So anything with “-wurst” in the name is a type of sausage. German compounds words together, so it may just be a part of the word.

Bratwurst is a generic term for cooked sausage. It often seems to be used to describe a sausage cooked with oil on a griddle. This is in counterpoint to Grillwurst that is more over an open fire, although I have seen Bratwurst used to describe that too. When ordering it is often good to just point at what you want.

Würstli, Würstle, Würstchen : These are different regional forms for what amounts to “small sausage”. I don’t really get the size distinction between a full Wurst and a Wurstchen. Though if you go into a store and buy them in a jar the Würstchen are the more hotdog like things.

Typically sausage is made from pork. If it isn’t listed, I assume pork. You will either see the meat name followed by “-wurst” or the word “von” or “vom” followed by the meat. So either “Rindswurst” or “Bratwurst vom Rind” are sausages made from beef. 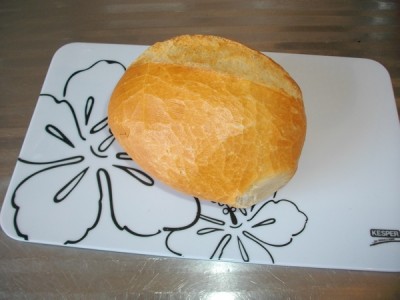 A sausage ordered from a street vendor will usually come with either a slice of bread or a roll sliced open. In our marketplace it is common to get roasted onions with the sausage.

Each locality has a different way or recipe for preparing sausage. Sometimes several. Often you only find them in that locality, while other times every market will have that type.

Nurnberger : Small brownish spicy sausages similar to breakfast links in the US. These are usually served 3-4 to a roll.

Thuringer : Long thick whitish pork sausages with herbs which are often visible in the meat. Though this comes from Thuringa, it is very common here in Freiburg.

Lange Rote “Long Red” : This is the Freiburg speciality. They are as described long, thin and red. Ask for them “halbiert” to get the cut in half so they fit better on the roll.

Wiener : Wien is Vienna. These are similar to the hotdogs we know and they often come in pairs.

Frankfurter : Frankfurt gives us this similar type of hot-dog like sausage that like the Wiener comes in pairs.

Lyoner : Lyon is a city in France. This stuff is a spreadable cold sausage that comes in a can. Apparently you spread it on bread to make sandwiches, but it doesn’t appeal to me.

Hamburger : Wait, this isn’t a sausage. From the city of Hamburg comes the Frikadelle which are ground pork patties that become the cultural basis for the hamburger that is known in the US. 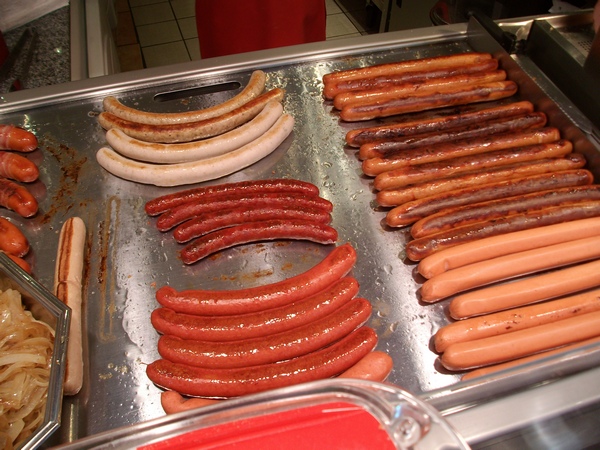 Various Types of Sausage for Sale from the Griddle

An animal all its own. Currywurst is a sausage sliced into disks and drenched with ketchup and sprinkled with curry powder. Depends on where you go it comes with either bread or fries. Berliner seem to claim the birthplace of currywurst, but I see it everywhere here. There is a shop in town here that will spice up the curry ketchup to sinus cleaning levels. Make sure you pick up a fork or one of the little wooden sticks so you don’t have to eat it with your fingers.

Weißwurst is a Munich thing. They come as a pair of fat sausages that even when cooked are pale white. They get served with a sweet mustard and often a pretzel and beer to go with it. The thing is, they are normally for breakfast. The story seems to be one of lack of preservatives in the old days that meant they needed to be eaten fast. Now you can certainly get them anytime of the day.

Markets across Germany always have a few butchers that set up stands and sell their sausages to the public. If you want a cheap way to eat decent food look for them. Fixed stands doing the same thing on the main street are just as common and usually just as good. Festivals bring more stands as well. Anywhere you go in Germany a sausage meal is probably just around the corner. This guide should give you an idea of what to point at.

This page was submitted as a part of Expat Germany’s Food Friday.

28 thoughts on “From Whence Come the Wurst”