Commuting in the US was roughly 45 minutes each way during my last job. This was on the low to middle range among my friends, some driving far longer. I have been commuting by bicycle for 2 of the 3 years that I have been in Germany. It has some ups and downs, but overall a much better thing for me. It is amazing to me how similar the commuting public is regardless of car or bike.

This is a follow on to my article on the Culture of Public Transportation. In a routine where we have to go back and forth to work, there are commuters and thus a rush hour of sorts. Here is an idea of what it is like to commute by bike. Yup, though a lot of riders are students, we certainly get rush hour here. Especially on nice days, bike riders flow out of the city in the evening up the river to enjoy the sun and water. Fridays are heavier too, as people are ready to be home. None of this is bad enough to keep you stuck for 3 hours of bumper to bumper, but the trends are there. 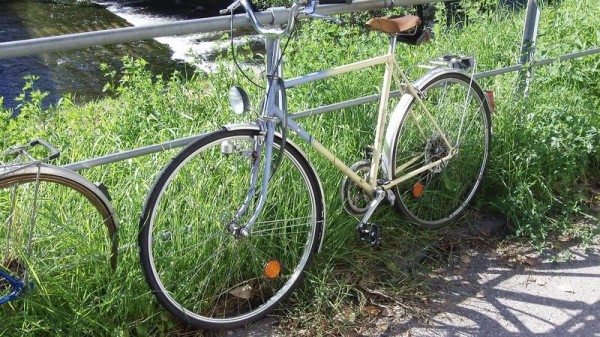 Left Turns Can Still Be a Pain

Apparently for right hand drivers (this being all of mainland Europe and the US) the dreaded left turn is just as annoying on a bike as it is driving. On my commute to work I have 2 left turns and 1 coming home, all without signals.While nowhere near as potentially annoying as unsignaled turns in the US might be, there are similarities.

The first Left heading into work is to get out of my side street onto the main cycling street. Riders can be hidden by the long rows of parked cars in both directions, so there is that same idea of easing your nose out to see who is coming. Add to that the occasional car on the bike street. Thankfully the second left is a round about. Coming home I have to turn off of a cross street back onto the cycling street. There can be people coming across in both directions and usually a car or two. Again not ever been a problem, but I have to pay attention.

The bane of commuters is often finding a parking spot, once you get where you are going. This is no different as a bike rider. Freiburg is a city of bikes, both due to the number of students as well as the green reputation. The center of town is a “no bike parking” zone. They have indeed set up bike parking areas around the edge of the pedestrian zone, but they fill up fairly fast. I end up parking my bike just with a bunch of others near where I work on the very edge of where we can ride. It is quite convienent, but even that area gets full.

So with several options to park the bikes and each potentially many meters long worth of bars to lock to, the problem of remembering where I parked is still with me.

Parking in the US, often you get advertisements shoved under your windshield wiper. These are annoying, especially if you don’t notice for a few days or it just happens to rain that afternoon. I have a basket on the back of my bike.. (quit giggling, they are very common here and quite nice to carry some very manly six packs of beer in…). I very often find stuff in it. From advertisement leaflets to empty cups, and today even a single glove. People seem to think that an open basket is just like a trash can. Ugh, oh well.

All Backed Up with the Light

When I come out of town and head home, I have 2 crossings to make that do have lights. These are standard crosswalks and cross fairly busy streets. So when the rush hour starts to hit and more people are heading home, they all back up around the light and rush to get through when ti hits green. And since we aren’t in lanes, it can end up as a free for all. This can be especially true with pedestrians to avoid. The difference here is that since it is “just” a crosswalk, some people will definitely run the reds if they don’t see traffic. Don’t be fooled, I have heard that police will definitely still ticket bike riders for that. Bikes definitely have to follow all the rules. I did have a friend get a 15 Euro ticket for riding the wrong direction.

Just like in the car, sometimes you get stuck behind a slow driver. Some people are just out for a leisurely ride and others are hauling child trailers. Sometimes you even get stuck behind a group of friends riding side by side, which I have though never seen on an American interstate. There are no painted lanes obviously, so passing is potentially possible anytime. Sometimes I will just enjoy the pace and the river and other times I peak around to make sure I won’t be heading into an oncoming bike and just power past. There is an odd thrill to be found by blasting past a slower bike, almost child-like

On the Other Hand : the Differences

Accidents are very rare. I have seen only a few in the entire time of riding here. Most are very minor and I have never seen an accident stop the flow of traffic. We are all moving at much slower speeds, which seems to help reduce both the frequency and severity of accidents. Cars are fairly respectful here too, even with bikes turning left across their path.

Adverse weather seems to make the traffic less not more. The big downfall of the bike is being exposed to the elements. So if you like riding in the cold or the rain, you usually have the road to yourself. A lot of people (including me) choose to ride the trams when it is raining, snowing or just too cold. Though I did see people riding in the snow and ice last winter. No thanks.

As a great benefit there are no gas prices to worry about. Parking is free. The bike itself wasn’t very expensive, and although I have had to put some maintenance into it, those costs were pretty minor.