Apothecary On Every Corner

Being sick while traveling sucks. At a point where all I want to do is wrap myself up in a blanket on the couch and watch TV and eat soup, I am in a foreign place where I probably don’t understand the TV shows and and the soup may actually be looking at me. I never feel more isolated and out of place when traveling than when I have a cold.  I always think of the doctor first in the US, but the apothecary in Germany. I say apothecary because I like the word and it is similar to the German word, but these are called chemists or pharmacies depending on where you are from in the English speaking world.

Apothekes are probably the most common shop in Germany (only to be rivaled by mobile phone dealers). I feel like every corner in town has one. It would be an odd block in a downtown area that didn’t have an Apotheke on it. Sometimes they are more subtle than others, but they are there, lurking. They are shown by large red A’s on the sign, which is apothecary (Apotheke in German) not adultery. Normally they’re open until 6-7pm Monday – Saturday and in smaller places may be closed at lunchtime. At least in Freiburg there are always a few that are open on Sundays. A lot of the Apotheke’s in the center of town have a little lighted sign that explains which one is on duty that weekend as the exact ones rotate.

All medicines must be bought here. Prescriptions are filled here as well. Despite that if you go walking around in an apotheke you will notice a lot of other things, like skin creme or cough drops. In my experience there are better and cheaper places to buy those things. Though if you need something for a cold, going to an apotheke is the only way.

During my first Trans-Atlantic crossing, I caught a cold. Whether it was the confined space on the boat, the late nights out drinking with my new friends or that we slept out in front of the Calais train-station in the cool summer evening, I don’t know, but I was sick. Coughing, runny-nose, unhappy-sick. I spoke decent German, but no French.  So the morning after the night in front of the station, I told the ticket lady “first train anywhere that they speak German”. She sold me a ticket to Cologne. I knew no one and had travelers health insurance so I wasn’t even going to attempt a doctor. Even still I hit up the apotheke in the main train station for something. The pharmacist didn’t just straight away sell me a “cold pill”, but asked about the symptoms to pick one of a few. Maybe this was a placebo effect and all the pills are the same, but it was good to feel taken care of. The next few days were spent in a hotel and a sunny square just trying to breath.

While I was a student in Freiburg in 2003 I lost my voice. I don’t know why or how, but I woke up and couldn’t speak above a whisper. Thankfully I didn’t have any oral exams, but it was the day that I was supposed to pick up my parents at the station for their visit. Ok, in the US this would not have been a big deal, yet this was their first trip to Germany and I was tipped as the tour guide and translator. So I walked into an apotheke and “talked” to the guy behind the counter. Think how hard it is to explain what is wrong normally. Add the language barrier and the fact that I couldn’t even talk anyway. I learned, and will likely never forget, the word for coughing in German at this meeting. (That word is “husten” by the way.) It was kind of funny to see a grown German man in a white coat pantomiming a cough to me in the store. He gave me some tablets to suck on that helped. By the time my parents showed up that afternoon, I was able to whisper more strongly. 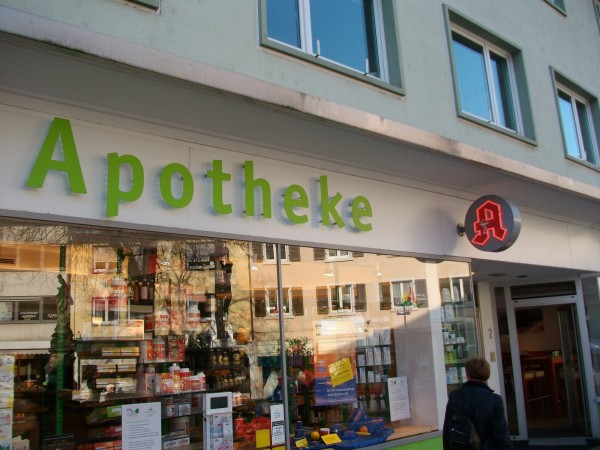 I know that pharmacists in the US go through a fair amount of training. However with the vast array of over-the-counter medicine and supplements, I don’t think many people use their knowledge. Here all medication must come from a apotheke, even aspirin is sold there. This doesn’t mean you have to have a prescription to buy it, just that they sell it. So there is always someone to ask questions to about whatever it is you want to treat. I expect this helps cut down on the number of doctors that have to deal with minor things. A friend was telling me the other day that the profit margins in apothekes are pretty high. This bugs me a little, but since every medicine comes from apothekes you can’t avoid it. And the prices for a lot of things still feel cheaper than in the US.

I am always astounded though how patient and knowledgeable some of the people are there. I went into with a pretty nasty bug bite on my foot at one point. The scene of me trying to show the bite on the side of my foot while keeping balance was one to see. I got a cream that worked great. The bite had lasted for a few weeks before I went to the apotheke, but was gone in days afterward.I have even been told when things look too serious to be medicated and I should go to a doctor.

As a new person in an area and especially as a foreigner, this sort of basic health care is nice to be able to rely on. I have had visitors that needed things. The language barrier adds itself here in a different way. Although I speak decent German, I still don’t know the words for medical conditions and most of the medicines have different names. It is nice to be able to go in and describe what you need without knowing the name and get something that works.

Tip: If you are traveling, not just in Germany but anywhere, and take any sort of medication even rarely; write down and bring the generic names of things. This will really help trying to get something even over-the-counter. This goes double for anything you are allergic to.

Any interesting pharmacy stories from abroad? What do you find the most interesting about other country’s basic health systems like the apotheke?

Ode to the Pretzel German Obsession with Fresh Air