This is the second of a two part photo essay of my Contiki bus trip around Britain at Christmastime. The first part covered just our England stops and thus was both the beginning and end of the trip. This covers the days spent in Scotland. We were in Scotland over New Years so got to see Hogmannay preparations in Edinburgh.

Our first stop north of the English Border was Edinburgh and where we stayed two nights. This was a really enjoyable city and one I could see myself easily coming back to visit for a week in the spring. The winter though is cold and blustery, thus was far nicer to be inside than outside. The saving grace was that we were there for the 2 days prior to New Years, so the city was in a joyous mood.

Edinburgh castle sits at the top of a long sloping hill. A lot of the shops and sights are along this road as well. First order of the day was food, so a few of us went off and found a pub. I had macaroni and cheese, which I so don’t associate with Scotland, and a beer, which I do. Both of which were very tasty. I didn’t manage mac and cheese again on that trip for some reason, but I still remember the pub with the antler motif.

After food we met up at our assigned time to go through Mary King’s Close. The closes are steep narrow alleys leading from the main street down the side of the hill. One of these called Mary King’s Close was built over by a government building at one point. This meant the people were removed and the houses re purposed as storage or just abandoned. Now many years later they have restored the rooms and lead historical tours through them. Really this was a highlight of my trip in Edinburgh. For me this is the kind of museum style authenticity that feels fun to walk through. The tours are small groups due to the cramped places, so you get a time and have to meet or lose your place. Well worth going. You can’t take pictures, so sorry you are going to have to go for yourself. This will ever be the underground tour to be compared again. Sorry Prague, you didn’t meet the mark.

There is a whiskey museum and a castle to walk through as well on the hill. My group of wanderers decided both the castle and museum were too expensive and went for tea at the Elephant House instead.

Hogmannay and New Years in the Highlands

The tour had us leaving Edinburgh on December 31 and driving into the highlands to spend New Years. Hogmannay is the famous New Years celebration in Edinburgh. This year some famous artist that I had never heard of was doing the decorations. These consisted of 20 foot high metal balls covered in flower pots set alight. There were other shapes as well as little pillars of ever-burning coals. They set them alight on the night of the 30th as well, so we got a chance to see what it would look like with less crowds. Hey double win, fire without crowds. Even still it was difficult to move between the people and the fire. I can imagine it was crazy on New Years with actual celebrations and drunken revelry.

At least the fire kept the chill wind at bay somewhat. Seriously, next time spring or early summer. In the end we did do a bit of a pub crawl. The pubs in Edinburgh seem quite varied. On one end are the traditional dark wood places and the other was a sports place that could have been on a college campus in the US. I heard about metal clubs as well. So this seems to be the pub place. And really when the sun goes down at 3:30 pm, I can understand why the pubs are so popular.

Really I wish we had stayed in Edinburgh another day for the party. Our actual New Years was a bit anti-climatic. There was a big cockup with the dinner and our group. It kind of sucks but it was actually quite cool to see him arguing with the hotel staff in a kilt. It just wasn’t what any of us expected. The snow was pretty and we salvaged the night withplenty of drinking fun after the dinner.

On the way out from Edinburgh we stopped at Saint Andrews. All I knew about it was the name of a golf course. We saw the ruins of a cathedral and a remarkable windswept coastline. Seriously, this was the windiest (and thus coldest) day I have ever experienced. Seriously ever! That was the day I was so happy for my long underwear.

I also learned that Saint Andrews is a pretty famous university and a lot of the royal family has studied there. The buildings are certainly pretty. I did see the golf course, but as I don’t play or like golf this didn’t interest me. I was however getting a cold, so I took a brisk walk into the quite nice little town to get some medicine. If it hadn’t been freezing cold, windy and starting to sleet I would have been happy spending more than just an hour there.

A line of lakes cuts across the top of Scotland. As we drove out away from our New Years overnight we headed down this row and stopped at Loch Ness. Ok, I know this is a touristy thing and really it is just a big gray deep lake, but I was happy to see it. I kept having mental reruns of the Scooby Doo episode at Loch Ness. Ahh cartoons.

The next few pictures don’t need much introduction. We had a long drive after Loch Ness through the highland scenery. It was beautiful in the snow, though I imagine it would be beautiful in any color.

So yes, we went to Glasgow too. It was really not spectacular, but there are reasons for that. I don’t even have any decent pictures to show for the night.

As for the reasons, first, it was Jan 1. We had all been forced up early in the morning after a late night of drinking for New Years onto the bus. It was a long (but beautiful, see above) trip, but we got to Glasgow well after dark. The Glaswegians were apparently also sleeping off their night before because the city was empty and mostly closed. I mean seriously, we walked out to some cathedral and back and saw two people walking. It took nearly an hour of wandering to find a restaurant that was open to have dinner, which is all I wanted at that point. So. sorry Glasgow, maybe I didn’t see your best side, but really I saw nothing that made me interested in returning. 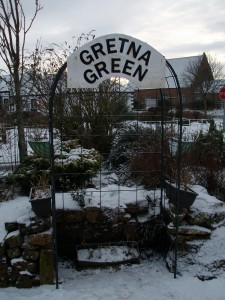 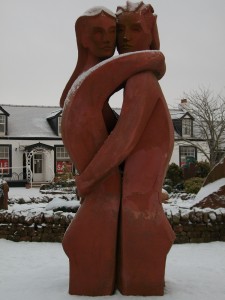 The final stop before heading back over the border into England was Gretna Green. It is kind of a little group of buildings with a cafe and a shop in the middle of nowhere. The bit is that this was the first settlement in Scotland with any sort of official when coming from England. Marriage laws got changed in England during some kingship and got more strict. Since he had no rights over Scotland at the time, young couples would come up over the border and have the blacksmith marry them. The tour was a bit cheesy but kind of neat.

And back over the border.. check out the England part of the bustour if you haven’t already.