I like living as an expat in Germany, but sometimes I just have to get out. I had taken a Contiki tour to Croatia the summer before and really enjoyed it. So I booked a bus trip around Great Britain for the week after Christmas in 2009. It was a neat trip and a unique view in the cold of winter. This Post is the first of two and deals with the England half of things. The second post will look at Scotland.

A friend of mine from the US living in London that haven’t talked to in nearly 15 years very graciously offered to let me stay in a spare room in her apartment. She showed me London at Christmas time, which was great. One thing we wanted to do was a guided walking tour. We decided on a Sherlock Holmes walk where the guide went through one story and we walked to all the various places in the book as he talked about what it would have been like at the time. Fantastic, except we got delayed in the tube. By the time we got to the meeting spot, they had already left. We ended up catching up with them only 2 stops down with the help of a family with a cell phone also looking for the tour.

The next day I joined my bus for the tour. We did a quick run around London. I am so happy with these next two pictures. First the blurry motion bus in front of the Cathedral and second the look across the Thames at Big Ben in the sunlight. What a great start.

From here we went to Windsor Castle and then to Oxford. Windsor was actually quite a nice little place. I was so hungry, I decided to get something to eat instead of walk as much. I have never been on a bus tour, and the time crunch was one thing I had to get used to. Spending an hour in a cafe could mean skipping a site. it was really sunny though cold. I would no recommend the audio tour, though the castle is nice.

Oxford was quite disappointing to me. I had read all about the different colleges and how each one is almost like an American fraternity with a dining hall and all of this camaraderie. I guess I was expecting something more spectacular, almost Hogwart’s like. It isn’t like that. Well not as I saw from the outsides of things. the most interesting thing was in fact the Pub. There are apparently two famous ones. The Eagle and Child and well some other one that I don’t remember the name of as we went to the Eagle. Cold air and 4pm sundown means Pubs are way more interesting then anywhere else.

I just went to check the Contiki page. They have apparently changed the itinerary to do Bath, Stonehenge and Bristol and not Oxford. I wish I had done that one. Oh well, special trip to Bath and Stonehenge goes on the list.

York was the next stop after Oxford. This was totally my favorite stop in England. York is really cool. The center of the old town is a road called the shambles with houses that are built out over the road, making them look like they lean. It is touristy but cool. I loved walking the old streets. On one square there was a store selling all manner of Cornish Pasties that were hot and wonderful against the cold.

At night we took a ghost tour. Ok, I don’t like ghost tours or horror films, but this one was really neat. York was founded by vikings so has a neat history. Oddly the only letdown was the Cathedral itself. Very impressive outside, but they charge to walk around it. To be forced to pay to visit a house of God bothers me. Still a neat building.

North from York brought us to Hadrians wall. The snow was much more prominent as we got north of York. Like a wall of snow Scotland approached. The bus wended some pretty treacherous looking roads to the ruins of a fort that served as a gate into the north. Hadrian’s wall was built by Rome to keep the Scots (and Picts) out of Britannia. Not much left, and even less to see in the snow, but still a neat place.

We then crossed into Scotland for the next few days. As this post is only dealing with England, I jump forward in the trip a bit. Stay tuned for the next phototour on Scotland. 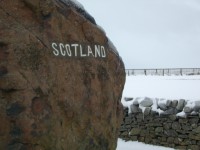 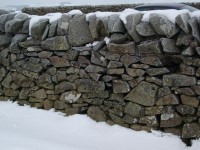 Coming back into England we spent the night in Liverpool. As expected it was a bit of Beatles overload. I did really enjoy the Cavern Club though. You go down a far many steps into an underground club. The barrel arched ceilings radiate Beatle mania.

The last stop was a town built by the romans called Chester, near the Welsh border. We only had a few hours, but it was a neat place to walk around even on a quiet Sunday morning. The main street in Chester is unique by having two levels to it. There is a street level of shops and one on a level up a set of steps. My favorite bit was seeing a store called “Bravisimo:Clothing for Big Boobed Women”. Not so much that there is a store like that, but the British English directness. Unfortunately my picture didn’t turn out.

We wandered a bit around the roman wall and theater and got to see the ruins of a house with central heating, reminding me how cool and advanced the romans were. Lead pipes weren’t smart though. Oh well. After this stop and another quick run to a Pasty shop for breakfast, we headed back to London.

The trip was a lot of fun. I am very glad I went on it, but really I also learned two things. First, that the north is not a great time to go visit in the winter. I am not against cold per se, but the dark bugs me. Secondly, I don’t take so well to bus tours. Too much time on the bus and not enough time on the sights. I fully get why they are popular, and I would not have been able to see as much doing it any other way. Though I think I will avoid them in the future, too much sitting in a bus isn’t my thing.

Stay tuned for the Scotland half of the trip.  The Related Posts below are some of the odder pictures I took on this side of the trip.

What I want to do when I visit Home Scotland Bustour