American Foods that Germans do not Understand

American Food is hard to qualify. What is purely American anyways? Most of what we think of is stolen/borrowed from other cultures and countries, adapted and sold back at a profit. Most Germans I have met have some experience in the US, either exchange or travel. However there are some foods that are classically American that are not well understood. Let’s see if I can fix that.

Inspired by a couple of posts by Sabrina at countryskipper.com Supposedly German and Supposedly Italian.

We even use the phrase “As American as Apple Pie”. It is a food symbol linked to the American Identity. My Grandmother was a pie-maker. She supplied several large pies to the family gathering every Thanksgiving. In classic American style, there is often an entire aisle dedicated to Pie. Pre-made crusts and canned fillings. I used to make a thing dubbed Triv Pie which was Graham Cracker Crust with a mixture of sweetened condensed milk and whip cream set with lemon juice as a filling. It takes like 10 minutes to make and is sweet and cool for summer. Ahh I miss pie.

Cake (Kuchen) is very popular in Germany. Cake and Coffee time in the mid afternoon is a very German thing to do. Cakes here are usually custard or bread based. Fruit is popular as a filling, but suspended in a custard mixture. Real pie does not exist here. A free swimming filling that oozes onto the plate when cut would not do in the cafes. That idea of flaky crust with gooey fruit filling is akin to Strudel, but not the same. Strudels are rolled or woven. They come to the bakery in all the various flavors (Cherry, Apple, even sometimes Pecan), but are not Pie.

So when I try to explain that I miss pie, some of my local friends (even non-American English speakers) say that we have tons of cakes and strudels, that is the same thing right? Nope, Pie is special.

Favorite Pie: Apple Pie at Macado’s in Blacksburg, Virginia. They serve it with a slice of melted cheddar cheese. 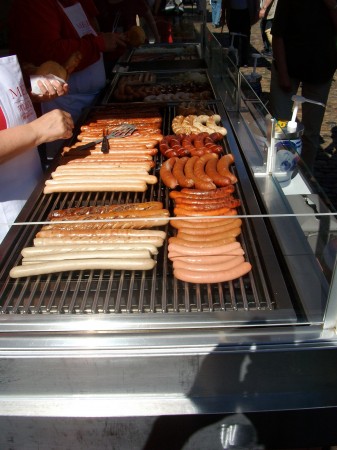 Germany is the land of sausage. It really is. This isn’t a stereotype as much as an accurate description of the place. Every single town and area has it’s own sausage type. Even our English names for things are Germanic town names. Frankfurters and Wieners come from Frankfurt and Vienna (Wien) respectively. Freiburg has its own Lange Rote sold in the Market place. There should be no lack of hotdog substitutes here. And in truth, the hotdog like sausages here are actually better quality than most hotdogs at home. This could then be the problem.

The first difference is that most of the dogs I remember from home are Kosher, thus all-beef instead of the ubiquitous pork here. Secondly, whether it is actually true or not, the traditional wisdom is that hotdogs are scraps of meat blended together. The Germans have this concept too. Fleischkäse (Meat-cheese literally) are large loaves of almost hot-dog consistency meat scrap blendings sold from street vendors in slabs on rolls. I have not been brave enough to try it. Normal bratwurst are higher quality meat blended with spices. The taste of the American hot dog is just different. The last difference is that American hot dogs are there as a base to put things on and around it. First off a big fluffy white bread bun. Then based on taste any number of toppings ranging from mustard to chili to cheese to relish. A bratwurst is served with a bare amount of bread and maybe a squirt of mustard or curry ketchup. The meat is the thing.

So maybe the Germans invented it and the Americans “ruined” it, I still crave a baseball park hot dog with nacho cheese sauce.

And their cousins: I haven’t even mentioned the idea of a corndog to Germans. I expect it would cause some imploding.

Popcorn is an American thing. Well ok, it originated on the continent that we call America. The Europeans got it from the natives(we won’t go into how, but it probably wasn’t as friendly as we would like.) Still corn in general and popcorn in specific is of more American origin than Europen. And thus I declare that it  is not supposed to be sweet in the movies.

Seriously, sweet popcorn is fine as kettle corn. Warm and gooey caramelized sugar or hard shellacked popcorn pieces in multicolored boxes with a toy. This is a fine and wonderful thing, but not the way it gets served in the movies here. Pre popped warm temperature popcorn in bags with sprinkled sweet powder. Really popcorn is ideally made for butter and salt. This is it’s natural habitat.

The best popcorn in my mind is airpopped hot into a bowl. As the popper is spewing out the popped goodness, set the bowl spinning and drizzle butter onto it. If we start as it is being popped, the butter gets to all of the corn, not just the top layer. Then once the popcorn is done, sprinkle plenty of salt. The salt sticks to the butter even partway down in the bowl. Then eat hot, preferably with a movie in the living room.

To Drink: Beer however is a very good mix with popcorn. Though again only the salted stuff.

One of the things that comes up in almost every group of Germans that I am with when we talk about American food is spray cheese. This seems to be their idea of the pinnacle of what is wrong with American food producers. As a culture of natural food that comes from fairly (really Germany is not that big) local places, the idea of cheese that can be sprayed from a can upsets, or at least intrigues, them.

I know about spray cheese. It was a novelty even for me when I found it as a teenager in the US. It really is cool to play with. Shake a bottle and spray a bright yellow paste onto a cracker. In the end though, this is one place where I will agree with my friends here. It really isn’t good. It is pretty greasy and tastes not so good. Once I have had real cheese here, I can fully understand why a European would see this as anathema. That said, I don’t think it is fair to pick on it too much.

It is a technological marvel. Like Velveeta it is a cheese product that dazzles with its scientific accomplishments. Cheese that can be sprayed from a can. In the end though, none of my friends thought it was more than a novelty. It is neat to play with, not a whole lot more. I don’t remember it ever being a staple in any house I ever visited or lived in. You buy it because everyone things it is fun, not for taste or culture. So really it is not a sign that the US food culture is deficient, but that novelty has value.

Did you know? That spray cheese comes in 4 flavors including bacon.

I actually quite like German food. Though I miss a number of things from home too, even if they aren’t very healthy.  There is something about the food you grew up with that is special.

So any other American foods that foreigners don’t understand?