Preparations for a Holiday

From the title I could be talking about buying and putting up a tree or having friends over for a beer fueled good time. Although those would be fun, no I’m talking about going to the grocery store. Wait don’t leave, it really is a preparation for holidays in Germany. Stores are closed on holidays and Sundays, so a weekend like this Christmas and New Years where Friday and Saturday are holidays will mean nearly three days before I can get more food if I run out. Today is Christmas Eve, stores closed anywhere between noon and 3pm here and will not open again until Monday.

This idea always seems to shock foreigners. It is a very common conversation before a holiday to remind newly moved expats that things will be closed for the weekend. They look a little dazed asking “why?” and then remember. Even travelers through Germany learn this fairly quickly. Though I think all of us from homelands where 24/7 commerce is normal tend to forget after a while away.

Ok, I admit, the opening hours of things here are my biggest complaint about the country. Not just that things are closed on Sundays (I’ll get to why I kind of like that), but that things seem to close pretty early in the evening too. It is changing though. I remember when I first started traveling in Germany, many stores closed at 2pm on Saturdays. As a student, it was annoying but not tragic. Now that I work a full week, it borders on frustrating. Thankfully for the single working population, this is changing. Some retail is open until 9pm on the weeknights and most things are open until 7pm. I even live near a grocery store that is open until midnight. Though due to local laws can only sell alcohol until 10pm. When I work until 6:30 many nights, getting shopping done reduces either to lunchtime and after work quickly or Saturdays.

There are benefits to this though. I was having this conversation with a friend and he remarked that having Sunday be different forces people to rest. It helps set up a weekly cycle as well. Sunday is a day where you cannot go shopping, so you have a day to do other things. It is very common to see trains full of people in the summer headed into the forest for Sunday hikes. Cafés are full and the streets are relaxed. So while it would be nice to be able to spread my shopping stress out to two days, having no choice but to hang out with friends or relax at home can be nice too. The same goes for holidays. I like not feeling like I need to force myself out of the house to get stuff done. Not to mention the instant holiday mood-killer of mattress sales commercials.

If you really need something, of course there are other options. Movie theaters are open. Trains run on holiday schedules.

Train stations will be active and the shops there should be open. Freiburg station has a market in the basement that is open until quite late. The bakery there should be running on holidays like it does on Sundays. The drug store should have holiday hours as well, as I am pretty sure I have been in there on a Sunday. The station really is your best bet to get supplies. This is true in most cities, although I can imagine some villages without a station will be completely shut down. Some bakeries have Sunday hours, so they could open on holidays as well, but I wouldn’t rest my stomach on it.

Gas stations are the other bastion of the unprepared in Germany. The station near me is open 24/7 and others I know of are open until 10 pm on Sundays as well. Think gas station almost anywhere in the world. The selection is mostly beer, candy, chips and soda; though my station has a few frozen pizzas and a little bakery case with pretzels as well.

Lastly, while retail is closed restaurants do a brisk business. The irish pub often runs brunches and shows soccer games on Sundays. The Freiburg sports club plays a lot of matinee Sunday games as well. So the local cafe culture is there to be enjoyed. Some restaurants, especially out from the center of town may be closed tomorrow, especially if they are family run. I’m ok with that and just head into my favorite pub or pizza place in town if I need to get out. 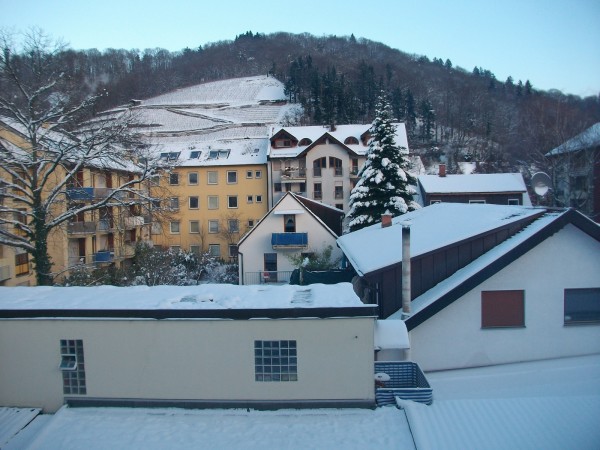 this morning I trudged through the falling snow to get a few things during the half-day of opening hours. Sure, I could go to the restaraunts and may do so, but really I need supplies for a long weekend home. Chips and cola for the hours of video games while watching the snow and enjoying the quiet between visits to friends for Christmas dinner.

Enter the Figgy-Pudding Authentic vs Traditional