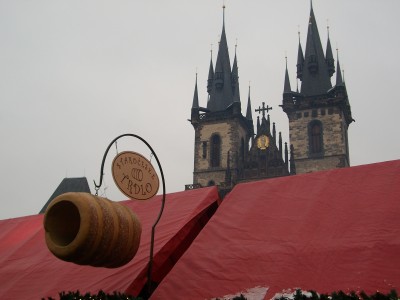 Winter is the time of Christmas Markets in Europe. Think freezing cold wind, tons of people, hot spiced wine, sausages and rows of stalls filled with things to buy. Mostly I go for the experience and for the hot wine. In the cold, it is almost better to have the hot mug in your hands than actually drink it.

This year due to visits to friends and other trips I have not spent much time in my own local Freiburg market, so I have no pictures of it. I do however have pictures from the markets that I have had a chance to spend time in so far.

I went to Prague with my girlfriend for the first weekend of the market there. We had a great weekend together.  Just like at Easter, the market is in Old Town Square as well as Wenceslas Square. They had Trdlo again, and I caught a snippet of how they are made on video.

The weekend after Prague I went to visit a friend in Bamberg, which is in Bavaria about an hour from Nuremberg. They had a market with orderly rows of stalls selling all kinds of Glühwein. The hit of the season for me is the Blueberry wine. In Germany, when you buy Glühwein you also pay a deposit for the mug. A lot of the mugs this year seem to be in the shape of boots, but the normal mugs abound as well. It seems quite common to just not get your deposit back and keep a mug.

This is the largest and probably most famous Christmas market in Germany, and it is indeed something to see. The market is spread across several squares in the center of town. This in addition to the streets to and from the train station which are lines with stands. One side square had a set of stalls with the partner cities of Nuremberg. I saw Oreos and Skittles at the Atlanta booth.

Each area in Germany has their own sausage and their own beer. In Nuremberg the sausages are small and spicy, kind of what end up as breakfast sausages in the US. You get three on a roll here. See the can of 10 in the picture. Check out the gallery below for a picture of tons of the little wurst on a grill.