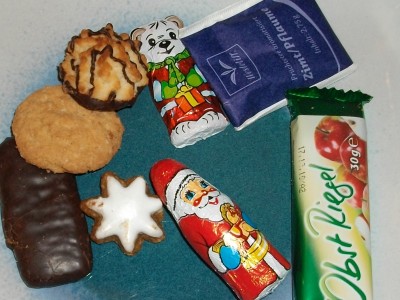 One of the interesting parts of being in another country is their holidays and festivals. This is either a planned event like going to Oktoberfest or a random happenstance when you are traveling. When you live somewhere that has different holidays than you are used to, then you get to experience them differently. Today is December 6 and Saint Nicholas Day in Germany.

December 6 is not an governmental holiday where shops are closed and you get a day off, but every child knows it here. This is the celebration of the birthday of Saint Nicholas and a day of presents for children, usually sweets or other food. This is the same figure that got warped into Santa Claus in the US. The tradition that I remember closest from my childhood was the hanging of stockings. Here on the night of the 5th children put out their shoes for sweets.

Ok, this seems like a fine holiday tradition not too far from traditions that most Americans would recognize. Actually this afternoon in my office there were a large group of kids running around and a colleague dressed up as Saint Nicholas. Almost like the US, even down to admonishing the children to be good.  However it goes further in several different ways.

Like most cultural traditions, it seeps into adulthood as well. When I come into work this morning, chocolate Nicholas figures had appeared at each place. Looking in stores, these can range from the standard looking santa’s to realistic Nicholas’s with a staff and more religious style hat. It certainly is a nice lead into the holiday season when Christmas is three weeks out. Either that or it just hypes up kids on chocolate.  Don’t mind me as I jump up and down a bit, I had an 80 gram chocolate Nicholas figure for snack today. Wheee

As a last bit for my Saint Nicholas day story, I was visiting a friend in Bavaria this weekend and she prepared little goodie bags for the holiday. She even put them in our shoes while we were asleep. Ok, I don’t have the memories of excitement from childhood that a German might, but that was really nice. In fact the cookies pictured above are from that package. Thanks Sarah.

Wiki Links Above is what I experienced, but Wiki is kind of neat for some extra history. http://en.wikipedia.org/wiki/Saint_Nicholas#Germany