As part of my mad dash about the Greek mainland, I wanted to also see the Ruins at Delphi. From Meteora and Greek Orthodox Christian monasteries I traveled on a long bus trip to Delphi and the Ruins of the Temple of Apollo there. I got there late at night and only had the morning to see the ruins.

In addition to the standard gobs of photos in a phototour, I have two short videos to share. I bought a handheld camcorder as my new toy for the trip. I’m still learning, so they are a bit shaky, but should give an idea of the ruins.

The town is pretty cool. A few long streets connected by steep stairways perches above a long scenic valley. Way down below is the town of Itea, where apparently all buses in the region must stop and change people. The actual ruins are a 15 minute walk out from town. The main site has a museum and the large section of ruins that crawl up the mountainside. 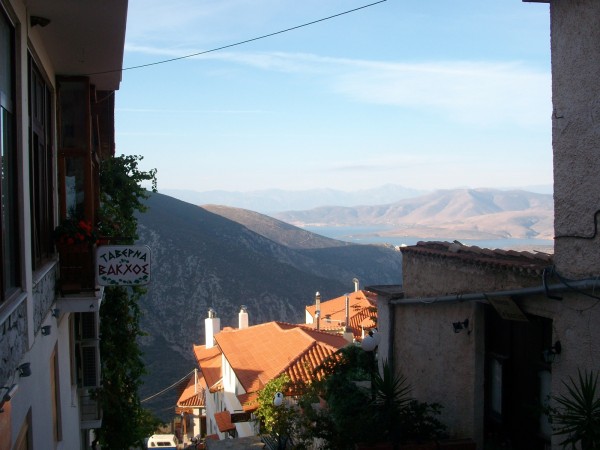 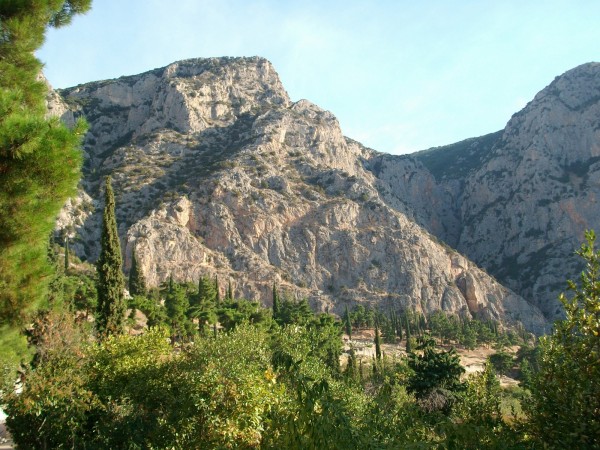 In walking around I missed one site that I had seen on postcards. Yes, I peruse postcard stands to see what pictures I need to take at a place, or what pictures to avoid. The thing that I had seen was an arch of three pillars with a stone on top. There is apparently a second section of ruins down a ways. I could see it from the road, but did not feel that I had time to get down there.

One of the things I thought was cool about Delphi was why it was apparently important. At one point they found a sage here that told oracles based apparently around hallucinations given to her by sitting around a rock that gave off volcanic vapors. I always heard it was some vent in the ground, but it seems to just be a rock. This I learned from overhearing the German guide.

The most famous view is a set of 5 pillars that remain from the main temple of Apollo built at this site. From the postcards I kind of thought they are in a circle like a gazebo. Nope, they are the last remaining corner of a large Greek Temple. In a lot of ways these are the ruins that I expected from walking around in Athens.

Above the temple is a well preserved semi-circular theater. Some of my favorite views are looking down into the magnificent valley with the theater and temple in the foreground.

I kept walking upwards through the ruins. At the very top is a stadium. I found it somehow strange that a site dedicated to the sun god had not the temple at the highest point, but a place for sport. The stadium didn’t really look all that different than a modern one for being thousands of years old. Though it was obviously in ruins compared to the restored stadium in Athens.

There are signs saying no food or drink in the ruins, so I ended up sitting outside to eat my nuts that I had brought to snack on. There are here like in Athens, cats ready to take what they can.

I took no tour and just wandered around the ruins. In all I think I spent an hour and a half. I felt this was plenty of time, but may have actually done the museum if I had known how long the wait for the bus was going to be. Definitely take the walk and admire the valley. I get why people thought this place was special.

Heading back to get my bag and arrange bus travel to Patras, I ended up getting something to eat and sat in a cafe with free Wi-Fi and enjoyed a Frappe with Baileys. It was so nice to have a quiet almost normal feeling sitdown amid the rushing travel of the past few days.

Thankful Metaphor Trying to Do Too Much