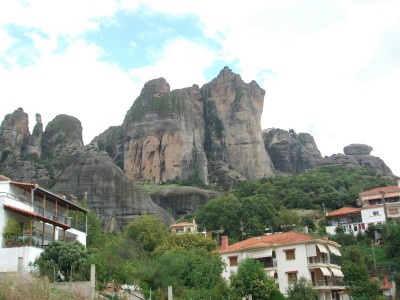 I had seen pictures of Meteora while planning the Greece trip. I thought it was too far out to get to reasonably. Despite this, I sprung and went up to see the site. It was really awesome, and the highlight of the mainland half of my Greece trip.

As with all my Phototours, there is a gallery at the bottom with even more pictures. If you want the story behind the pictures, read on.

The site is actually pretty easy to reach from Athens by bus. The trip takes about 4 hours. The town of Kalampaka sits below the towering rock faces which have monasteries on top of them. This was my base to explore the area, but also my favorite town in mainland Greece by far. It was peaceful and yet had tourist infrastructure, so didn’t feel like the back end of nowhere. I had the best pita of my trip for only 1.50 Euro here. Expect another post on Kalampaka itself shortly. 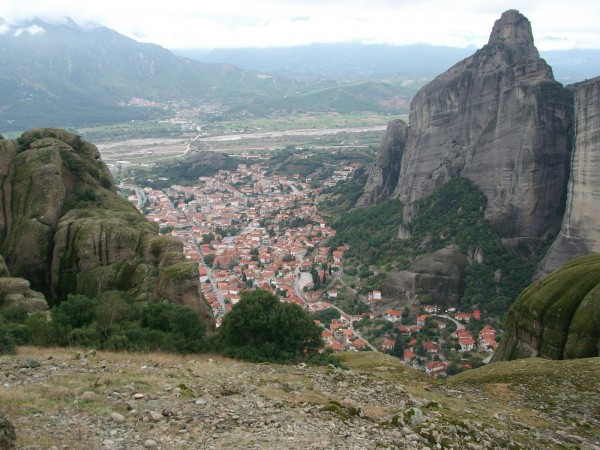 To get up to the ridge where the monasteries are you can either walk up paths or take a bus. I had heard about the bus and figured it rain every 20 minutes or so. No, it runs once in the morning at 9am, conveniently 5 minutes before I walked into the station, and once at 1pm. I ended up taking a cab up, which was kind of neat as I got to chat with the cabby. Apparently there used to be 26 monasteries in the rocks, but only 6 remain used and visitable.

I was given a helpful map by my hotel with all the paths listed along with the opening hours. They all are open different days and some close for lunch. I decided my best bet was to start at one end and walk to the other, taking a marked path back down into town. The weather was warm, but foggy. At first a little disappointed at the fog, but it lent atmosphere to the pictures.

Tip: check the bus schedule the night before.

Dress Code and the Lending Pants

The monasteries are still active places of worship and enforce a standard church dress code. So cover up ladies and gentlemen (no shorts for men). Though if you forget, they have loose pants and skirts to lend to tourists caught unawares. Bright gaudily patterned thing, that I can only imagine are done like that to avoid people stealing them.

Holy Monastery of the Great Meteoron

The largest monastery and my first stop was Great Meteoron. It was crawling with tourists. 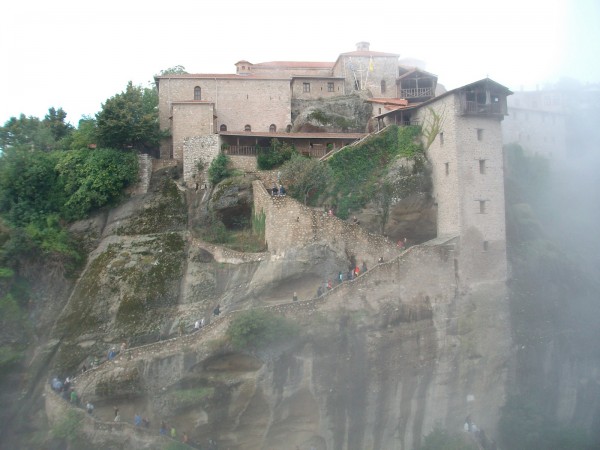 My favorite part of the place was a large mural painted over and around a door. It had Jesus above and rows of men to either side, each with a scroll. Reading the plaque, one row were indeed biblical prophets. But amazingly cool to me, the other line were Greek Philosophers. On their scrolls were quotes they said about God. Some predate Christ by centuries and echo the prophets. In others just the Greek obsession with math and science still allows them to muse about the Almighty. I found it truly cool to read, unfortunately I couldn’t find any book or card that had the English of the scrolls. 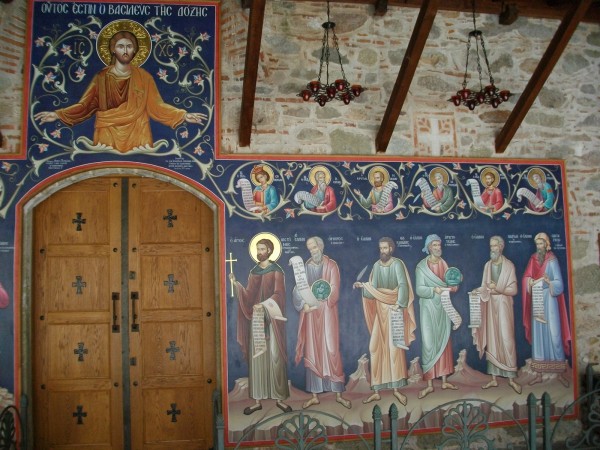 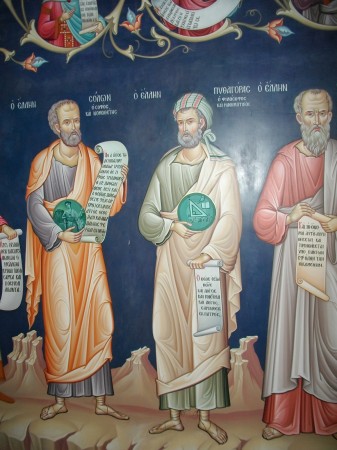 I walked around to Varlaam monastery second. It was smaller but equally as interesting in places. They were actually repairing the roof here; so these places are still in fairly good repair. 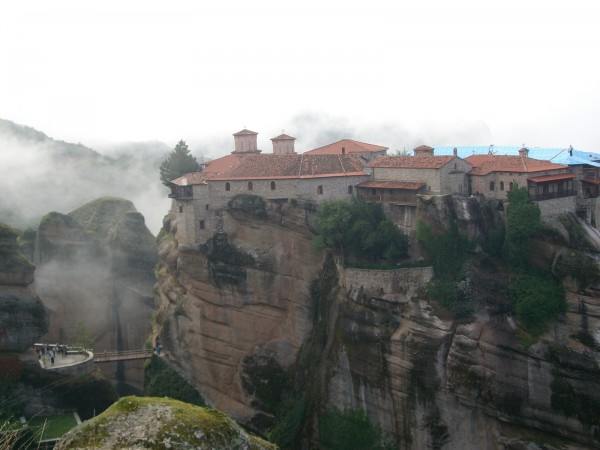 Upon leaving the place walking down, I talked to a guy that I had seen on the bus coming into town the night before. He was from Japan and we talked for a while about all kinds of stuff. Itto was on a 22 month round-the-world. We ended up making plans to hang out at dinner and he went to take a different path down, as I went walking along the ridge. 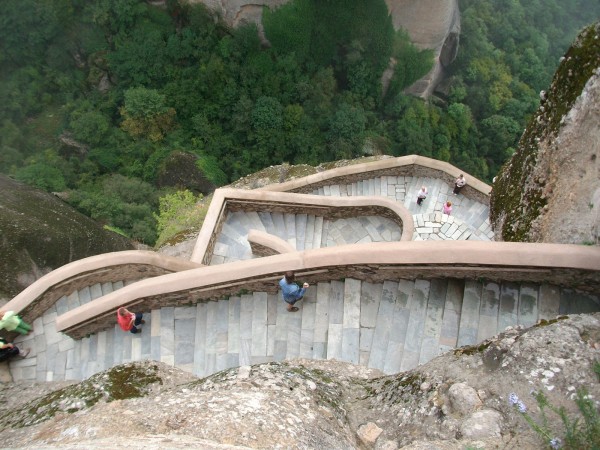 Rousanou was the one that was closed on the day that I was there. Nicholas Anapausas was where my new friend Itto had hiked off toward. It was not on the main road so I decided in order to be able to get to see the others, I would skip it. I did get some nice background pictures though. Great thanks to the kind girl who took a really great picture of me. 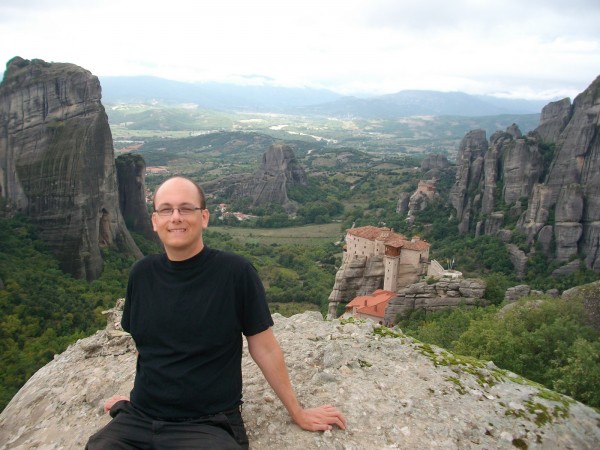 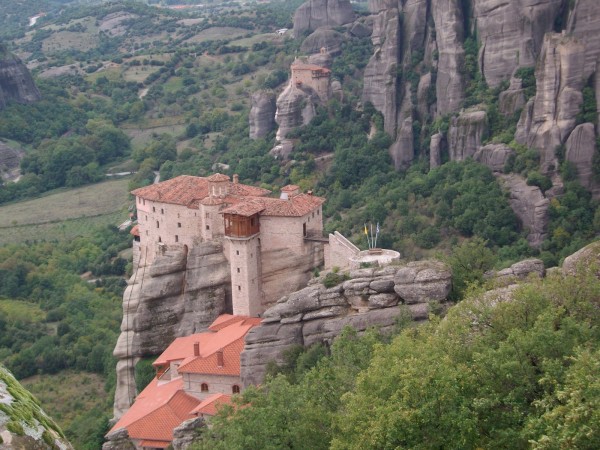 St Stephan monastery is at the other end of the rock formation from the Great Meteoron. It is run by nuns as opposed to monks. Again swarming with tourists, perhaps due to the easy bridge entry opposed to large amounts of steps. 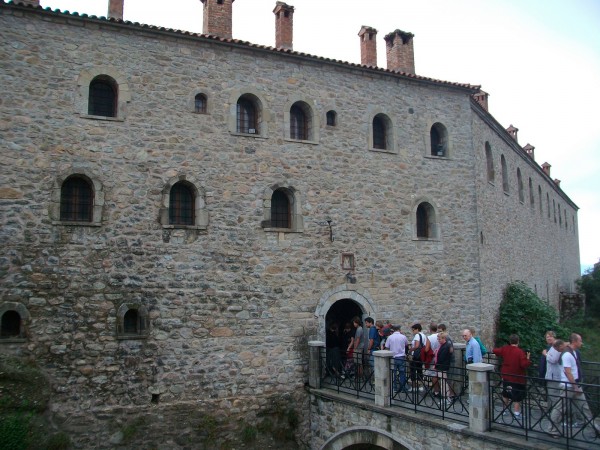 This one was closed at lunch, so I was glad to get in and see it before the several hour lunchtime. I quite liked the atmosphere in this one. It felt secure and peaceful without so much the isolation of some of the others. 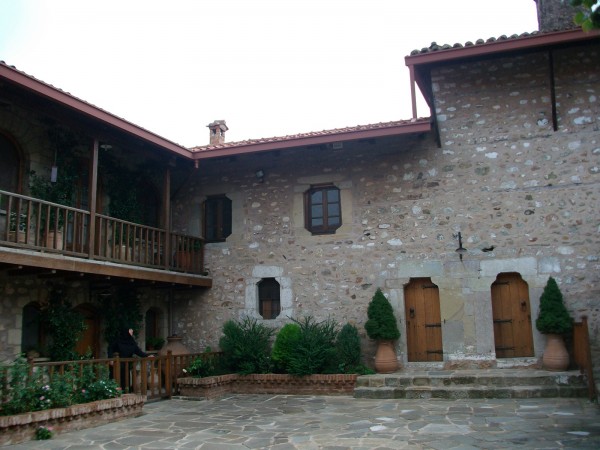 Monastery of the Holy Trinity

This was my last stop and the smallest of the places. Also the most trying to get to. In order to reach it by foot, you walk down into a valley across to the pillar and then in a stairway cut into the side of the rock very much up to get to it. It was also under construction, so nice to see that they are being kept up. 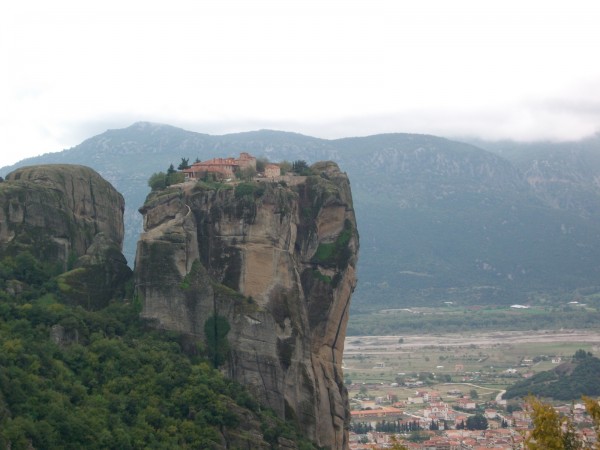 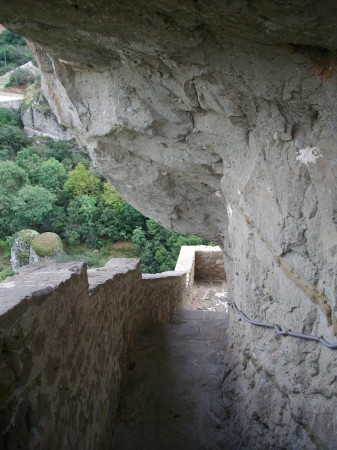 As suggested by my hotelier, I took a marked path at the base of the Holy Trinity pillar back into town. 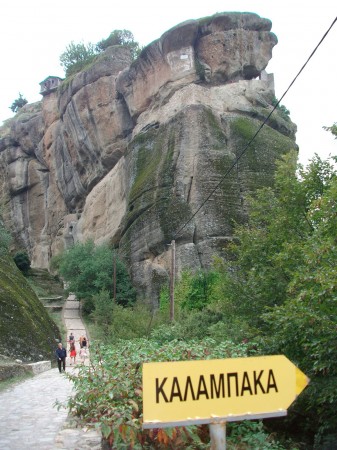 It was fairly well marked but rugged forest path. It had rained the night before, so was wet in places. Thankfully I only fell once.  The most frightening part was meeting the goats. Um, goats on TV and in pictures don’t look fierce. This band of goats however seemed much more frightening in person. Some nearly up to my shoulder tall and with horns. I did finally make it through and back down into town. 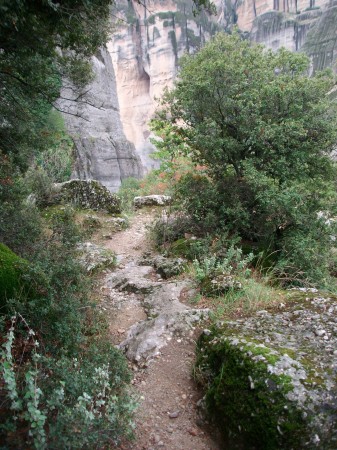 I have seen some of Itto’s pictures from the next day when it was sunny and it would have been amazing to see. Though I was sweating even in the cloud cover, so full sun may have been too hot for me. Being able to walk through such amazing places built on pillars in precarious places by dedicated monks was very moving. Despite the hassle to get here and home, I think it was well worth it. There are bus tours from Athens (I saw enough tourists and dodged enough buses), but I would still recommend coming on your own for a few days.